Congresswoman Bachman calls for a return to McCarthyism

The truly sobering thought is that this is just the beginning. Demagogues used to get away with this because they could say the truly batshit insane crazy stuff to their crowd and still present a moderate facade because they were on “home turf”. With the Internet we can erase that distinction and bring the crazy home for everyone to see.

One could make a case for this being the onus behind the popularity of The Daily Show, being able to query context and content and display them side by side, exposing blatant hypocrisy and cherry-picking.

But who will protect the freedom of our light bulbs?

This is the sort of nonsense I’d expect from someone in bed with the industry… but the industry thinks she’s crazy too.

So she is a member of the Phoebus Cartel too? What’s next?

Cool. I’d never heard of them and now I learn that Scandinavians busted their ass.
You owe us for cheap light bulbs (and cheap wooden furniture with weird names).

Wow. Of all the scary shit I’ve seen in the past couple months, this has to be the scariest.

Scarier even than this:

You know what the best part of that whole thing was? She ends it by saying Hillary Clinton for President and dancing around! That, and the other folks all laughing at her or hiding their faces.

I also liked how she was cool with Obama being black, BUT HOW DARE HE BE AN ARAB! This country is awesome.

Ha. Now the Tinklenberg campaign has announced that in the 24 hours since Bachmann made her comments, they have raised almost half a million dollars, and the donations are still rolling in.

The Congresswoman issues a statement. 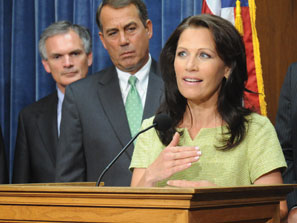 'I never called all liberals anti-American'

Minnesota rep explains her recent "Hardball" comment that Obama may have “anti-American views.”

But when you can’t win on the issues, you steal the election with a couple of lies and $1 million worth of mud. And the media reports and Democrat responses to my interview on “Hardball” have been echoing the outright lies of the liberal blogs. Is it really any wonder people are so cynical about politics?

So she opens her stupid mouth, gets burned for it and it’s someone else’s fault. So typical of people like her.

I thought it was pretty funny that the Republican that ran against her in the primary has reopened his campaign as a write-in campaign.

These are not people who know anything about my policy views.

Read her bio on Wikipedia. Makes most other evangelical theocrats seems quite reasonable in comparison.

It would be nice if she lost her election over this nonsense, but, it would be a blast to see a MN congressional group that had both her her and Al Franken in it.

Quote from some liberal rag:

Bachmann’s track record in the legislature reads like a parody of right-wing talk radio. She has introduced or signed onto bills that would make English the official state language, halt grants to clinics that perform abortions, make proof of citizenship a requirement at voting booths, and allow stillbirths to be officially designated as births by the state. Bachmann is also the legislator behind the Reagan fetish at the Capitol this time around, proposing that Interstates 494 and 694 be renamed Ronald Reagan Beltway, and declaring February 6, the dead president’s birthday, officially recognized.

The old guard within her own party is not impressed. “I wish she would get on with something meaningful,” says one GOP insider. “She is definitely not out to unite people. She’s throwing out these ideological bombs. She’s an obstructionist.”

I hope the election finds her on the outside without a clue of how to get back in.

Yeah it’s pretty common, more so the past 10 years or so maybe?

I think that Bachmann is getting overly harsh treatment here. She is an obnoxious fool who shouldn’t be in an elected office, but she never said that liberals are anti-American, and, reading about it, I doubt that she thinks that. I would say that “Bill Ayers is anti-American.” is a reasonable statement.

This has seriously damaged her chance to be reelected, which is good, but the virality of the scandal is at least partially due to her statements being mis-characterized, which is kind of sad. 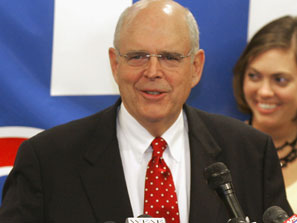 But Hayes now says he didn’t mean it that way and was just trying to fire up a campaign rally.

Rep. Robin Hayes (R-N.C.) has conceded that he did tell a North Carolina crowd that “liberals hate real Americans that work and accomplish and achieve and believe in God,” even though he initially denied making such a statement.

Hayes had followed Rep. Patrick McHenry, also a North Carolina Republican, who laid out the choice between McCain and Obama.

“It’s like black and white,” yelled someone from the crowd.

I would say that “Bill Ayers is anti-American.” is a reasonable statement.

I don’t think I know enough about him to judge, myself, what I meant was that I think that it could be argued, reasonably, that it is true.

No. She didn’t say all liberals were Un-American. I’m not sure where that came from, to be honest. She did say that someone should investigate Obama’s un-American tendencies. And when asked if there were other people in Congress, she did say investigate them too.

I think that Bachmann is getting overly harsh treatment here. She is an obnoxious fool who shouldn’t be in an elected office, but she never said that liberals are anti-American, and, reading about it, I doubt that she thinks that. I would say that “Bill Ayers is anti-American.” is a reasonable statement.

MR. MATTHEWS: So this is a character issue. You believe that Barack Obama may – you’re suspicious because of this relationship – may have anti-American views. Otherwise it’s probably irrelevant to this discussion.

MR. MATTHEWS: So you believe it brings into –

MR. MATTHEWS: So you believe that Barack Obama may have anti- American views.

REP. BACHMANN: Absolutely. I’m very concerned that he may have anti-American views. That’s what the American people are concerned about. That’s why they want to know what his answers are. That’s why Joe the plumber has figured so highly in the last few days –

MR. MATTHEWS: Okay. I’m not going to get off this.

REP. BACHMANN: – because Joe the plumber asked a question that a lot of Americans want to know.

REP. BACHMANN: Well, I would say that people who hold anti- American views. I don’t think it’s geography. I think it’s people who don’t like America, who detest America. And on college campuses, a Ward Churchill, another college campus, a Bill Ayers, you find people who hate America. And unfortunately, some of these people have positions teaching in institutions of higher learning. But you’ll find them in all walks of life all throughout America.

MR. MATTHEWS: What about people like Nancy Pelosi and Harry Reid, the liberals you were mentioning a moment ago? Where would you put them? Would you consider them anti-American as well?

REP. BACHMANN: I would consider them to have –

MR. MATTHEWS: Are they anti-American?

MR. MATTHEWS: The speaker of the House is –

REP. BACHMANN: I will say the speaker –

I think her treatment is, if anything, not harsh enough. In fact, I think it’s impeachment-worthy. She is asserting on national television that the elected leaders of one of the two national parties in this country are anti-American terrorists.