Dominions 5 - There is no I in team, but there is in Disciple Games

Just noticing some of the debuffs they added for SC chassis. Is this new? I don’t recall seeing them before. some of them have -4 (per path) for rituals and/or smithing and/or researching. That’s just horrible…

Not sure which you refer to. Some monster pretender, maybe?

The debuffs on Monster Pretenders is something that several balance mods added, to reduce the domination of monster pretenders, like the Three Horned Boar.

I think both Dominions Enhanced, and the Colab Balance Mod do that.

I don’t know if Illwinter added that, but they may have finally followed suit.

Ya, it’s probably one of the mods - if so, it’s not one i like. Looks like it’s balance mod.

In the base game, there are almost no trade offs not to take a Boar or Wyrm or Linnormr or other OP Monster. You get a awake pretender that can provinces with little risk, and comes with Incarnate blesses like Regeneration, and can easily cast high level globals.

The only competition they have is Imprisoned Rainbows or Scale heavy Immobile pretenders, but even then, the monsters were usually heads and tails better. So, the Monster penalty was born. It still was OP for the purposes of bless and taking province, it just was less useful in the late game. This helped balance it out against titans, that were much weaker in the early game, but more powerful in the late game. And even then, Titans were only made viable in many mods by making them cheaper. 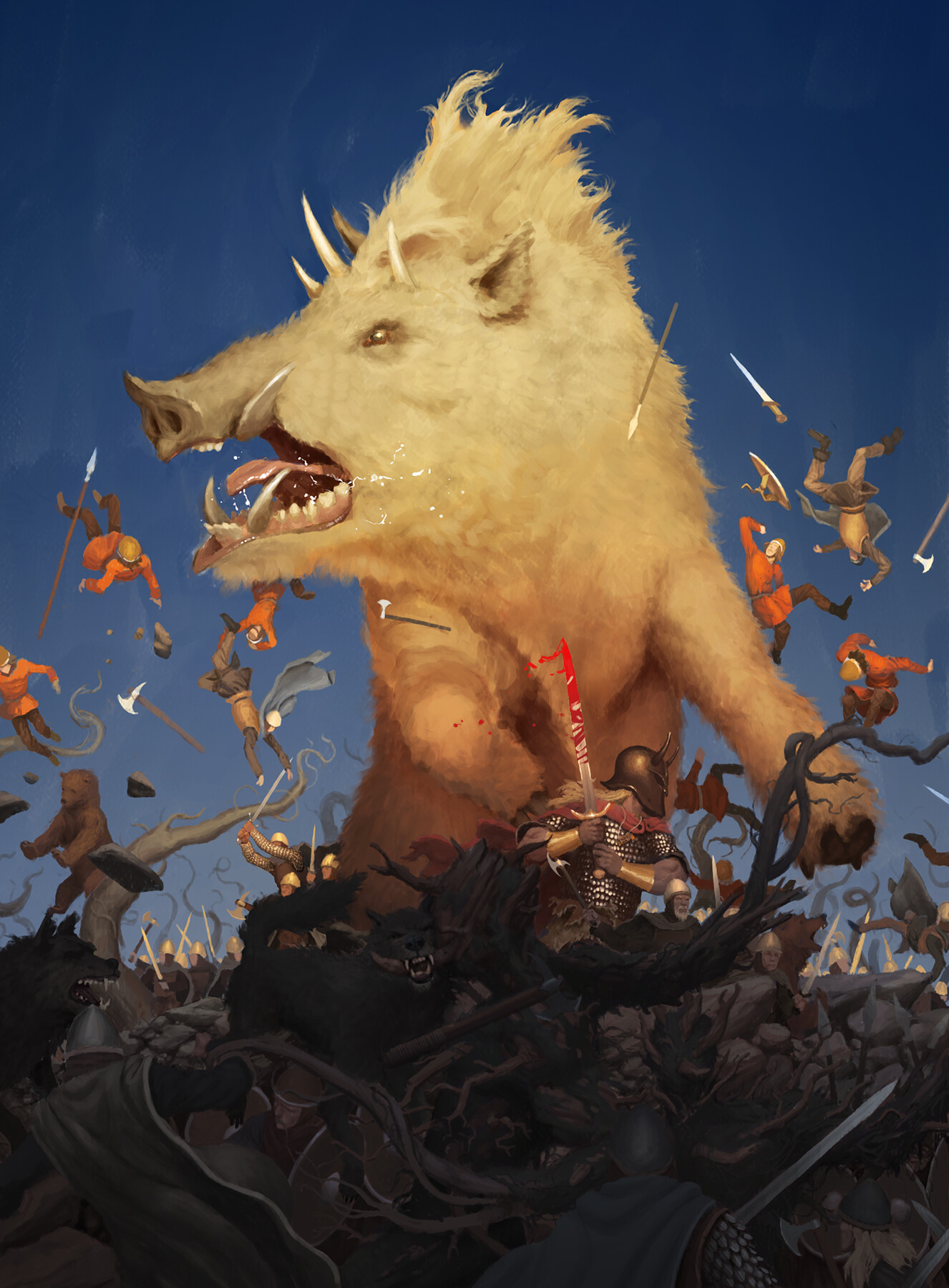 WTF? Why would this kind of independents guard a mere forest? 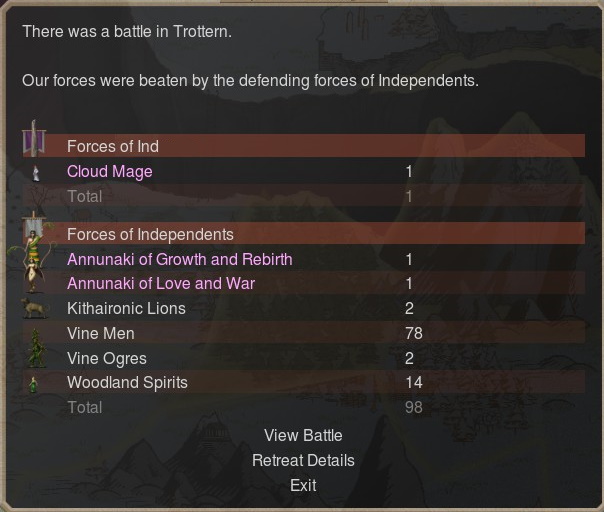 Does it have a throne in it? 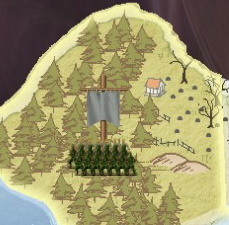 There’s a really zen bruce’ism about this moment - damnit if i can remember it though. Any help?

Another question: I found a dragon mountain once. Its description said that an air mage can enter it in order to summon a draconian. But when one of my mages did enter it, nothing happened. Does anyone know how it’s supposed to work? My google-fu failed me.

There’s a few different sites like that in the game, but they all work the same. Move your guy on the province, make sure they have the requirement (air, death, etc), then in the character action drop down(top left), you’ll notice there’s an ‘enter site’ command. Do that, and they will.

It’s the same if you were to tell a commander to research, or partrol or raid…

Do they have to spend several turns there?

they can. Every turn you’ll get whatever the site is about(draconian, in this case). Cant remember if it will show up in the province forces or already attached to the unit(like an army).

Edit: my bad, didn’t notice the draconian added to one of the commander’s squads.

Random question out there. I’ve been test playing all my nations for this upcoming disciple game, but I’m beginning to wonder if Xibabla is broken? In every game I’ve played now (think i’m at 10), they’ve generated unrest in their capital and I can’t figure out why. The first few times, it was so innocuous that I didn’t even notice until it was over 50 and by that time (and since their flyers are -1 patrol), it’s hard to get it back to normal. But even then, i’d have 50 flyers patrolling at any time and it would still repeatedly get to 10-15. In the last few games, I’ve been focused on it, and I find the first ‘seed’ of unrest typically starts on round 3 or 4.

I can’t find any cause for this. Scales don’t explain it. And I haven’t summoned any Onaqui(unrest causing demons). My one remaining theory is that for whatever reason the map/game has yet to spawn Xibalba in a cave(like it does for agartha) and that maybe outside a cave xibalba forts generate unrest? Anyone have any experience with them or know the answer?

No. I would definitely ask on the forums or the discord.

It should be easy to test. Just a new game with Xibalba adn pass a dozen turns.
Here I played until end of year 2 and I still have unrest 0

You can check the province history of events with key i.

Are you playing with some mod?

Strategy Youtuber DasTactic has started a new Dom 5 series for beginners. This information is of no use to just about everyone reading this thread, but just in case a newcomer wanders by: 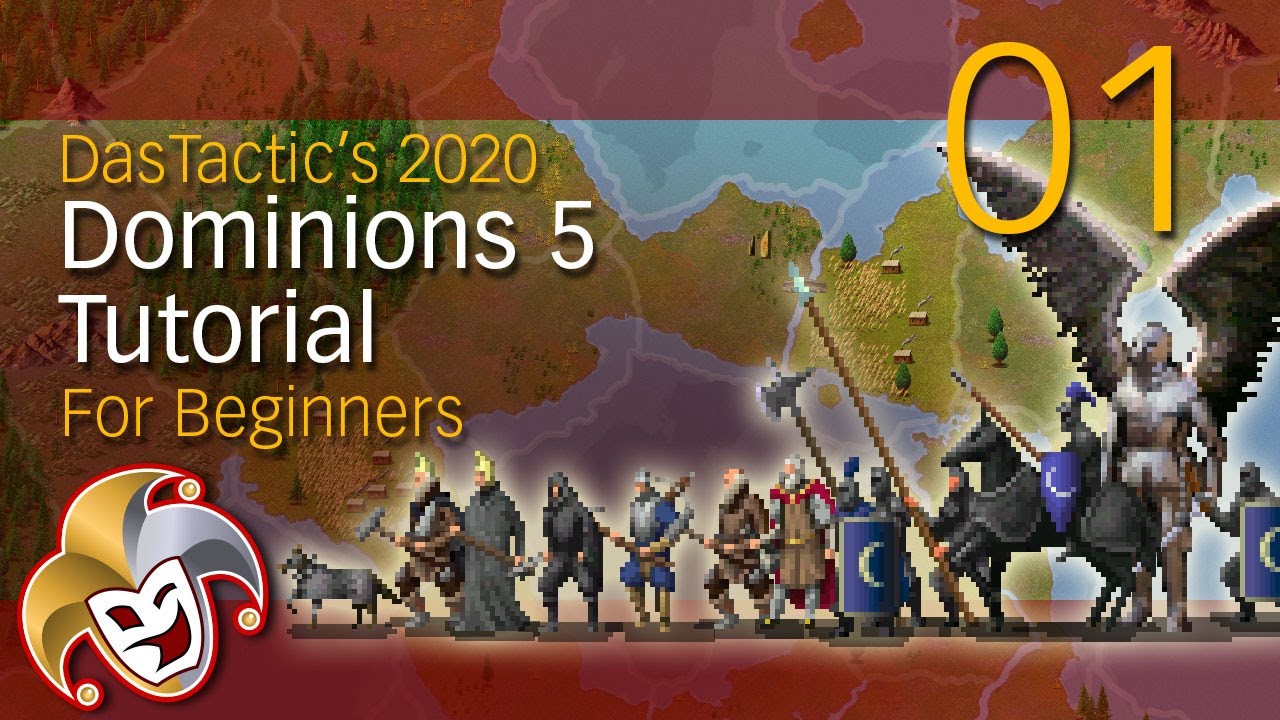 And it is currently on the Steam sale for 40% off. What better time to jump in!