I don’t quite get playing with tagging enemies. I have all that shit disabled. Integrated wallhack? What a stupid concept.

I don’t use any of those animals. Dumb gimmicks.

This has the worst map I can remember. Not Yara, the thing you get on pressing M. For mouse use anyway. Stupid zoom levels, stupid scrolling.

This has the worst map I can remember. Not Yara, the thing you get on pressing M. For mouse use anyway. Stupid zoom levels, stupid scrolling.

It is annoying to be sure. The game world is great, the map, not so much.

I love that angry cock, but you are dead on right about Guapo’s self-revive. Set it, and forget it!

OK, so you know how you get sent pictures for some missions? How the hell do you bring those back up if you miss them because, say, you’re busy flying a helicopter or wing-suiting through a canyon or really anything you need to pay attention to?

Switch tracked missions then back again.

or press B (keyboard) IIRC. 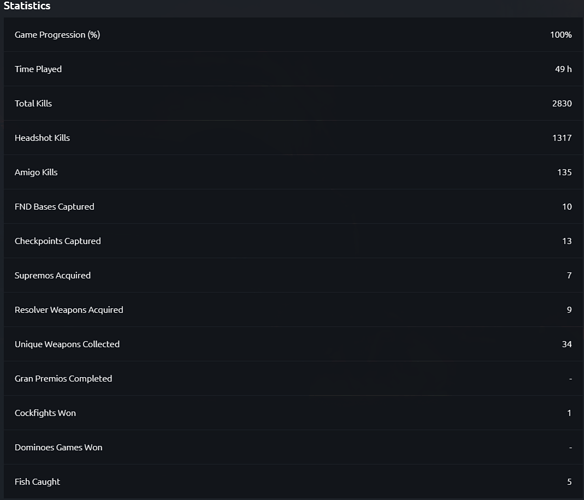 About the ending: Really, I don’t see many other ways they could have done it and not been super hokey. The whole vibe all along was that violent revolution failed to accomplish its goal in '67, and wasn’t going to work now, either. Though I kind of wanted to shoot Juan several times.

The way they let you continue to play in the game world after the final mission is pretty nifty, though how long it will sustain interest is tough to say. Beats a New Game + sort of redo at least.

All in all, good times for what it is. Not terribly memorable in any particular way though.

The way they let you continue to play in the game world after the final mission is pretty nifty, though how long it will sustain interest is tough to say. Beats a New Game + sort of redo at least.

What way is that? It’s kind of fascinating to me how open-world games insist on remaining open in perpetuity, so I’d be curious to hear specifics about what Far Cry 6 does that’s different. Feel free to spoiler the text if you think it’s a spoiler.

Although I’ll probably never get there. I lost interest and uninstalled this a while ago.

Every week there’s a new “insurgency”, where a section of the map is retaken by Castillo’s forces. You have to go there and conquer those bases all over again, and then you get a mission to kill a named dude, at which point you get a bunch of “moneda”, the currency given in the instanced operations. Each week there are new “overclocked” weapons to buy for moneda, which are extra powerful, alongside gear and cosmetics.

They also release new instanced operations maps every week, and I think there are 3 more of those to go. I didn’t really enjoy them though, the end bit where you need to run away while staying in the shade wasn’t the part of FC I enjoy, namely skulking around bases and popping heads.

They’re also releasing 3 free mission packs, crossovers with Danny Trejo (not a character, the actor, because I guess they thought it was funny pairing Danny and the player’s character named Dani), Rambo (tie-in with a movie coming out soon, obvs), and Stranger Things.

And then the three pieces of paid DLC from the season pass star the villains from the previous 3 FC games, which sounds like it could be cool. Unknown how much content all this stuff actually provides.

The season pass also includes Far Cry Blood Dragon for some reason. It isn’t a reimagining or remake or anything, it just includes that game.