“An astronaut named Gary and his planet-destroying sidekick called Mooncake embark on serialized journeys through space in order to unlock the mystery of where the universe actually ends and if it actually does exist.”

Well, the truth of the matter is, this is the first I’ve ever heard of it. Looks like it’s on Amazon Prime so if this will fill the little Futurama shaped hole in my life, I’m in!

I must see this.

There was a thread about this, or at least chatter in the Netflix TV show thread, where everyone was negative. Including me, although I can’t remember if I bothered to post about it and I only watched the first two episodes.

Everyone weren’t negative. I, for one, said I hated the first couple of minutes of the pilot, but enjoyed the show overall. @Scott123 and @SlainteMhath also liked it.

I really hated the first episode, but always meant to go back, as I’m a sucker for animated scifi comedy. It’s on the list, at least :)

I did enjoy it. Given that they are only 30 minutes on network TV, you should be able to binge the episodes very quickly streaming them. That should get you over the rough beginning quick enough. Once Avacato shows up the show becomes much more enjoyable.

I also enjoyed it. It got a bit cheesy towards the end but other than that it was funny (especially if you like gore humor).

I watched the first episode and I hated it.

But some people said it gets better so I gave the second a chance, but it was just as bad.

Then for some reason I watched the third, hoping this might finally be the one. But it wasn’t, it sucked.

And then I gave up. I have no idea why I tried so hard to like the show when it was clearly awful. Maybe it’s because it’s 'my kind of thing" and I’m definitely in its target demographic? It definitely looks nice and it’s very well produced. The only problem is that the writing is awful. Which is kind of important .

I’ve made an agreement with myself not to feel tempted to give the fourth episode a go, no matter how often the advert on Netflix makes me think 'maybe it’ll be good this time?".

Everyone weren’t negative. I, for one, said I hated the first couple of minutes of the pilot, but enjoyed the show overall. @Scott123 and @SlainteMhath also liked it.

Oh, oops, I guess I only heard what I wanted to hear!

In comparison, for me at least, Disenchantment is a 1990’s stale joke told so many times its as bad as watching Friends reruns. A female lead that has sex! Wow ha ha! Hilarious. Please shoot me.

I thought Final Space does a good job in some ways, with decision making where characters have tough or impossible choices to make. The art set pieces and action clips are great too. The violence was a bit off putting but served to raise the stakes I guess, I can let it go in a goofy animated show where I find live action violence such as the Marvel series fairly intolerable.

I don’t think it’s a comedy though, its more an adventure fantasy series. 7/10 and worth watching in my book.

Watch it. It’s great. Conan 'O Brian is an Executive Producer and is also in one episode as guest star. Very funny.

It’s kind of like a mix between Rick & Morty and Futurama, with a little more high level adventure story-telling.

I’d really love to watch it, if they’d actually stream the show anywhere. TBS has ad-laden early eps for another couple of days, if you can sign in with a TV provider (which cable-cutter choices like YoutubeTV apparently don’t count as), and it’s not anywhere else unless you wanna buy the season . . . which I kinda don’t wanna do on a whim?

Sorry, this has been your regularly scheduled In Which Armando Bitches About Every Single Media Property That Isn’t Available on One of the Big Three Streaming Networks (Netflix, Hulu, Amazon) For Some Fucking Goddamn Stupid Reason rant.

I watched a little of it and liked it. Too bad it’s not streaming, because I never check TV schedules to see what’s on.

Also the protag is kind of hard to understand sometimes. I need to watch it wearing headphones I think.

I never even heard of this!

if you can sign in with a TV provider 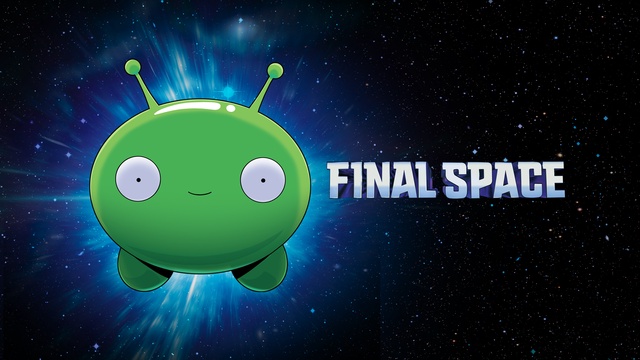 Final Space is a serialized intergalactic space saga about an astronaut named Gary and his adorable, planet-destroying friend, Mooncake. The series will follow their adventures as they embark on a quest to unlock the mystery of "Final Space," the...

Yes, but it’s only the first three eps. The remainder require subscription to VRV. Which isn’t Netflix, Hulu, or Amazon, so, you know, it may as well not exist from my absolutist perspective :)

Aaaaand, the TBS site starts at Episode 6. Well fuck! This is why I stopped watching The Expanse (before it moved to Amazon). If you miss a couple of weeks you’re screwed. There’s no way to go back to those “expired” episodes. Way to go attracting new viewers!

(I don’t watch TV much so I may be clueless.)

It’s on Netflix over here.

Season 2 should be airing sometime soon as well, very much looking forward to some cookies!