Nice one :) Although not sure what the 3rd tab would indicate.

Great fun this game. Lets you travel the world in 5 minutes ;)

haha the third tab was actually a google search for the location where the maintenance truck came from. Turns out it was actually a private company, but it had a location in the same city that the hotel had one of its branches, so that helped to narrow it down.

I got one of those my last game: a coral reef, staring at a sea turtle. Some random wandering found me a beach, and it turned out to be a resort island off the shore of Queensland.

Here is what I got: 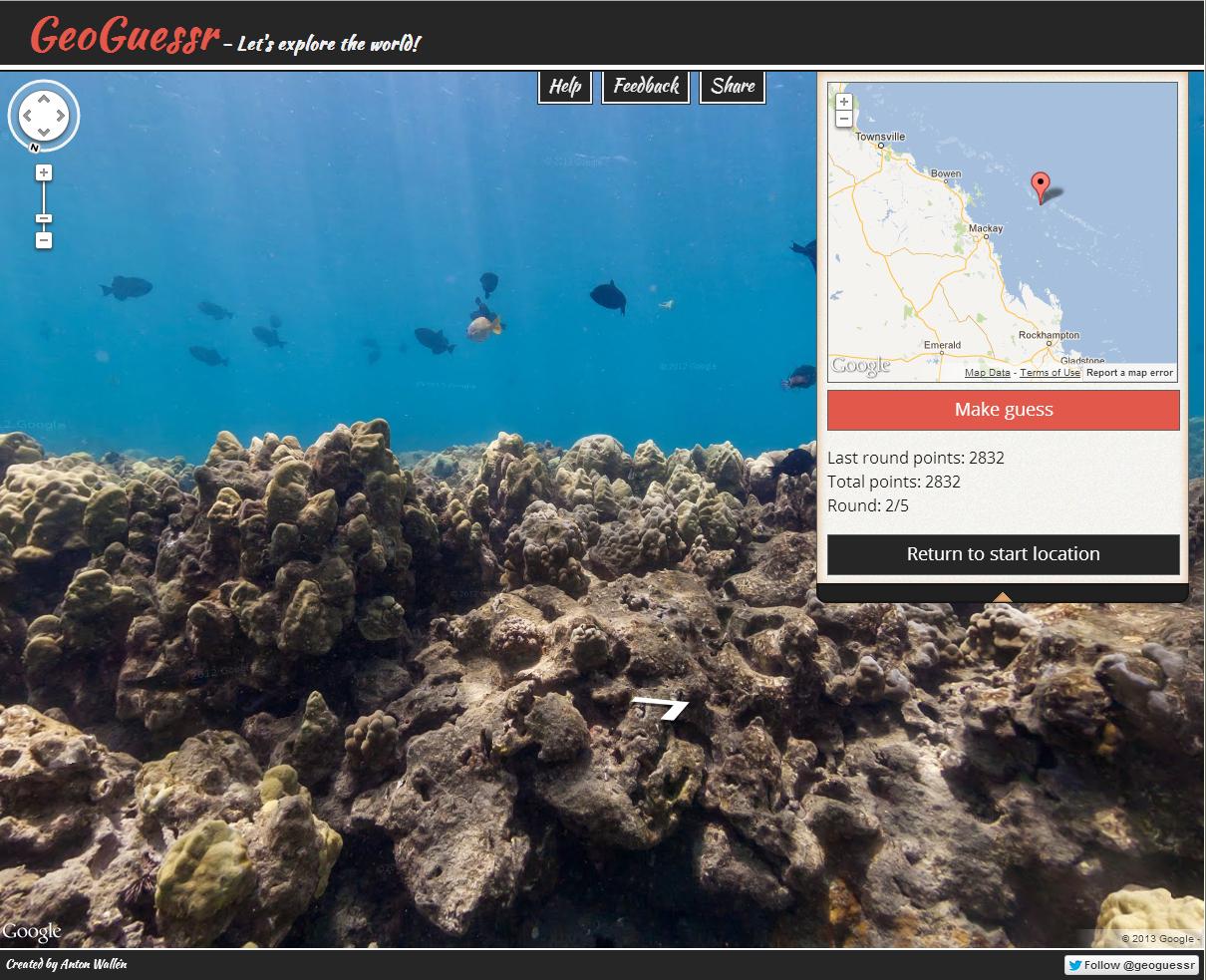 I just guessed the Great Barrier Reef, but I was off by about half an ocean.

My office friends and I have a league table going for the highest score without moving from the initial positions. It ranges from 10636 to 1800 points. Managing to only get 1800 points was more impressive than the 10,636 :)

do you let yourselves use google?

do you let yourselves use google?

Nope. You can zoom in on anything visible from the starting position, but no moving or googling. Sometimes you’ll start outside a sign with www.something.nz or shop like Banco de Brazil, but more often than not you’ll be stuck in the wilderness with no clues.

You have to start relying on things like type of trees, weather, what side of the road signs are on and the language on signs. Makes it quite fun, especially when you’re guess is off by half the planet.

Arise! I blew so many hours on this today. They have really upped the site, and now there is a Battle Royale mode where you can pick countries or distance and compete against 10 people. My eyes are burning from squinting at signs, but damned if I don’t have a lot more ability to discern SE Asian script and Cyrillic.

Has anyone tried City Guesser? It’s basically Geoguessr only with video clips instead of still images. There are a surprising number of clips there (though you will occasionally get repeats) but I wasted hours on it a few months back.

I don’t know how many people they have walking around taking random video, but my favorite clip was the guy making the video while walking down the Vegas strip, and it was like the only one where he was talking… and he was quite clearly drunk, hehe.

Anyway, if you’ve wasted enough hours on Geoguessr, try wasting a bunch on City Guesser! ;) (No account required, at least not yet.)

Well this is going to destroy my productivity.

I signed up for this, trying out the US game, and it is literally plopping me on country roads with trees and not much else. Seriously, there is not one helpful clue anywhere.

It would be very difficult for an algorithm to sort google street view images and only display ones that had some kind of clue in them. If you can’t see anything around you, might be a good idea to move around and explore till you find something!

First try 10k second try 17k. Even when I have nothing I have pretty good intuition … except about Japan. Always 0 on Japan.

I’ve played five games in a row, and have an almost perfect score. I blame that endless stretch of highway with no signficant markers. Was only 240 yards off, but it cost me a point. 4,999/5000.

Anyway, it seems the US game is heavily biased toward Florida. Almost every game has had a Florida spot. California? Zip.