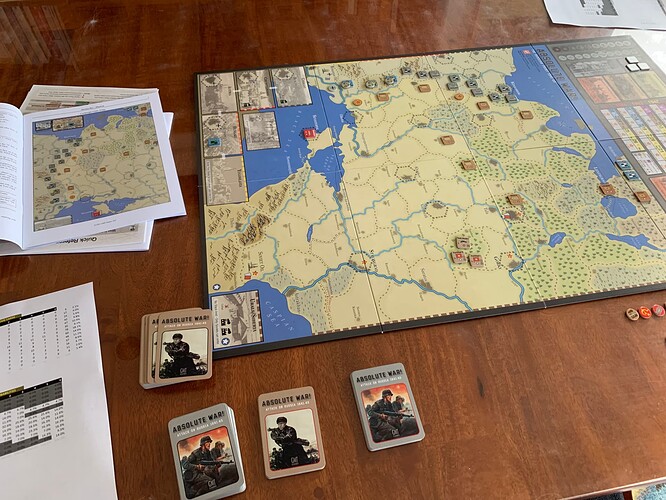 You may want to examine the CRT for this game, which is quite different for the Germans and Soviets, but the game never explains this. Instead, some guy had to calculate it. 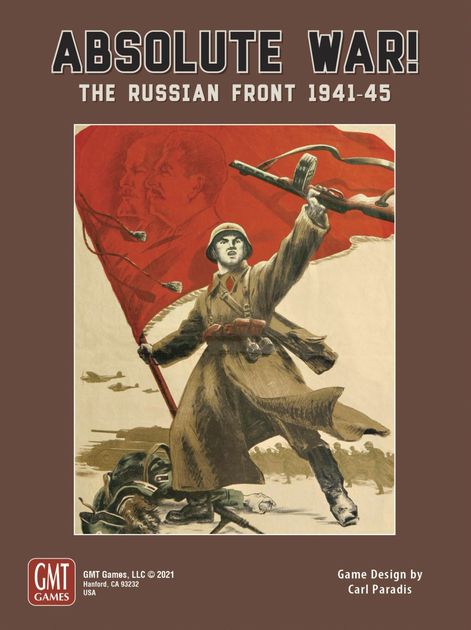 I’m very curious to hear how you find it plays. I’ve been thinking that it’s quite different from No Retreat, and that the two systems can stand well beside each other. But I’ve yet to get Absolute War to the table.

Color me also intrigued as to your take on Absolute War. I’ve only started a first go-round after a Thanksgiving solo affair with VPG’s The Barbarossa Campaign.

Tuppence from an ignorant dilettante: Less math than No Retreat, already enjoying the card-driven CRT (and your charts were a godsend, @Brooski). Delighted that Carl Paradis has kept the Red Army progression system in place, but trying to see how much the Soviets ape historical precedent and launch counter-attacks sans counter-blow markers or Ted Racier’s chits. Expect the Offensive cards to play this role, but we shall see.

Well my new local opponent was supposed to come over today so we could give Conflict of Heroes a go. His good lady tests positive on Tuesday and we have to call it off… boooo! (But the only sensible option)

It sounds like the change to area movement didn’t really throw things off. How does the geography feel. I imagine the way the armies move around the map feel right?

I was just going to put this out on the table but my copy of Assassin’s Creed showed up…and with that a campaign game, it might be on there awhile…kind of a relief as I have been dreading learning Ardennes.

It is my sad duty to announce that Christopher Dean, NWS Owner/Store Operator, passed away this last evening: Dec 1, 2021. He was an associate of mine for 20+ years, but more importantly he was

Damn…that sucks. I had emails back and forth with Mr. Dean over the years about a few of his games. Always nice and helpful…and his games were very unique. RIP.

I saw the news on Twitter yesterday. Sad. I didn’t know him, but I was just poking around on the site a couple of weeks ago.

It’s finicky for sure, largely because the AI is relatively complicated and then there are a bunch of exceptions to the basic rules based on the day of the campaign and keeping it all in your head can be a challenge. The player aids and the card layout etc are very good though and that definitely helps…

Terrible news. Always found him to be a good dude.

Oh no, he was such a good dude. RIP sir.

He was a good man. Rest in peace, Chris.

I think many people here recognize the name Philippe Thibaut

Btw, @Brooski, how was your game of Absolute War?

I just set up the game last night and started sorting through gameplay and rules. Not far enough along to have an opinion yet.

I really don’t know what to think of it. I think it solves some problems. I think it introduces other problems.

Interesting. I will try to make some progress this week. For whatever reason, I’ve found learning his games go like this…

No clue.
No clue.
WTF.
No clue.
Huh?
No clue.
click
Okay, everything makes sense.

I’m to about the WTF level now with Absolute War.