So this show was teased during the Super Bowl and looked like a lot of fun, especially for our girls as they’ve been really into Lego Friends lately. Did anyone catch the first episode last Wednesday? Runs at 9pm here in CA so a pretty terrible time for a show that a family could watch together. Luckily it’s on Hulu the next day so we were able to watch the pilot yesterday. The show is apparently the US version of a British show that first aired a few years ago.

Will Arnett is the host and we thought he did a great job. Ten teams of two face off each week in a building challenge, with the bottom two in danger of elimination. The judges are two Lego Masters and they both seemed to have impressive design resumes. The set looks pretty cool, with tons of Legos available and there’s even a display of Lego figures taking up a section of wall.

The initial challenge was to build a section of a massive theme park, creating your own rides and including at least some type of functional powered mechanics. The teams had 15 hours to complete the first challenge, which sure seemed like a long time. Apparently it’s not though, as these designs are pretty damn intricate and involved. I’m curious to learn if they actually build/design for 15 hours in a row or if it’s split into multiple days. The show seems to imply the former, as everyone is wearing the same clothes the entire episode, yet no one seems overly exhausted by working for such a long stretch.

So anyone else remember to watch?

I remembered to DVR, so we could watch later with the kids. We really enjoyed the show, I’m a big fan of Will Arnett from Arrested Development and my kids enjoyed seeing the voice of LEGO Batman.

The show itself was fun too, the contestants seemed like they were having a good time. I liked that they opted not to eliminate anyone after the first challenge, which seems on keeping with the happy-go-lucky vibe.

Personally, I can’t imagine all these people being on their feet building these complex sets in a single 15 hour stretch, but I guess it’s possible.

Yep recorded it for when I am not working next weekend.

What’d you think of the teams? My quick breakdown goes something like this, leaving out the ones that didn’t get much screentime. Some spoilers if you haven’t watched it but figured it’s not vital enough to spoiler tag.

I will admit that I’m partial to the beard bro’s, if only because they’re fellow Pacific Northwesterners and I liked the PNW theme of their project.

But I also really liked Manny and his dad, if only because they just seemed to be so happy to be there building together. And Harley and friend because it’s cool to see women getting into this. Same goes for the older couple too, though I don’t think they’re going to last long.

Recorded to watch with my son this week.

Almost forgot about it since I watch so little TV

In general, I’d give it a thumbs up…just.

It’s Fox, so they can’t help themselves with trying to mine drama out of pretty non-dramatic situations, but this one is not as OTT as most US reality shows. Still pretty OTT with the lights and the music and the silly set, but it could’ve been a lot worse. Hopefully they can find a little more playful tone as the series progresses.

The UK one is better, but this one will do if you can’t get hold of that one.

I would like to see the UK version. Don’t know if I can stand watching the average American in this type of show.

Who is Lego Batman / host of the show in the UK version?

Here's the lowdown on Melvin Odoom, the Lego Masters host who starred on...

MELVIN Odoom is a radio and TV pro who rocked the dancing world on Strictly. The 38-year-old is back hosting a competition to find the best Lego builder in the country – here’s all you …

Radio DJ/TV presenter-type…extremely likeable. I don’t know him, but I assume he’s known over there.

Melvin Odoom is a serious super villain name. If only he had some kind of medical degree.

I also DVR’d it and watched it this weekend with the kids. Really enjoyed it. It’s a shame it’s such a bog-standard reality-tv format (which I usually loathe), but Will Arnett was good, and they did some fun LEGO Movie-style CGI. And the builds are amazing.

I was also initially annoyed at the Beard Bros, but they made the best park, so bygones. The ones I’m really annoyed by are the ones I just think of as “the bros”. You know which ones I mean they won..

Also really like the Puerto Rican father and son, hope they get their act together in future episodes. And, I mean, can’t be too upset at the cosplaying Harley Quinn and her friend.

and they did some fun LEGO Movie-style CGI

I hope they do more of that in the future. Seems like they did quite a bit on the Bros park but I don’t remember much on the others. Did they blow their budget all at once? Very cool stuff but need more of it! 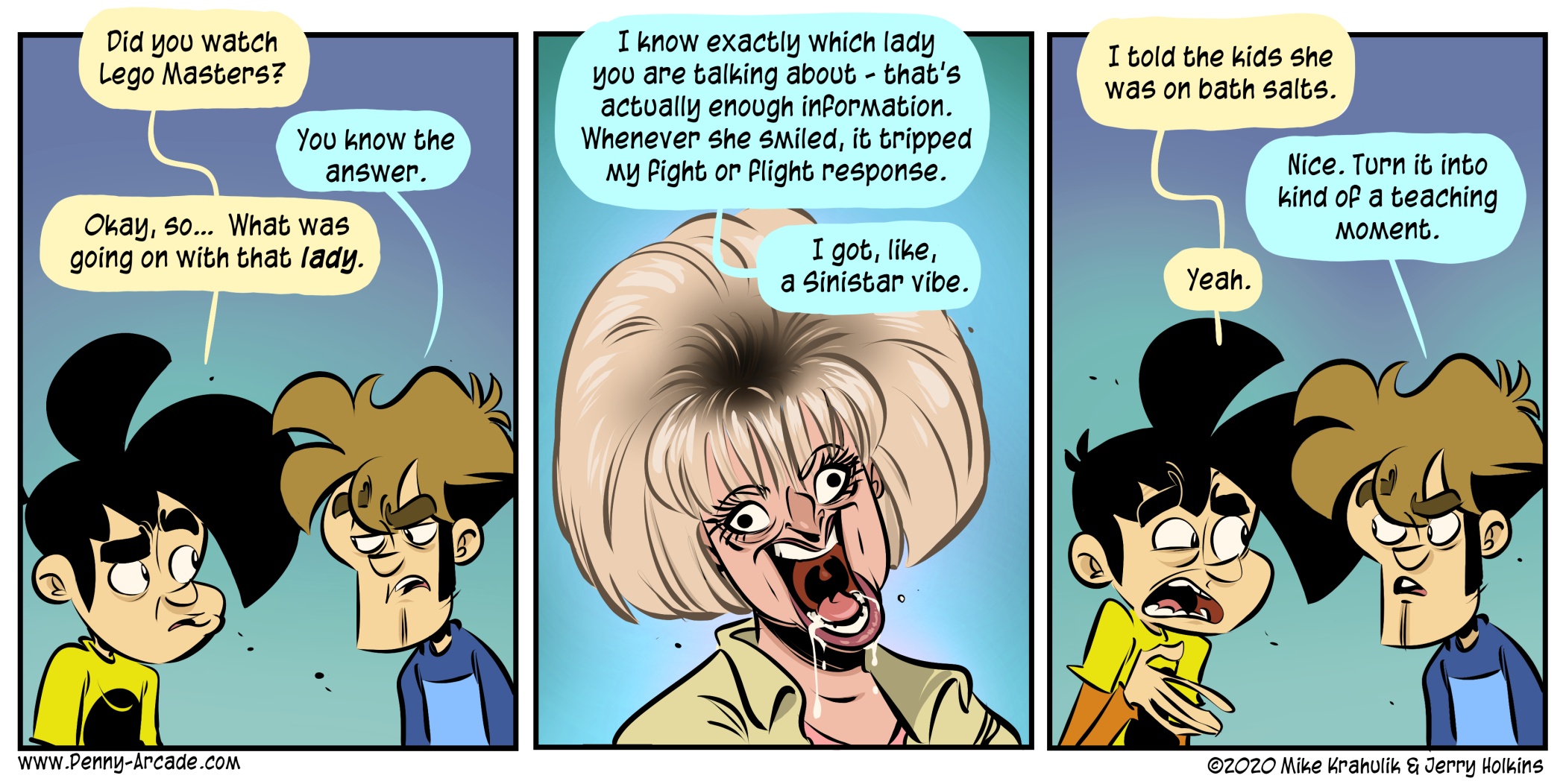 I am confident that if they keep trying one day they will be funny.

The australian version of this which was on last year was pretty good.

In that version, the contestants are robots made of out LEGO.

I am confident that if they keep trying one day they will be funny.

I am not so confident. Is the woman in the second panel Nancy Grace?