I bet I cheated too at their age.

I definitely pretty quickly had a good idea of where to stick my pencil in the chart to get the result I wanted.

I didn’t even use dice for combat, I just read the books as a choose your own adventure. “Oh, another combat? Looks like I win again, how about that?”

“Oh, another combat? Looks like I win again, how about that?”

I did this a lot when I was reading the book in study hall/at school, just to avoid anyone giving me strange looks when I’m constantly poking my book with a pencil. I’m sure at least a few folks thought it was already strange when I kept flipping around in the book and reading what must have looked like random pages.

I wouldn’t say I cheated but I certainly did this:

I ABSOLUTELY would always hold a finger on the last page I was on, mostly just to avoid the insta-death endings. I wouldn’t cheat using skills I didn’t have, but I absolutely would go back if I died.

and yeah, this too:

I definitely pretty quickly had a good idea of where to stick my pencil in the chart to get the result I wanted.

Man, these things were so great for long road trips.

I had a friend who would Ironman the whole series (up to Grandmaster at the time): He’d start at Book 1 and didn’t cheat or fudge a combat and if he died… he started over with Book 1. Props to him. 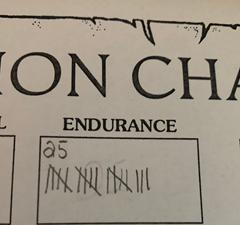 The problem with the combats is that it’s just a bunch of random results and then you either succeed and continue or you fail and are supposed to restart. There’s barely any interesting decisions and you won’t actually get anything by losing them, so they’re kind of not worth it.

The problem with the combats is that it’s just a bunch of random results and then you either succeed and continue or you fail and are supposed to restart.

Well, that’s kind of true, but I find what is interesting is so far most combat scenarios have been different/modified in some way, allowing for me to do something like “if you have a Shield, add 3 to the result” when an arrow was fired at me, or “this opponent is immune to mental damage, so you don’t get your +2 Combat Skill from Mindblast”. Once an opponent took only half-damage in the first two rounds of combat!

But by and large, the combats seem to heavily (so far, at least) favor the player. My lowest Combat Ratio so far has been +6 and I’m usually at +8/+9 and if I roll a 7 or higher I win the fight outright and take no damage in the meanwhile. Most of the above damage has been the result of choices I made/environmental things that happened. And also, I just found two herbs that can heal me! But I’m sure more dangerous opponents await…

There’s one point later on where if you have the thing from book 2, the fight is dramatically harder than the version if you don’t, to the point where I found it functionally unwinnable. Though that might have been an error in the math. Maybe the revised edition will change that.

There are gamebooks with genuinely tactically interesting combat systems. To the point where it’s really a significant focus. DestinyQuest being the main one I’m thinking of. Lone Wolf tries but… I dunno. It just isn’t there.

It just isn’t there.

I have a suspicion combat isn’t the crux of the experience - it seems to be a foil for the player, something to be avoided as an attrition cost over time. I think that’s totally okay, given the somewhat darker tone of the story being told. Steve Jackson’s Sorcery! felt like that, but with the spell system in that game combat felt rewarding in some fun ways Lone Wolf likely lacks. I’m so far fully in on the tale and the world building though, but I actually have had some really fun fist pump moments when I take down a powerful foe in a single round without a scratch.

I should be clear that my complaints about its combat apply to the vast majority of gamebooks and Lone Wolf remains head and shoulders above the run of the mill in terms of writing, world-building, and cool character mechanics outside of combat.

Yeah, the combat itself isn’t the highlight of the experience, I don’t think. And I never found a gamebook where it is. At its best, it’s a slow attritional process that forces you to make other decisions a certain way (like buying a healing potion instead of food or something). I remember there sometimes being fights that change if you don’t beat them in X rounds. It’s still just random, but at least there’s a dramatic shift in there. And it’s always fun to have a battle where one of your kai powers or some weapon you picked up lets you run roughshod over the poor foe.

Like I say, it’s definitely the big selling point of DestinyQuest. You have a whole suite of special/equipment abilities including dice manipulation etc, and the opponents have special abilities and such too. There’s narrative and such but it’s kind of structured like a sandbox where you can do different world map quests for rewards. Later on they even introduce the ability to run multiple characters for particularly big boss encounters and the like.

But that’s more of an exception than the rule.

Yeah, I’d never heard of DestinyQuest. Am I right that these were first released in 2012 or so? Wild.

Joe Dever released a different series of books called White Warlord/Black Baron that were picture-driven and primarily a multiplayer experience (though there was a single player game mixed in too). Basically a maze where you would call out a number corresponding to your position and if your opponent sees you they turn to a special page where you show up. 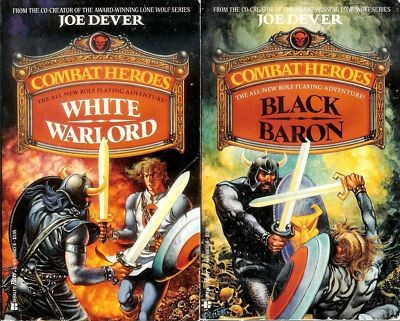 There was also a follow up, Scarlet Sorcerer/Emerald Enchanter. They were actually dogfighting games. The mages in question created magic flying machines to fight.

(What were those other head-to-head books called… Fighting Legends? I remember one with a skeleton. They were all named after the creature you played as, and they could be combined in any pairing.)

The big series was Lost Worlds. My dad’s current wife did some art for them decades ago (and got stiffed on the bill, so she passed when Wizards of the Coast wanted her to do some on an obscure little game they were making called Magic: The Gathering).

Hey! I had those White/Black books! Definitely like a turn-based, 1-on-1 computer deathmatch. I’d forgotten about those. Those are similar to the Ace of Aces-derivative Bounty Hunter. I’ve managed to hunt up 2 sets of those in recent years, so we can do 2-on-2 gunfights. There’s hooks in the books for surrounding buildings that were never published- I’ve always thought it’d be cool go go in and puzzle out the references and reverse-engineer those expansions. Ah, well, someday.

The absolute highlight of the original Bioware Neverwinter Nights was someone created a series of modules based on the Lone Wolf books, as best they could within the 3.5e framework. Unfortunately as I recall only the first two of a planned series of modules ever came out. But they were fun to play (god knows they were much better than the awful included campaign).

I may get these, as I only knew them by reputation. But game books always excite me.

Huh. Random coincidence- I just started listening to the audiobooks for Shannon Applecline’s “Designers and Dragons”, a well-researched retrospective of the RPG industry, following a bunch of companies started during each decade (70s, 80s, etc). I just got through the Games Workshop section, where there’s a digression into the Fighting Fantasy books, which includes some stuff about Dever and LW- apparently he worked at GW the time.

Thanks for this heads up, I got the first 5 books delivered.

I’m very curious why the original Gary Ghalk illustrations aren’t included. He seems to still be alive and surely could have been paid, if he has the rights. And if he doesn’t I would have preferred he be paid to draw new ones – his Twitter bio says “Will draw anything for money” – than whoever “Nerdgore” is. (Honestly I’m embarrassed to own something that says “Nerdgore” on it, but these books are still nice.)

Apparently I’m not the only one who had this idea, because he’s named as the illustrator for the upcoming Book 6.

Edit: wait, he’s also listed as the illustrator for 2-5! Nerdgore only did Book 1? OK, so like, why?

Edit 2: Oh HELL yeah, just opened one of the later books and got an eyeful of that classic Chalk. That’s kind of more powerful than the actual stories will be. Sigh. They’ll probably do an “ultra-definitive” edition of Book 1 with full Chalk someday.

Oh wow. All the illustrations in Book 1 are someone other than Gary Chalk?