As far as I’m aware it just puts you in the air near the place you’re supposed to “discover”. Sort of a quickplay option for some sightseeing.

I wanted to explore Melbourne since I’ve been watching the Australian Open. Man, what a beautiful city. That was a fun time. 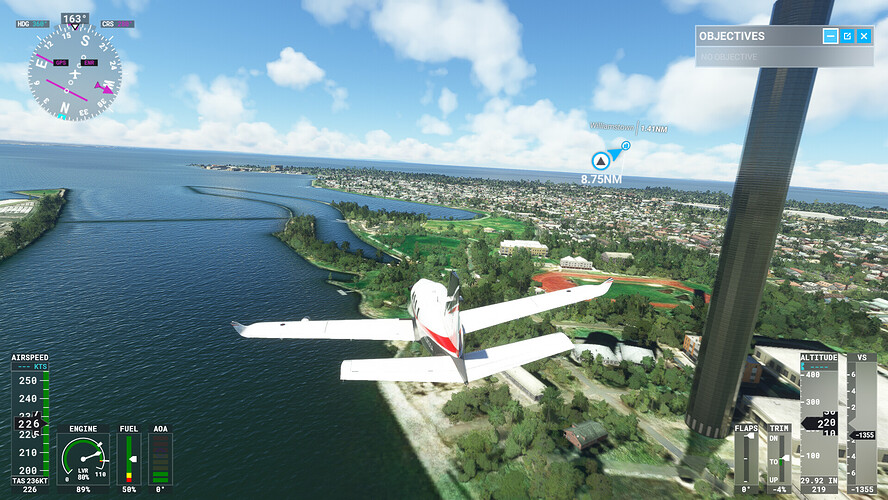 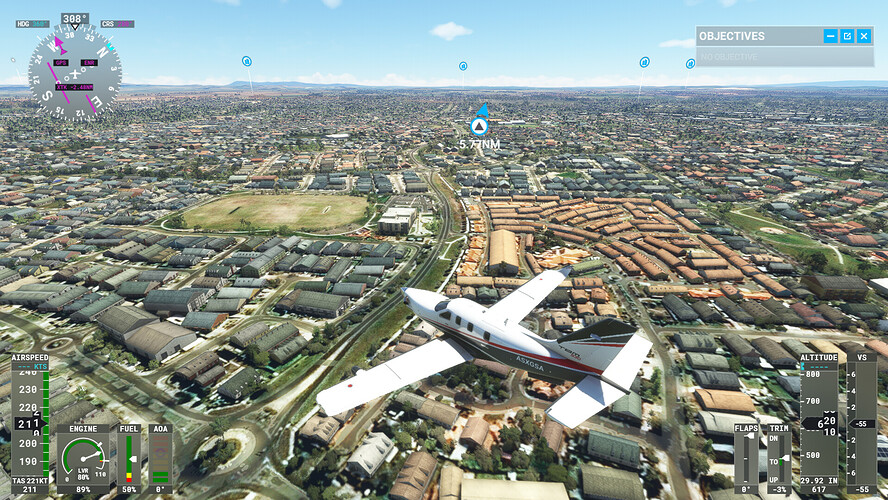 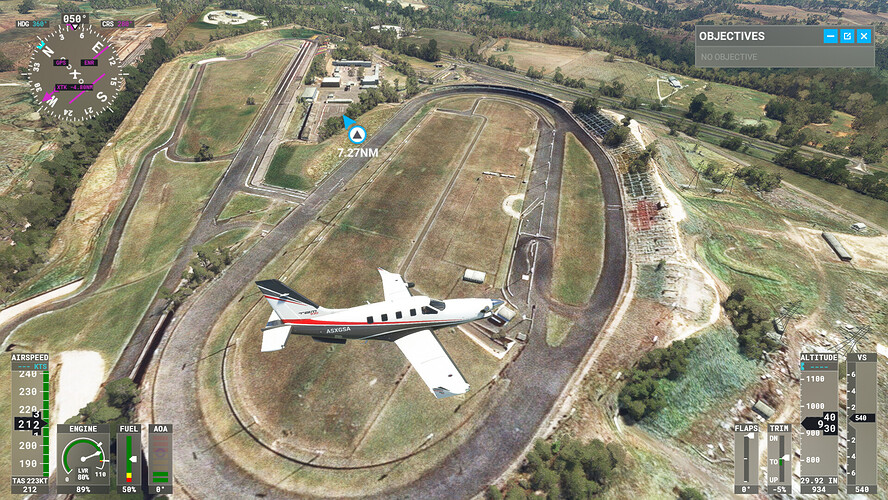 Pretty densely populated, like a concentrated suburbia, but also with lots of green spaces. 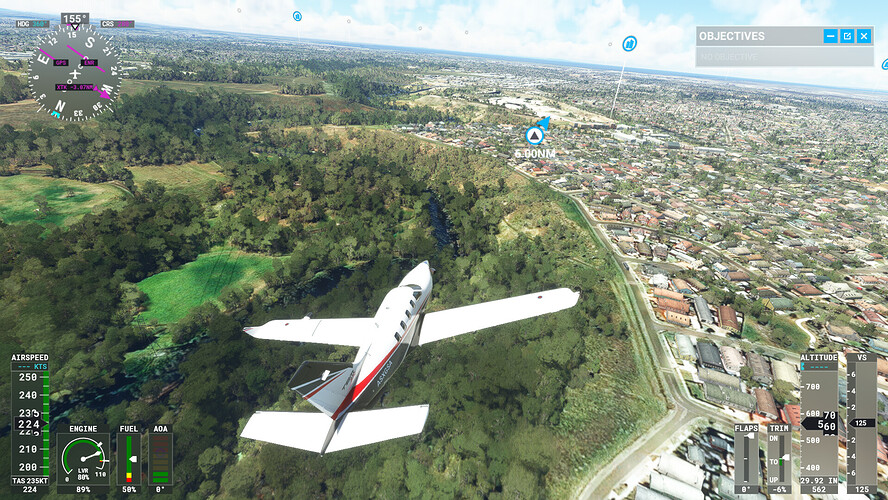 Decided to do a little night flight around NYC. Rather than fly out of the big three airports I figured I’d utilize the seaplane port next to LGA and give the Icon A5 a whirl. What a lovely plane for sightseeing. Slow, nice visibility, and very easy to fly.

Flew down the the east river.

Realized my graphics settings weren’t as high as they should be.

A very blade runner rendering of the bridges.

Circling back toward the city.

I fly up the Hudson a bit and back down before crossing over the west side into central park. I circle low inside the park for a bit considering if the Icon can land in Central Park Lake before thinking better of the idea. Totally going to try in daylight though.

I land back at LGA

Twin Otter is out!

Twin Otter is out! The de Havilland Canada DHC-6 Twin Otter, currently marketed as the Viking Air DHC-6 Twin Otter, is a Canadian 19-passenger STOL (Short Takeoff and Landing) utility aircraft developed by de Havilland Canada, which produced the aircraft from 1965 to 1988; Viking Air purchased the type certificate, then restarted production in 2008. The aircraft's fixed tricycle undercarriage, STOL capabilities, twin turboprop engines and high rate of climb have made it a successful commuter passenger airliner a...

This thing eh? It says they make ideal bush planes.

The Twin Otter is fantastic. Unlike the Kodiak, it deserves the hype!

I haven’t got much time in the Twin Otter yet but I really like what I’ve seen of it so far. Short field performance is godly.

My one issue with it is the transitions - or lack thereof - between different engine sounds. It’s pretty glaring and I’m surprised they didn’t fix it prior to release. They are working on it though.

Unlike the Kodiak, it deserves the hype!

This is probably the first negative comment I’ve seen about the Kodiak! I don’t have it myself but everyone I know who does absolutely raves about it. What don’t you like?

This is probably the first negative comment I’ve seen about the Kodiak! I don’t have it myself but everyone I know who does absolutely raves about it. What don’t you like?

The flight model lacks the stability you’d expect from the Kodak, given its high-wing design and the videos I’ve watched of it in action. The roll feels weird, and hand-flying it just requires too much correction.

The “fix” list of this “Definitely Wrong” mod is a good rundown! WIth this mod in place, it better fits what I’ve seen in the Missionary Pilot videos, and what I was expecting to encounter. 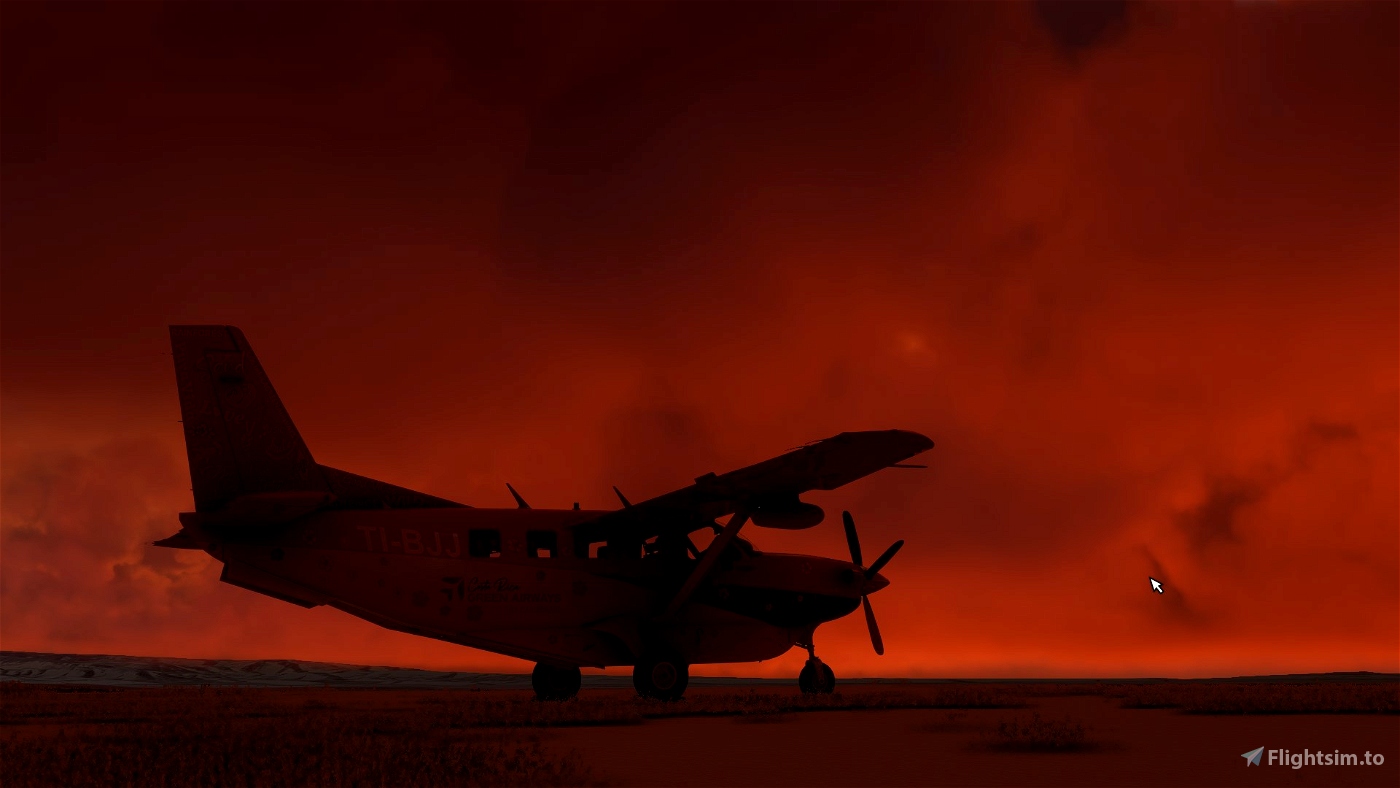 The title is just a preemptive sarcastic response to the comment trolls. :) I initially assumed it was going to add unrealistic performance or something, but it aims to bring the handling more in line with the real thing.

That’s fair. I’m not especially concerned about the flight models in general; never having flown a plane I’d never know the difference anyway. But, like you, I was concerned about the amount of hand flying required. I’m not a particular fan of GA at the best of times, and the really unstable ones just get on my tits. That’s why I’ve never bought the Kodiak despite all my friends shouting at me to do so.

I’m properly testing the Twin Otter tonight; I’m already on the second leg of a little Central American tour I hastily scribbled down earlier. I remain impressed aside from the sound issues noted earlier. It’s a very easy aircraft to fly, the GNS530 is competent (especially when modded), the autopilot behaves itself and it comes with a very generous number of variants, including a skydiving variant. Easily worth the 30-odd EUR I paid for it.

This thing eh? It says they make ideal bush planes.

It does a little bit of everything. Passenger or cargo carry, skis for snow takeoff/landing, floats for water takeoff/landing, large tires and the ability to do STOL on land, even non-runway terrain. It’s a workhorse. Combined with that, it’s also a common entry in all of the add-on career games that play with MSFS 2020. There are tons of really cool videos on YouTube about how they perform.

So reading the official forum, which is always a gripe-fest, the Twin Otther sound is apparently preliminary because they only just got the real recordings, and they do plan to tweak the audio.

Only flat-out bug I’ve seen is that the outbound VOR doesn’t work properly. I usually use GPS if the plane has it, so not a huge deal. I got my “learn VOR navigation” out of the way with the Commodore 64 version, where it was critical!.

I bought this from Marketplace because they said it’s coming to Xbox. First time I’ve had a marketplace purchase work without intervertion from Zendesk in months.

The outbound VOR does work inasmuch as it will fly the radial you select in NAV mode, however the CDI will be fully deflected which is obviously pretty disconcerting and makes hand flying an outbound radial next to impossible.

It’s a pretty glaring bug but I’m sure Aerosoft will address it. I have a feeling the aircraft was released slightly too early…

The metro area of Manilla was in the news yesterday on NPR, so while listening to a podcast today, I flew around Manilla. 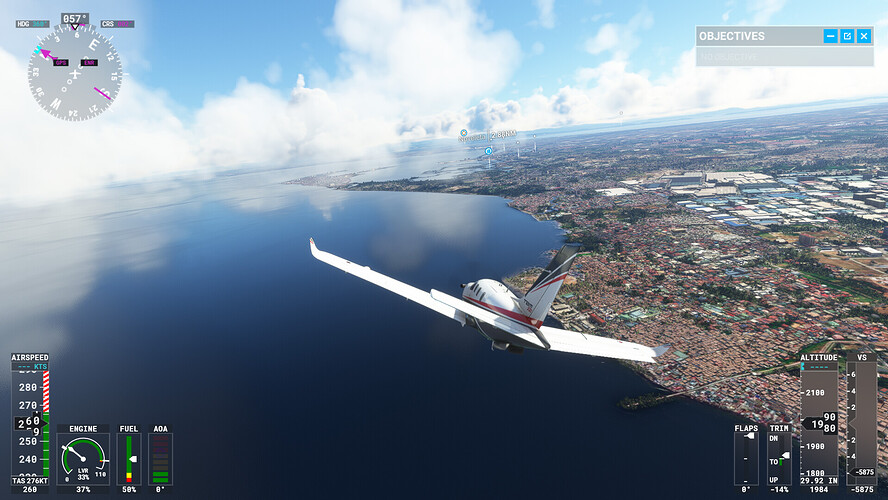 There’s just so much color everywhere! I didn’t even know what I should take a screenshot of to be indicative of the vibrancy of the colors of this city. 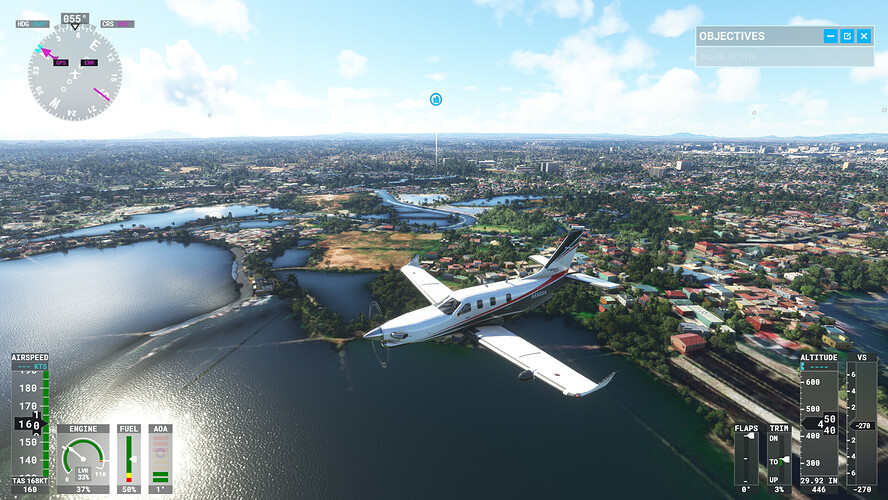 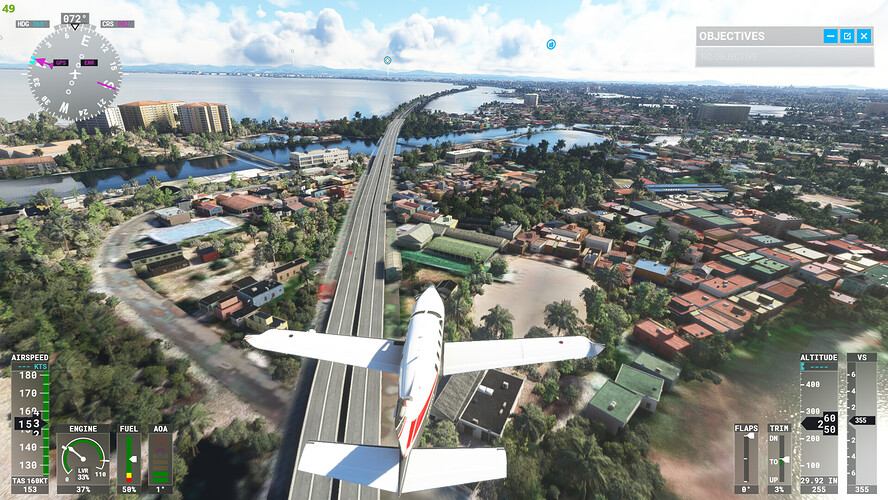 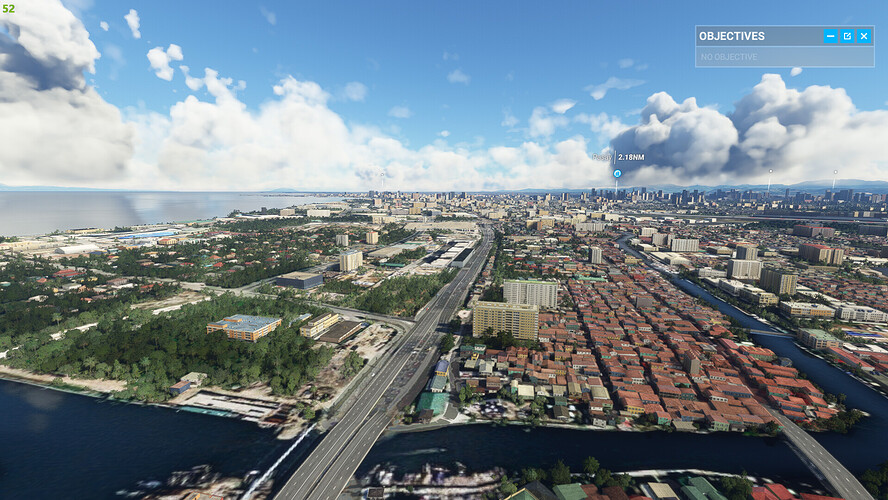 I always instinctively fly towards mountains when I see them in the distance. I should have known these hills would be just as crowded as the rest of the city. 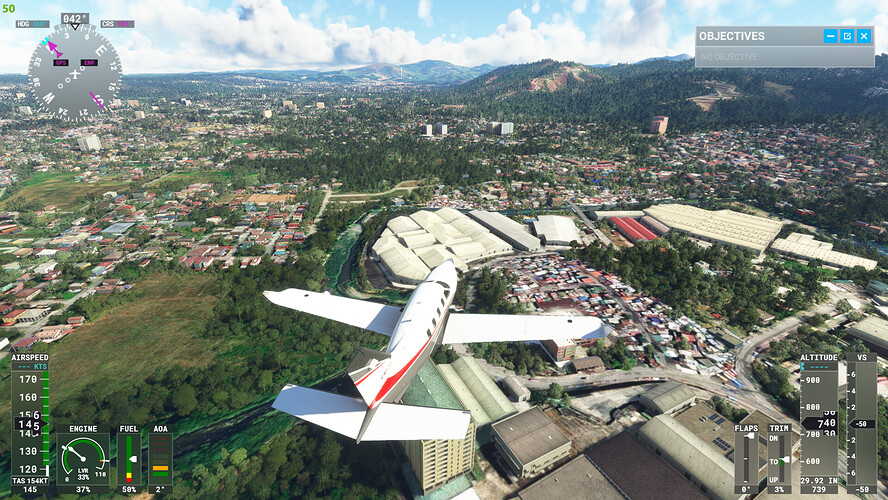 I didn’t really do it justice, it’s very cool from the air. I’m not sure what it is like to be in a city that crowded on the ground, but seeing it from the air is really neat. The hills around the city are gorgeous too, some great views there.

I sort of want to go back there as part of a Bush trip that’s a guided tour.

The metro area of Manilla was in the news yesterday on NPR, so while listening to a podcast today, I flew around Manilla

A lot bigger than I expected. I know the Philippines have some great natural sights too, might be worth a return trip!

So this thing takes Bing Maps and topological data etc and feeds it through an algorithm to generate the terrain. Could it use a different algorithm and assets to produce a different planet…?

I mean, yeah? If you fed it the data in the right format.

But we already have the Earth’s data with all its cities and mountains and lakes and rivers and islands. To make one for a fictional planet would likely take a lot of work, I would think. So I’m not sure if this would be a good method of generating a fictional planet.

No, it would be a terrible method. It’s designed for the needs of flight simulation, on Earth. So a lot of work has gone in to making it work with the data that exists for Earth, and with the limitations of the Blackshark algorithm, that have basically no relevance on other worlds which don’t have the same datasets, or landscape features, or buildings.