The lesser number of cards

But there aren’t a lesser number of cards. I can’t recall where I saw the numbers, but while StS has more cards per hero than MT does per clan, you wind up with similar numbers because you play two clans. And you have ten deck combinations, with two champion choices each, and subtypes of those.

I just had an amazing experience.

I mentioned this run above. It was a struggle the whole way trying to figure out how to make it work. It just never seemed to take off like I wanted and I didn’t think I’d get past Fel, but I kept getting just enough to push ahead. I never seemed to find the shop upgrades or artifacts I wanted most and just kept pushing to make the best use of what options I had. As you can see, I escaped with a rather narrow victory and it felt amazing. 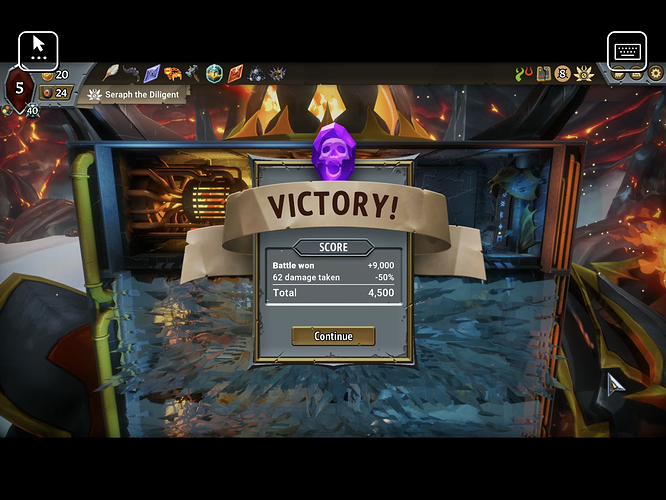 Grats on a narrow win.

Re: Card count. Yes it’s 2 heroes but both are drawing from a smaller pool 200+ for 5 heroes vs 400+ for 4 heroes. So the randomness is much reduced. Additionally, the cards contain both units and spells which also cycle the cards faster when units are played. All these combine to make the decks a lot tighter imo.

Yeah, since units leave your deck when played and there are a lot of consume powers I think decks are more consistent and predictable than in Slay the Spire since once you’ve gone through it once a third of your cards are out.

It reminds me of the card game Codex, which is a deckbuilder mixed with some MtG-like concepts. Even though you’re building the deck up, it’s super predictable because most cards only return to your deck after they’ve died, so your deck is often really small.

It also feels like there’s less options for extra card draw (at least in the factions and cards I’ve seen). Which makes sense because I think it’s less necessary here due to that core design. There’s still RNG, but it feels like mitigating it isn’t as important.

At least two of the clans have significant means of recovering units (umbra and the was guys). As for draw, there aren’t a ton of cards I’ve seen that draw immediately, but a decent number that increase your draw the following turn.

It reminds me of the card game Codex, which is a deckbuilder mixed with some MtG-like concepts. Even though you’re building the deck up, it’s super predictable because most cards only return to your deck after they’ve died, so your deck is often really small.

Thanks for this comparison. I was trying to think about why I liked the feel of Monster Train so much, and I think it is because it reminds me of Codex, which I adore.

I just noticed something when I purchased it. I got a 20% discount. But when I went back to the store page, it shows a 10% discount. That is quite strange.

10% launch discount. 10% Slay the Spire owner discount - only on the first copy.

10% launch discount. 10% Slay the Spire owner discount - only on the first copy.

Sat down at 9.30pm to have a quick go and didn’t stop until 2am.
This is really really good! The “protect the pyre” concept reminds me of Legend of the Keepers a little.

Only a Tabletopia version. Codex is clever. If you ever want to give it a go, let me know.

Just has my first run with Stygian Guard. I did great until Seraph. Didn’t set up well enough and tried to be cute. Didn’t protect Tethys well enough and got no spell weakness on the boss. It was easily rectified. Just goes to show how quickly a run can fall apart. All part of the learning experience.

The release definitely plays better compared to the demo. I see that they tweaked both the cards and the progression for the better!

The demo is apparently months out of date. It was still representative of how the game plays, so I guess they figured their time was better spent on the actual release.

I’m really liking the unlocking of the cards. Obtaining golden card borders are really fun also! Turning to be a serious challenger to StS imo!

Love the weaken ability of the Stygian… it’s an awesome boss killer because of the relentless feature of boss.

Oh dang it. I kick a Slay the Spire habit, Ascension 17-18 ish and 100s of hours played, and thanks to this thread, 20% discount and this game is freaking amazing I get sucked into this?!

Anyone up for expanding the range of Steam friends to uh, compete against in a very friendly way? I am friend code 66985455 (Lykurgos)

Sorry? FWIW, I have been getting my ad handed to me repeatedly since unlocking Stygian Guard. Made it to Seraph once in the last 7-8 runs, but couldn’t get the Card I needed Into my hands, despite having two copies with permafrost. Everything else has been, well, a Train wreck. And this is just Covenant 2

(I’m https://steamcommunity.com/id/jesnell/ in case anyone wants some leaderboard action.)

The random starting cards from covenant 1 onward bother me less than I thought. Sure, there’s time when it means there’s unplayable garbage in your deck. But the game is very generous with deck culling capabilities, and it really doesn’t matter whether you’re culling out a card that doesn’t work all or that’s merely underpowered. And it’s pretty hard to lose the game, or even get into a bad situation, before you’ve had time to fix the deck. But it does at least force you into thinking about why some of these cards exist.

(E.g. I was forced to play with the card that gives a unit 3 lifesteal in exchange for 2 emberdrain. Which seems like trash; three lifesteal does not seem worth losing three energy, even with a delay. And unlike the other emberdrain cards I’d seen, you can’t arrange to have the unit get killed after you gained the benefit. The beneft from lifesteal is delayed kind of by definition. But it turned out to be a killer card for the boss rush.)

This is an easy recommendation for a friend who gave up on StS due to thinking that act 1 in StS is a pointless waste of time, and would just like to draft cards to start in act 2.

But I’m still not convinced by the upgrade system. There’s basically no tension about early/mid/late game tradeoffs in the deck building, since basically everything could be upgraded to something that’s viable in endgame. There’s also no need to delay taking cards or delay upgrades, since as far as I can tell the loot tables and shop contents are the same at every level. Just go with endgame cards right from the start.

There’s basically no tension about early/mid/late game tradeoffs in the deck building, since basically everything could be upgraded to something that’s viable in endgame.

See, I like the idea that if you do it right and build around it almost anything work. I want the starting deck/relic/champion to give me a push in a direction and see if I can make it work. The tension, for me, ifs in bringing the build together in time, and having it be strong enough and efficient enough to actually work.

Maybe you can teach me your Stygian ways. I’m not good with them. Took me 7-8 tries to beat covenant 2 with a combo of Stygian and Awoken. Win with a sting deck.

Unlocked Umbra during that run, so something new to play with.

I have some success using frozen and spell weakness of the Stygian. The frozen is very useful long drawn out relentless fight the boss while the spell weakness is very powerful against the boss if you can stack it up to unleash a high damage card.