Reading in an ebook app—thanks for making a download available. A great pleasure to read so far. I, too, immediately recognized your name from the old SMAC/X section of Apolyton and that amazing guide. It improved my play style immediately. :)

This is a great read - thanks for this!

Maybe the front piece is a little incongruous? Something like a David Roberts artwork would fit the bill better.

Some impressions and errata:

As this is a draft, I’m going to skip any formatting comments except to say that the title font immediately makes me think of 16th century England, which is a bit jarring.

Having said earlier that Old World is not other 4x games […] the particulars of OW gameplay make the two games very different.

Which two games? I mean it’s pretty obvious but I’m guessing this has survived from an earlier draft.

every turn it takes to complete the terrain improvement in question, your worker will auto-deduct an order from future turns

You’re the King, yes, but your rule is not absolute, or absolutely certain.

to supplement you’re your own, native troops

more oriented toward defense that most other UUs.

Good read as far as the end of the nations list. Not much I didn’t know in terms of how the game works, but some of your strategic ideas have provided food for thought. I’ll read more later (and provide more errata if these are helpful) but for now it’s time to go and play some more Old World.

Thank you, everyone, for the kind words and the feedback thus far - this is perfect and will absolutely help make the finished book that much better!
I’ve got a Twitch stream to prepare for (ongoing video strategy guide episode), and then, I’ll make the changes and I’ve got a few new additions on deck for today (a section on Diplomacy (using it as both shield and sword) and some more tactical stuff for the combat section.
Updates to follow by this evening!

re: The Artwork - no worries - most of the stuff you see are just placeholders. The team artist will no doubt provide better artwork - I’m just using simple screenshots, paint, and my Deposit Photos account for the cover image.

Unlike Rho21, I am just a dabbler in the game, and the introduction part helped me finally get how orders worked, amongst other stuff that escaped me, back when tutorial message were elusive little things running away once you let them go ;D
I’m really enjoying it — as the super mega noob I am.

@Left_Empty Thank you, and I totally get what you mean - if you’d like to see something live, I’m start the Twitch stream in just a few and will be uploading to YouTube later as part of the permanent archive!

Might want to edit the OP to put the link right at the top.

Might want to edit the OP to put the link right at the top.

I’ve run through the guide once (so far) and am looking forward to applying the strategies in a game soon, thank you!

Hello and thank you again, everyone! Changes in place and the new sections mentioned earlier (diplomacy and more on tactical stuff/combat). For reasons I’m not quite clear on, when I removed the parchment background, it COMPLETELY hosed the formatting, so…I’ve left it in for now (those two things shouldn’t have anything to do with each other, so…dunno what’s up there but I’ll mess with it more later).

This looks great! I have it open on my iPad, but when I try to download to the iPad, I can’t tell if or where it’s been downloaded. Has anyone successfully downloaded it to an iPad (to read in the iBooks app)?

Yes, I did - after it’s downloaded, there’s a download queue icon at the top of Safari, the pdf file was in the drop down when you click that, and then you can open in iBooks. 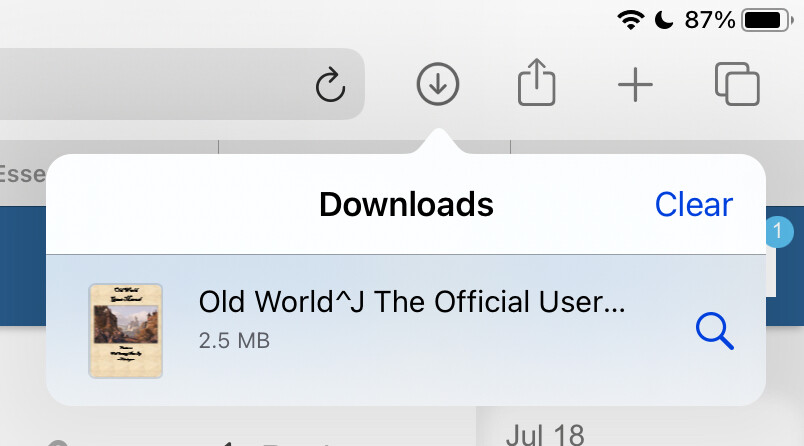 You’re a genius! I didn’t know how to do that. It looks great in iBooks! Thanks for your help.

Wait…you can BUY additional orders? That kind of defeats the purpose of the system, doesn’t it?

They’re expensive at 100 training each, so you can’t buy all that many, and buying them means not promoting your units as much or not building as many.
Late in the game you can enact a law to let you buy (and sell) orders with money. Powerful if you have a big treasury (though unit fatigue remains pretty limiting). Many of the endgame toys are pretty powerful though. For instance the law that lets you store up to 100 orders between turns could let you stock up just before a major war.

Wait…you can BUY additional orders? That kind of defeats the purpose of the system, doesn’t it?

I did indeed, many moons ago…have only written a few guides since (one for State of Decay and another for XCom2, on Steam), but when Soren and the team got in touch, well…I love the game, so couldn’t say no. :)

I’ll see what I can do re: convincing Master Soren to write a bit to accompany the book - an excellent idea!

I remember your SMAC guide it was good. I should check out the XCom2 guides).

Here is my comments on draft 1.0

First, overall it’s excellent, pretty much exactly would I’d be looking for as experienced 4x players. I agree with the suggestion to be careful about things like using acronyms like UU. I’m not actually sure if Old World is a good game for newbies to the genre to play.

Then note that heirs, advisors get 1/2 and your first 4 heirs and courtiers get 1/3 of the totals.

3, Finally I think section on ambition and victory conditions would helpful. It explain how victory points are generated, how the double victory point early victory works. Then a strategy guide on picking ambitions would be great. I know that some people are trying to tank Tom’s AAR game, but let’s just say overall I’m not overwhelmed by the wisdom of the crowd in picking ambitions.

I consider myself, a pretty good OW player (Glorious/Magnificent) and I agree with at least 90% of your strategy hints, and suggestion how to play various nations.

An excellent manual which conveys much useful info (even for quite experienced OW players like myself) and particularly of course for new players. The manual rightly acknowledges that many will be coming from Civ experience and helps them get round the differences. Equally important, the manual is clearly written with enthusiasm for the game (not always the case with game manuals!) and this enthuses the reader too. It’s a bit rough round the edges at times (not surprising as it seems to have been written with commendable speed since launch) but Strollen’s good suggestions above and no doubt others will make it even better than it is. Great job!

Looks like it’s been a busy evening, and thank you once again, for the great feedback! Will get busy incorporating these and have another update to the file by end of day! :)
And @Strollen, let me know what you think of the XCom2 stuff! Two separate guides there, and I sure had a blast putting them together!