I disagree entirely with Cole Wehrle (yikes) that it’s a, “story everyone is already taught in high school”. That applies to the Holocaust, yes, but the Congo? No.

I thought what he meant by that was the perspective Scramble for Africa has on African colonization is a problematic one in line with the one we’re taught in school (high-level, not acknowledging the tragedies, focused on Europeans). If you’re going to tackle a subject like that, you should bring a different perspective than your audience is expected to have. I’m not sure I agree with it, but it makes some sense.

But I’m not sure that’s what he meant because the later comment about it needing some sort of subversion or payoff seems really wrong. There’s a lot I learned about the Vietnam war playing Fire in the Lake which I think mostly isn’t subversive.

I think this conversation will get me to pick up King Leopold’s Ghost. Never heard of it, looks interesting.

I would never in my wildest dreams have imagined that people would not be taught about the Holocaust , holy shit. Maybe they just didn’t pay attention? xD

It’s always possible that student recollections are at variance with reality :). Over the years, though, the consistency of responses indicates to me that there is at least some cause for worry. To be fair, it’s not so much that students don’t get any exposure to some subjects (though that can happen), it’s that the exposure they get is often superficial and even at times flat-out misleading or criminally disingenuous.

I think this conversation will get me to pick up King Leopold’s Ghost . Never heard of it, looks interesting.

It is. Leopold was a class-A bastard. He makes other imperialists look like Albert Schweitzer sometimes.

Theres nothing bad with slavery in a videogame, perse, is pixels, not real people.

Theres nothing bad with slavery in a videogame, perse, is pixels, not real people

Blanket statements aren’t super useful in that kind of discussion.

They are games. You are not enslaving people. But games can definitely touch on sensitive subjects. Boardgaming is a maturing hobby. How it does that or not matters.

I once roleplayed being a New York Times reporter, and I felt so dirty and reprehensible.

Is this about that type of thing?

I once roleplayed being a New York Times reporter, and I felt so dirty and reprehensible.

Did you do any actual research or did you just google for Boardgame threads and search Twitter?

The Gray Lady does not stoop to such things as “Twitter” or “research.” 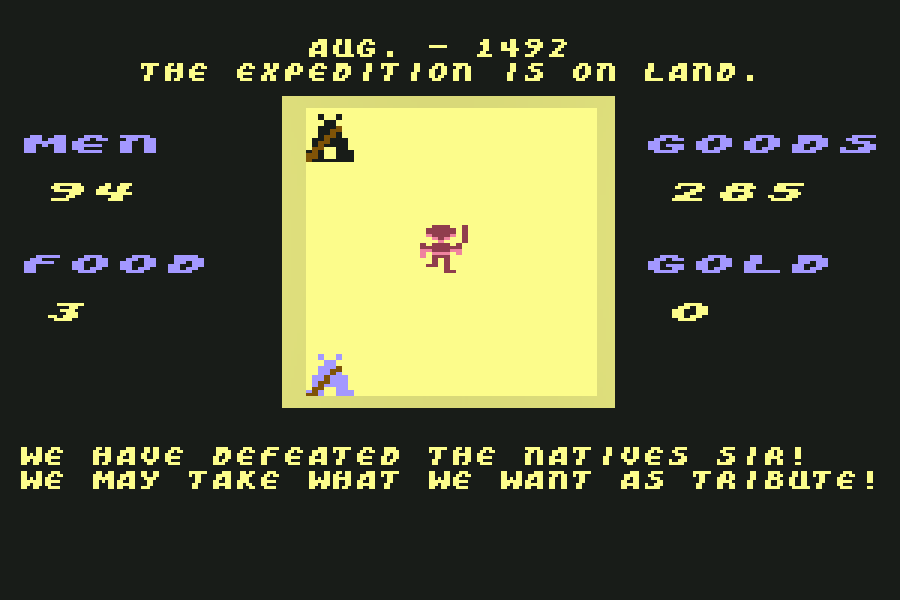 There’s a reason most WWII games do not deal with the extraordinary waste of resources resulting from the Third Reich’s pursuit of its racial agendas, with the death camps operating and the trains running full of murder victims up to the very end of the war. You’re never really given a dialog box with choices like “Spend X build points to transport 10,000 more Jews to Treblinka.” I’m pretty sure no one would want that. Things like slavery or imperialism or even collateral damage from bombings, etc. are a lot more ambiguous though, for different reasons. You can’t really simulate certain parts of history without including some of those things, yet I think there is a legitimate discomfort with in effect “monetizing” such actions within a game.

What if you put it in an imaginary post-war United States? Just play Joseph Miranda’s SS Amerika. You can do all that stuff.

What if you put it in an imaginary post-war United States? Just play Joseph Miranda’s SS Amerika . You can do all that stuff.

Well, by "can’t " I mean you can’t do it without blowback, and really, how many people even know of the existence of SS Amerika? And being hypothetical certainly helps.

I mean you can’t do it without blowback, and really, how many people even know of the existence of SS Amerika?

Well, how many people know of, say, some of Ecklund’s more esoteric titles, or even Scramble for Africa, in the big picture. The general public didn’t even know about the Scramble BGG-dust up until this guy regurgitated BGG threads.

SS Amerika did cause some consternation, based on Name and cover art when it was released. Of course that was pre-SM.

I guess the real question, as it is in all of these cases, is what is gained/lost by the inclusion/non-inclusion of the problematic content. Haven’t played either Scramble or SS Amerika. I have no idea whether the stuff mentioned fits or not, etc.

EUIV has them, and I feel like it’s usually a good option to get rid of it, and there are consequences later in the game to keep them… been awhile since I played EU but i do remember a strong incentive to change that trade.

Yeah, in EUIV any player doing African colonization will usually participate in it (passively), because the game doesn’t give you a choice in what a province produces for export.

Later on, you get choices to accept or ignore papal bulls against slavery, to cooperate or not with local slave traders, and finally to abandon the slave trade altogether, once your development (and leadership) is high enough.

It’s an interesting take. The game doesn’t valorize slavery or the slave trade; in effect, it says “This happened, and countries that colonized Africa typically took part in it, and so do you.” The only ways I can think of not to go along with it is if you 1) ignore Africa altogether (which is a viable option for a lot of countries) or 2) abandon a province as soon as it gets set to produce slaves. But the way the game plays out for England, Portugal, Castile, etc., the game logic will usually make you complicit, at least for a time.

Sid Meier’s Colonization (1992) omits the slave trade altogether, but it does include some heartbreaking scenes involving the native inhabitants and “Indian Converts”—basically reflecting the encomienda system (which EUIV also incorporates as a passive benefit for New World colonials). You can play Col such that you don’t follow that path, though.

Scramble or SS Amerika. I have no idea whether the stuff mentioned fits or not, etc.

Scramble was killed in the cradle due to SM/BGG reactions by some users, so we’ll never know. It sure didn’t look like it was going to deal with problematic content in a realistic/thoughtful way based upon the examples.

SS Amerika, as an example did. It forces the invading Axis player to decide on occupation policies (Slave Labor Policies say, in Atlanta versus a Nationalities Policy…plunder the city for resources and increasing US Will/Guerrilla activity or arm the revanchist Confederate die-hards the Axis Player could cultivate but lose the resources gained in a brutal occupation). It’s essentially an allegory for the War in the East with all the bad stuff included, but st in a hypothetical invasion of North America. A very interesting way to explore (and expose) the bad stuff in a game. The realism and thoughtful, historical treatment everyone says they want in games when these Historical Boardgame debates arise is there, but since it occurs in an alternate reality, it blunts the real offense nationalities and groups may feel in a historical treatment.

The game is flawed in other ways. Good but vanilla (odds, move-fight-mech move) combat system but it is a 4-mapper and the 4-mapper includes almost all of Hudson Bay…weirdly. And for the perceived provocativeness of the cover art, it is really bad cover art.

Theres nothing bad with slavery in a videogame, perse, is pixels, not real people

Blanket statements aren’t super useful in that kind of discussion.

Then the thing wrong with it is the pamphlet aspect of it.

I just finished a game where I was murdering bandits in the wastelands. And theres where no morality to it, because is not the real world, is fiction.

Anyway, you can write a horrible pamphlet, and your intention is the oposite. A Modest Proposal For preventing the Children of Poor People From being a Burthen to Their Parents or Country, and For making them Beneficial to the Publick, commonly referred to as A Modest Proposal, is a Juvenalian satirical essay written and published anonymously by Jonathan Swift in 1729. The essay suggests that the impoverished Irish might ease their economic troubles by selling their children as food for rich gentlemen and ladies. This satirical hyperbole mocked heartless attitudes towar...

Thanks for the info. Certainly, controversial material, even stuff that makes us feel uncomfortable, has its place in historical what-ifs.

One thing i’m going to say is, that like much of writing, the criticisms in the article are much much stronger if they refer to specific games and specific things in specific games, rather than vague generalizations.

For example, let me explain a Phil Eklund “classic” Pax Emancipation. In his historical view, the greatest places to potentially emancipate slaves(an incredibly broad term in Eklund’s usage but also oddly specific) were China, Japan, India, and Turkey. The actual loci of emancipation movements in the 1800s, the US, Caribbean, and Brazil, are almost tertiary. It is a massive historical non sequitur, and essentially comes from the idea that colonialism was a matter of liberating indigenous people from the ‘slavery’ of local masters.

It also has a bizarre notion that State Power, religious fervor, and merchantile interests were in competition to ‘free’ people faster, but that I can at least see as a concession to making a game out of this. Everything is so far off the mark that it only makes sense after you read Eklund’s fever dream about how the EIC was a liberatory force in India and that the Opium Wars were about freeing the Chinese peasantry rather than freeing silver from the Imperial Treasury.

These are specific criticisms, though, that require a grounding in history and some research, and it takes a little bit more time to compose in article form.

Easy to talk about the greatness of a cheap ploy like Train than to try to engage a complex game’s historical theses.

These are specific criticisms, though, that require a grounding in history and some research, and it takes a little bit more time to compose in article form.

Agree, and these in depth, historically grounded discussions cannot occur if over time, It becomes habit to never let games get developed due to vague surface reactions by the uninformed to the topic.