Spring has sprung, and that means a new version of Out of the Park Baseball is hitting the storefronts. This year it’s version 22, launching on March 26. New features in this version include:

It seems like this version offers… what’s that word I’m thinking of… oh yeah, MORE!

List price is $40. You can preorder the game for 10% off on their website here or buy it during launch week on Steam (no Steam preorders though). 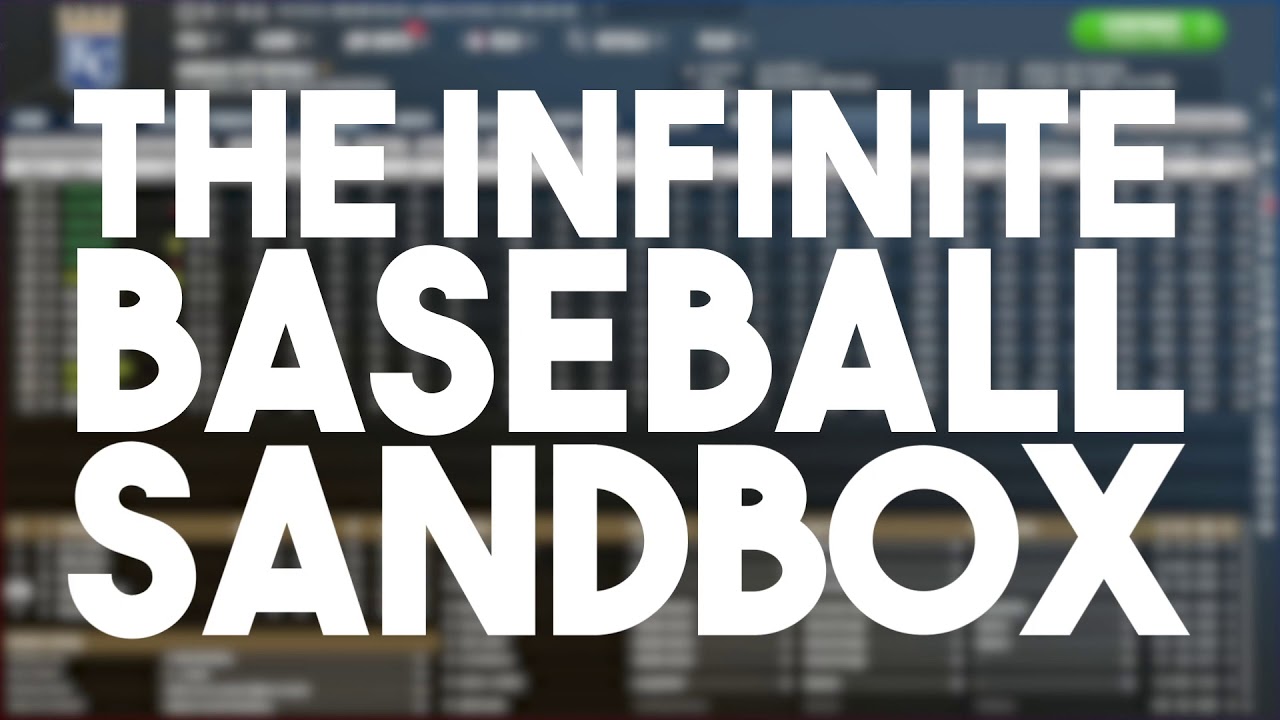 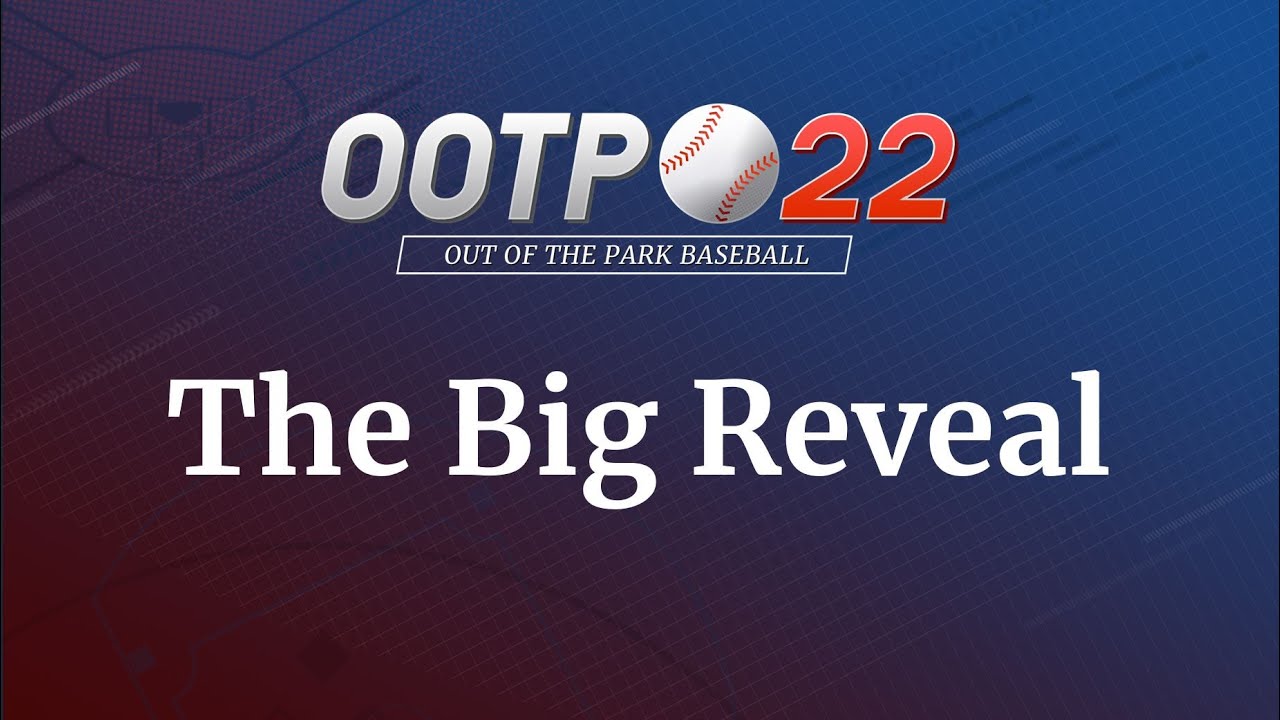 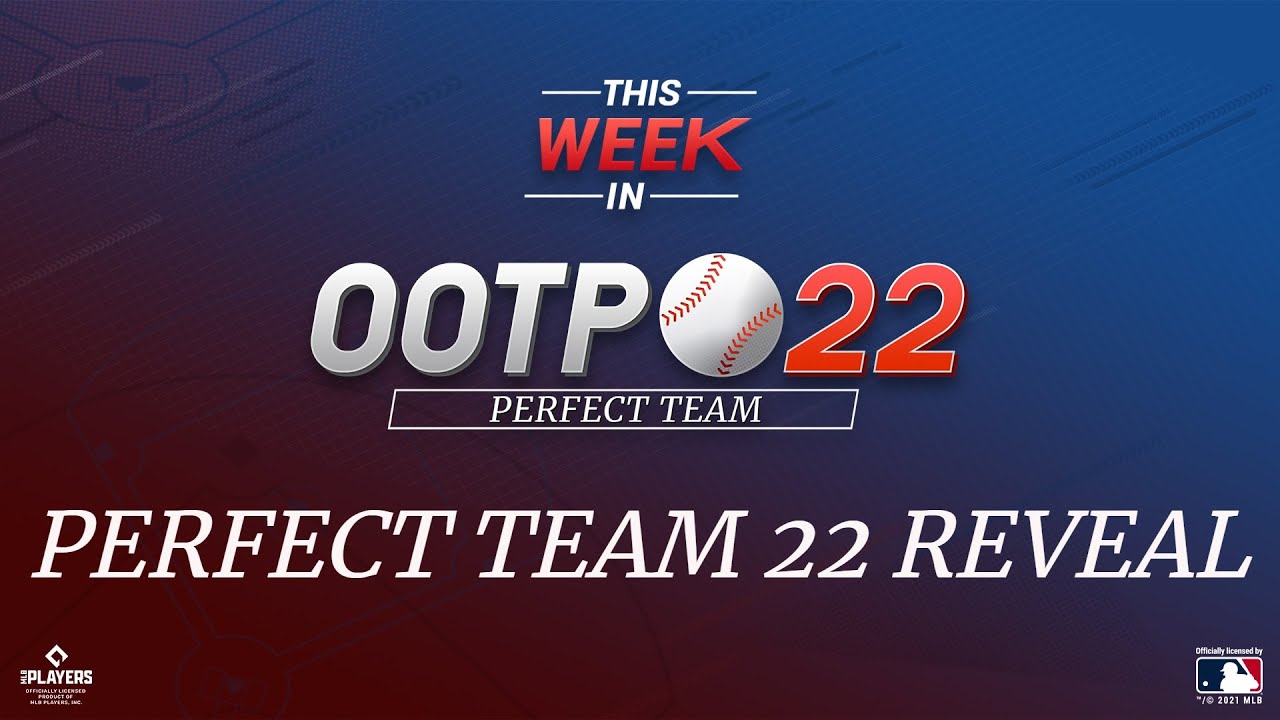 If you are interested in playing PT but want to do it without spending infinite dollars purchasing packs, there are a number of informal leagues that prohibit teams from spending money on packs. You receive your additional players and can only evolve your team through the free packs and points you earn from playing the game. This is accomplished by friend-listing other teams in the league so that teams gets placed they end up with other teams in the league. You often end up in a league with many (most/all) teams from the “league.” It’s the closest thing to a custom league that Perfect Team offers. It’s fun, the people are usually nice but the competition is tough because many people playing this mode are baseball junkies You can join these leagues through the OOTP forums. Here’s a link for one of them: BFF-22 Recruitment Thread - OOTP Developments Forums

Whether you play the “classic” version and try to guide a team to the World Series or play online and pit your skills against other live humans doesn’t matter. All that matters is that it’s almost baseball season once again. Play Ball!

It sounds like the new mobile version will actually release this year as well (but we shall see).

For people that played PT in OOTP20, they are shutting it down in May if you want a last look at your team.

I think I read that the 10% discount will also be available on Steam for the first week of sale. They won’t do preorders on Steam as it messes with their launch sales/visibility in some way.

Thanks for the vids, will have a look to see what’s changed.

I preordered last week, even though I’ve only managed to complete a season and a half in last year’s game (still playing), which is my lowest playtime ever.

It sounds like the new mobile version will actually release this year as well (but we shall see).

For people that played PT in OOTP20, they are shutting it down in May if you want a last look at your team.

Does this mean that OOTP is effectively only playable for a year? I was thinking about buying this for a buddy who loves baseball games, but I’d be reluctant to shell out for software that just stops working after a year. I get that the software wouldn’t get roster updates, etc., but does it actually just become unplayable?

Only Perfect Team gets shutdown after a year. The core (offline) game is unaffected. If your friend is mostly interested in fictional or historical leagues, they would be fine (the current season start would become outdated after a year, but that goes without saying).

What happens when a new version comes out depends on which part of the game you’re talking about. There are two components to the game: the base game itself and perfect team which is an online competition feature.

The base game never expires or stops being playable. When OOTP 22 comes out it will be more difficult (but not impossible) to get updated rosters for the prior versions of the game. Plus of course you will not get any of the new features they add in an updated version. But if you have a game you’ve set up and are playing using the traditional game mode, you can keep playing forever with that version and you don’t need to update the version of the game.

Perfect team on the other hand has to have online support to keep working. I believe they keep the PT servers running for A little over two years for each version. So what was said above is that the PT 20 servers will be turned off in a few months. That is the version of perfect team that was playable starting in March 2019. PT 21 from last year (in OOTP 21) is still going and will go for I guess another year plus a few months. If you buy 00TP 22 and play PT 22 you will be able to play for two years until they shut down the servers.

I hope this clarified and did not muddy the waters!

I watched the trailer and about half the PT reveal video. I’m pretty excited about the changes to PT! I think I’ll spend more time with it this year. I mostly skipped it in OOTP21, and stuff like “missions” is new to me. Plus I’ve never entered a tournament; that sounds interesting too. I have a couple questions that the videos have not (so far) answered.

First, what is this new “perfect draft” mode for PT?

Second, is OOTP 22 going to be on PC Game Pass? I don’t see it on the “coming soon” list. I don’t mine buying it, but if I do, I may drop GamePass, as OOTP was the only remaining game I was hoping it would carry.

To answer my first question: the PT reveal video touches on the “Perfect Draft” mode near the end of the video. We’ll be able to draft teams from the entire card pool and enter tournaments against others. More details coming next week.

I’m thinking OOTP22 is not in GamePass. Will ask over in the GamePass thread.

And to answer my second question: the OOTP devs have “no current plans” to put OOTP 22 on Game Pass, according to yesterday’s Twitch Q&A. I interpret that to mean they might add it in summer or fall, but I don’t want to wait that long. I’m jonesing for baseball now! I’m really looking forward to trying this iteration of PT, as well as this new Perfect Draft mode. And the new 3D parks do look nice.

The official startup schedule has been posted on the OOTP boards:

Only really interesting to you if you participate in Perfect Team. Bottom line is, Tuesday thru Thursday is a beta period where you can do stuff. Friday at 2-3 AM everything resets. You can create your Perfect Team but the simulations will not start until 2PM-ish on Friday to give Steam users a chance to get the game and get started.

And to answer my second question: the OOTP devs have “no current plans” to put OOTP 22 on Game Pass, according to yesterday’s Twitch Q&A. I interpret that to mean they might add it in summer or fall, but I don’t want to wait that long.

I would interpret that as meaning ‘we are not going to, but there’s always a chance we could change our minds, especially if Microsoft throws us a shit-ton of money.’

I kinda want to get this as it sounds like a decent update, but it’s tough knowing the price will go down to $5 or $10 after the current baseball season. Since I don’t follow baseball anymore having the current rosters don’t matter too much to me. I wish there was a mod that had a 1978 setup that was hand crafted like the current rosters are each year, with accurate contract and other info.

If you create a historical league and start in 1978 wouldn’t that have all the accurate information you’re looking for? I think it would unless I’m missing something here.

I think @Charlatan is right, the game can set you up with all the 1978 rosters exactly as they were historically. That would be a great year to revise the disastrous end of the Red Sox season, by making sure you pitch around Bucky Dent!

Even with historical rosters, though, you still have to make decisions about how the season will unfold. Do you use historical injuries and trades and retirement ages, or let things vary? Also, you have to decide whether to import prior league history, which gives you historical records and leaderboards, but takes longer to populate, especially on older PCs. You also have to decide whether to use the historical minor leagues. You can also tinker with how player ratings should be determined. In some eras, left-right split data isn’t available, but I imagine it is available for 1978.

An alternative approach is to have a league draft. I went through that variant in an 1871 league I played in. I’d rather do what you suggest and use historical rosters, personally. It would be sort of jarring to have the Yankees draft Yaz, for example. But I thought I’d mention the draft option in case you’re feeling crazy. :)

If you create a historical league and start in 1978 wouldn’t that have all the accurate information you’re looking for? I think it would unless I’m missing something here.

Do you use historical injuries and trades and retirement ages, or let things vary?

I’ve done it both ways. When using historical injuries and such I just focus on managing the games. It’s more of a nostalgia kick for me when I play that way.

Also, you have to decide whether to import prior league history, which gives you historical records and leaderboards, but takes longer to populate, especially on older PCs.

I pretty much always import league history as I like to have the record books set up.

An alternative approach is to have a league draft.

I’ve done that a couple times, but usually I like to start with a known starting point, like 1978. Sometimes I’ve done recalc with the ratings to keep things in line with history and sometimes I’ve let the OOTP player development engine take over after the import year to have more of an unknown.

I usually don’t make it too far in my leagues as I tend to manage games. I keep planning on starting in 1978 (or earlier), no recalc and let players develop, import rookies onto historical teams, allow trades, and don’t manage games so I can get through the 1990s when I stopped following baseball. 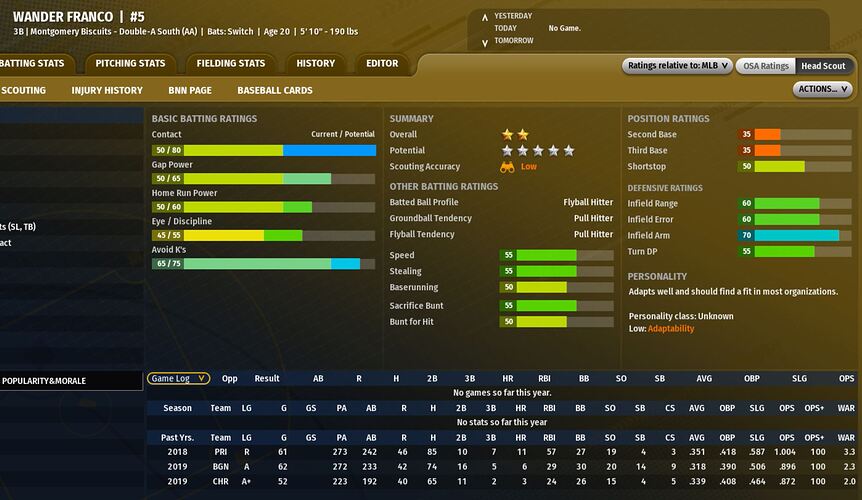 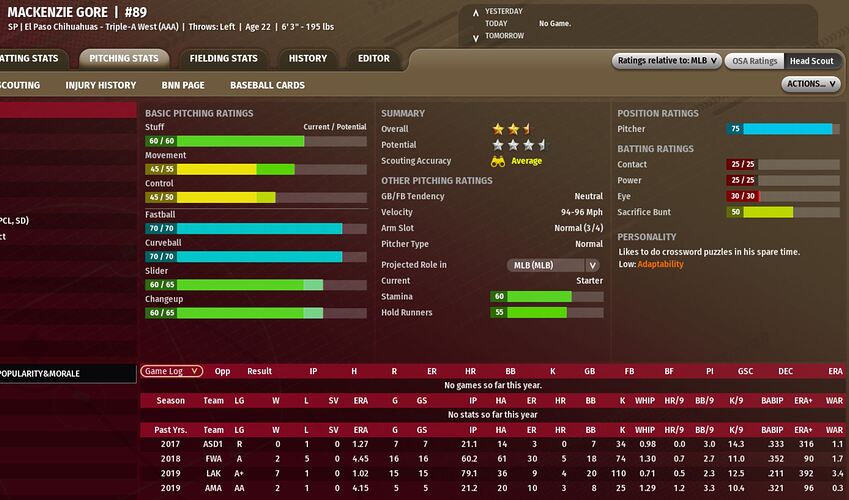 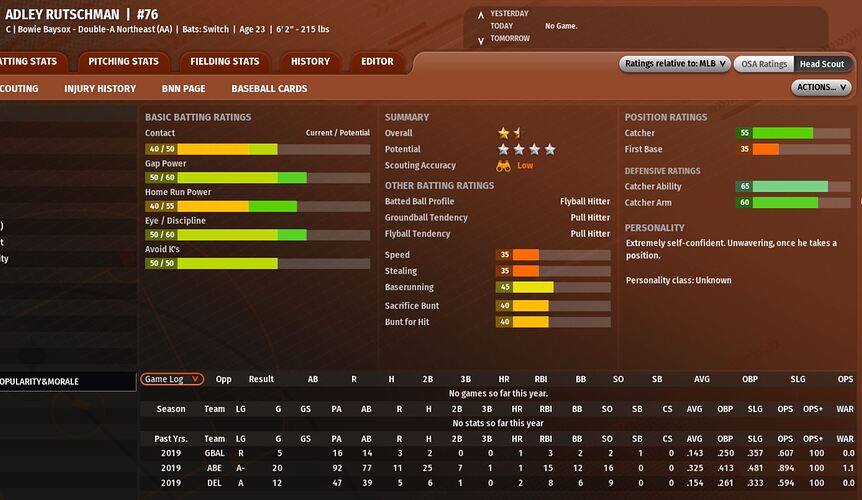 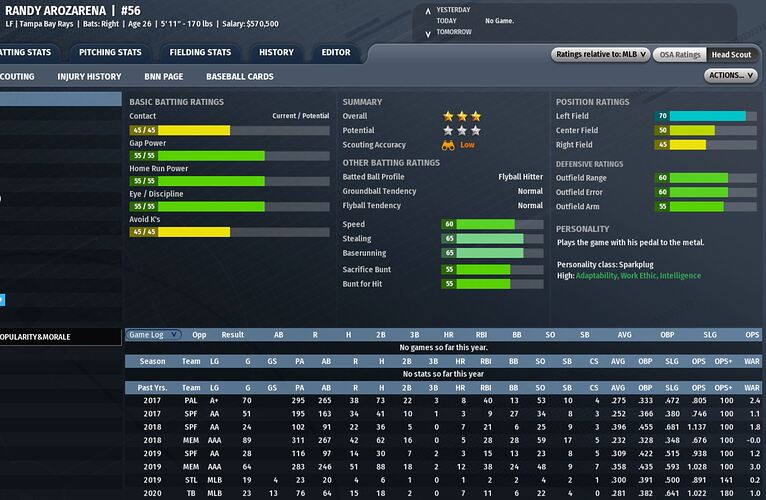 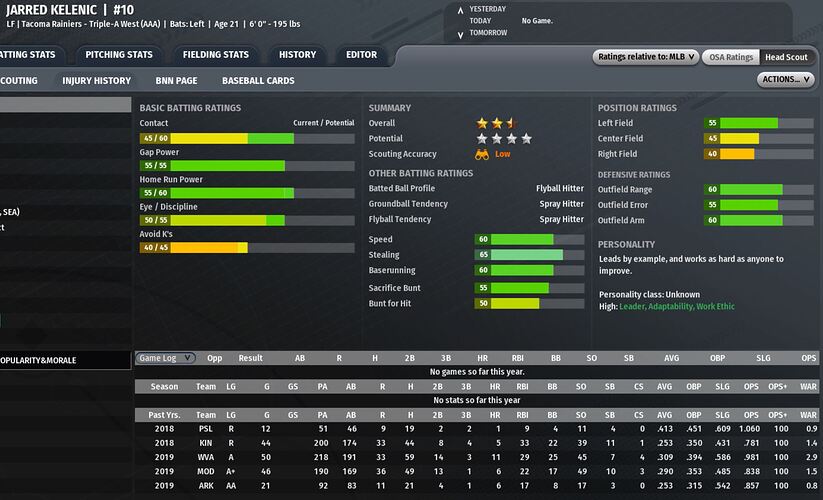 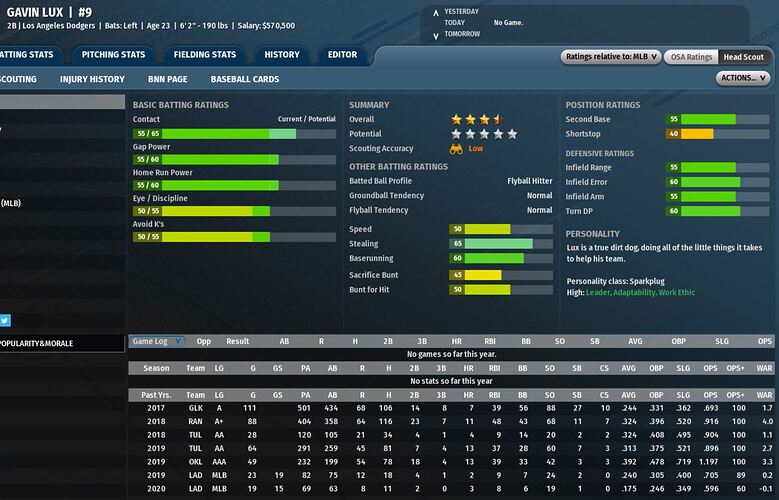 This is one of the biggest developments, right? Since 32-bit was limited to 4 gigs of RAM (I think), it should run its sims much faster with access to the significantly more RAM a 64-bit program allows.

I just simmed two weeks and they took about 5 & 7 seconds respectively. It’s been a while since I simmed outside the offseason but that seems really good.