Someone has a vehicle that just stuns everything like crazy. I had a lot of fun with it until it got wrecked.

I remember getting this vehicle and struggling to work out how to use it, then it subsequently getting wrecked! :) 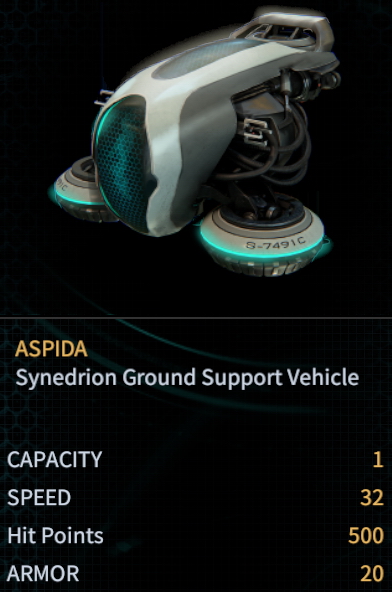 The Aspida is a ground support vehicle used by Synedrion. It is capable of carrying 1 man and has healing/repairing and paralyzing turret . Ingame description says this is New Jericho gauss turret, but it actually is a pair of electric shock...

She is quite the beast until you figure out what she does…at which point she’s an even greater beast! The vehicles – ground and air! – in this game are so cool for how distinct they are.

The Aspida is exactly what I was talking about in the thread about Old World’s undo feature, and how I’ve added my own undo to games like Phoenix Point. The Kaos DLC makes sure you get to play with all the different vehicles and having never used Synedrion’s ground vehicle, well, we’ve all been there, right?

“How does this thing shoot? What’s that? It doesn’t even shoot? Then what good is it???”

Five moves later you’re loading up your Manticore with a half dozen captured specimens, the Aspida’s cargo hull full of salvage, and nary a scratch on any of your soldiers. :)

“How does this thing shoot? What’s that? It doesn’t even shoot? Then what good is it???”

It adds a bunch of new equipment you can swap onto already existing vehicles. However, as far as I could tell, none of the upgrades address the ridiculously small amount of ammo the vehicles get loaded with.

You will no longer recognize them!

(Okay, maybe it’s not that dramatic. But considering that the four faction vehicles were pretty bare bones before, there was plenty of room for the stuff added in the Kaos Engine DLC.)

However, as far as I could tell, none of the upgrades address the ridiculously small amount of ammo the vehicles get loaded with.

The trick to Kaos Engine’s goodies is preserving balance. Vehicles were already pretty powerful. As I’ve said before, I think the biggest problem with vehicles in Phoenix Point is that everyone assumed they work like they did in XCOM when that was never the case! So when Snapshot added a new progression system to vehicles – basically a set of missions to let you test each vehicle in a live fire situation – they’re kind of re-introducing vehicles for the first time.

And one of the things you have to learn is that you’re never going to be able to just sit in a vehicle and drive around, blowing stuff up and playing the mission as if you were a tank commander. One of the ways this is enforced, one of the ways vehicles are balanced alongside your soldiers, is by making the very powerful vehicle attacks limited. So when vehicles get even more powerful, flexible, and readily available with Kaos Engine, it’s usually by adding additional tricks, gimmicks, and abilities rather than just turning them into more powerful artillery with more ammo.

That said, if the upgrade path you want is for vehicles to hit harder or even more often, Kaos Engine will give you options.

I started playing this instead of buying 40k Chaosgate because Phoenix Point has been on my backlog for ages.

I’m playing with all DLC, and I’ve gotten pretty far along, the Behemoth is flying around. I’ve started the corruption mechanic. Starting to get vehicles etc.

There is just a lot going on here. So many squaddies to level up and equip. So many. Xcom doesn’t get near this.

Oooh, I am so glad you asked, because I’ve been meaning to say: My problems with stealth in Phoenix Point have been 100% resovled!

Which is kind of important, because this was one of my main complaints when I played (and reviewed!) the game before. But somewhere along the way, Snapshot patched into the game a bright orange line that marks the limits of your target’s perception. The line is dynamic based on your currently selected unit. Skirt the line and you won’t be seen. It’s simple, thorough, and exactly what you need to efficiently manage the game’s stealth system.

One important issue! Because of what the interface reveals, I discovered that stealth can be very specific to time of day. Basically, because of the size of the maps, stealth isn’t going to get you very far on the average map during the day. It seems like it’s mostly at night, when perception levels are reduced, that stealth will let you sneak around to much effect. Of course, stealth builds will be an exception to this based on how well they’re built. And alien nests are, of course, always dark. But I’ve discovered that the stealth system in Phoenix Point is mostly a day/night system. Which I think is pretty cool. Not quite “creeping around by flarelight in X-COM” cool, but still cool.

But, yes @Baconsoda, one of the main reasons I’ve been getting back into this so much is because one of my main objections vanished into thin air with the addition of a simple but powerful interface tweak.

So I see this is on sale on Epic, but there doesn’t seem to be a “complete edition” with all the DLCs. What is the right way to buy this? Base game + season pass? Year one edition? Everything seperate?

Yikes, I actually don’t know the answer to that question and I hope it’s not as convoluted as it sounds. But ideally, you want the package with all six DLCs. I was assuming the Year One edition gave you that, but I see now it only comes with three of the six DLC.

So on Steam, it looks like the best option for the whole package is to buy Year One ($30) and then buy the $15 “Expansion Pass” that adds Corrupted Horizons, Kaos Engine, and Festering Skies (which would cost $5, $5, and $10 respectively if bought separately). So on Steam, $45 gets you the whole shebang. I’m not sure if there are better options on Epic.

On Epic it appears that Phoenix Point: Year One Edition is £12 (includes Blood & Titanium DLC, Legacy of the Ancients DLC, and the Living Weapons Pack) + Season Pass at £8 (includes Kaos Engines, Corrupted Horizons, Festering Skies) will get you everything for a mere £20. If you do buy from there, be sure to grab an Epic Coupon too for a further 25% off. £15 is crazy good value. You’re probably looking at 20-25 USD?

But do you need the base game plus year one edition? I think those are separate things

no year one edition includes the base game.

Ok, after all of Tom’s comments, I just had to buy this, and I bought it on GOG, since it was on sale. I hope you’re happy, @tomchick !

Only if you are. Be sure to report back as you sample it!

Wowwow, there’s been a lot of change since I last played this. Vehicles are pretty powerful now, huh. Liberated a Tiamat by just packing everyone into a scarab and driving it right to the middle of the map (stopping only to throw down some hate and discontent on some cultists that bunched into an opportunity too delectable to pass). Surprised the Hel II got booted down the tech tree but it was always a weird weapon at the start. Kinda wish the new autocannon you start with was just a tad more accurate, though - not sure if I’ll use it now.

Too bad the soldier customizations are still lightyears behind XCOM2; those haircuts look terrible. Just coz it’s an apocalypse doesn’t mean we can’t be sexy (haven’t Snapshot seen a Mad Max film?).

Just where is my crabcoif?!

If anyone wants a steam key for the year one version then send me a message.

All this recent talk has gotten me interested in the game again (I think I played it a while back during a free weekend). Searching for some recent(ish) coverage, I stumbled across the following video containing a fabulous little ditty which I felt compelled to share (3:51 mark): 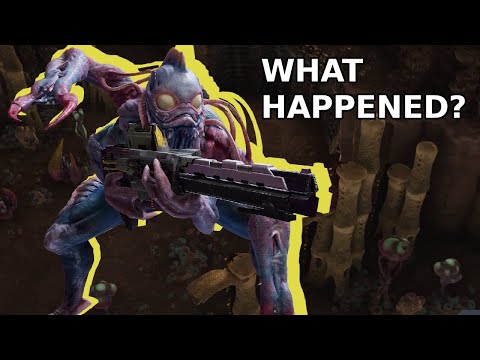 Oh, and thanks to @Chappers for the key! Installing now… :)