The Switch is best for mainline multiplayer gaming as it at least supports it relatively easily. Mario Kart 8 is four-player split. Using JoyCons keeps the price relatively reasonable.

I do think there’s room for improvement in the next Nintendo console when it comes to that. I know they still care about it because they still make sure lots of games have local multiplayer options even if not split-screen ones.

But yeah, Amico has a massive hill to climb and probably can’t hope to find an audience.

I wonder (and this is just blue sky dumb wondering) if streaming videogames (something I’m not super sold on yet, but hey) could possibly make split screen come back if a provider supported it. Four accounts, client just tells the system that it wants super low res streams (because on a 4k stream, each one would just be 1080p max, but you could probably go a bit lower and upres). Then you don’t have to worry about the devs supporting it.

It’s all too disconnected in that scenario I think. People have a hard enough time wrapping their head around streaming videogames… now you’re kind of asking them to do that with four screens on the same screen?

Certainly it’s possible, but I doubt any company will be so bold as to try it, mainly because I think the only way it really works is if you don’t even tell anyone how you’re doing it… which is something the likes of Microsoft and Sony (and Google, and Amazon) can’t ever do when it comes to their tech. They’d want to tout all their cloud this and that and customers will be turned off by all the tech talk.

I think that’s just one of a myriad of reasons Google failed with Stadia. Too much worry about the tech and too little care for the games.

Also… having four controllers in that scenario is super unlikely.

This isn’t the thread for all this stuff, but I do think Switch is successful in part because of the ease of multiplayer. The “gimmick” they showed at the start that everyone wanted to have a chuckle about (girl takes her Switch to a house party on the roof), while very marketingish in its depiction, is an actual reality for people and for families they just play on the TV. Two controllers were snuck into the box with the Joycons being able to be detached and used separately. Never underestimate “easy” as a selling point.

I need some tips on Demon’s Souls as I’m getting beat the same every time. Guys with spears, and the super guy with a shield in the first level? Not sure how many more times I can do this and keep dying.

Umm… is this your first Souls game?

What class did you start with, Royalty I hope so if this is your first Souls game, if not restart as that.

Soul Arrow will kill a lot of bad guys at range safely. Combat you just need to learn the flow, you can also parry/riposte most attacks, sidestep into backstab also is kind of OP/broken for a taking on a lot of human sized enemies. For the shield guy, if it has blue eyes you should be able to beat it if it has red eyes don’t fight it you can come back much much later to deal with that guy.

I assume this is your first souls game if you are having that kind of trouble because Demon’s is generally somewhat easier than later games.

So remember this isn’t a character action game, combat is about picking your openings not smashing the attack button as fast as you can for a combo. Everything is much more methodical 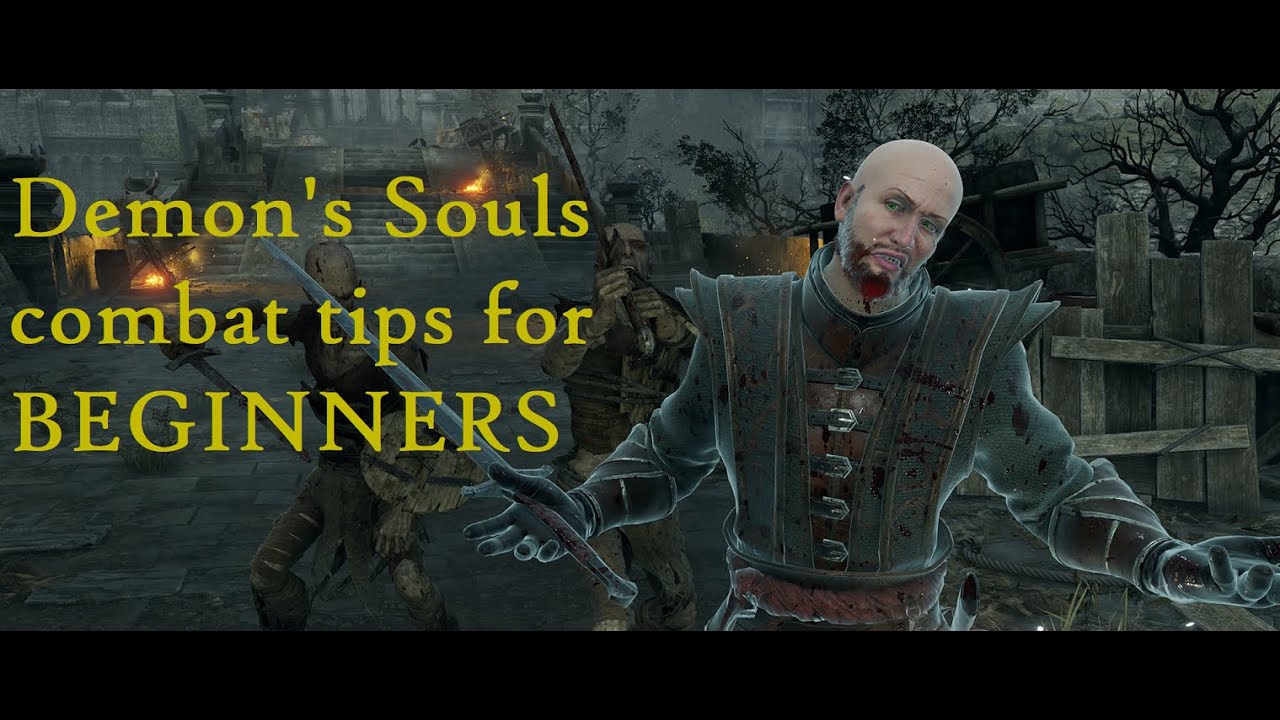 how many more times I can do this and keep dying.

Also, this is like the loop of these games, your character improves but you as the player improve too, but dying over and over is somewhat part of that.

You aren’t supposed to explore the whole level at once. There’s a few monsters that are intended to kill people if they don’t know what they’re doing/underpowered. Turn around from the red-eyed guy.

This is assuming you’re not talking about a boss. I haven’t seen what they look like on PS5 yet.

Blocking is important. Especially on the first level, most of the enemies will attack, then have a short period when they are undefended. Block, strike, move back to let your stamina recover, repeat.

Get the spear on the first bridge the dragon burns and just use that to clear most enemies. You can block while you attack with it.

I just want to say I really, really hate the world tendency system. It’s absolutely ridiculous and just overwrought game design. It’s fucking impossible to get a white world. I want to ignore it but I keep seeing hints about how a thing is blocked because my world isn’t white. I died a lot on one boss and now getting back to it there’s red super enemies in the way. So stupid.

So I’m at the dragons, there’s a blue and red one. Is this where you’re talking about?

I’m curious I keep losing all my souls. It’s been a bit upsetting to get 5,000 and then dying twice. Do people buy stuff with them so you don’t have them go to waste? But then if I go back to the beginning to buy or repairs then I have to fight my way back to the dragons.
Any advice with that would be great lol.

Oh, I’m a knight. I’d like to power on with this dude if I can. And yes, this is my first demons souls game. I never played the other souls game that is super hard either. So right now I’m just sitting on a staircase watching and listening to these scary dragons lololol.

Where I’m having the most issues in combat is when I’m caught with low stamina in a hit I can’t seem to recover to get out of a bind. Which usually goes along with being teamed up by two or more enemies.

Honestly don’t sweat a measly 5000 souls. The experience you get from dying, like knowing where enemies are, is worth more than anything you can buy with those.

So I’m at the dragons, there’s a blue and red one. Is this where you’re talking about?

yeah, the dragons guard some loot, but I wouldn’t go for it. You can kite the red dragon to burn fire on the bridge so that it will kill some enemies, then you should kite him back to the blue dragon, and then run and try to cross the bridge. It is a bit tricky, but you are safe on the other side, 1 or 2 dudes are waiting in a room behind the bridge.

the other souls game that is super hard either.

they appear super hard, until you get into the rhythm of them. Nowadays I can get to the first boss in this level without dying at all, not because I am a super masterful dexterity guy, but because I know the enemies, how they attack (I find parrying hard, so I mostly block)

What class did you start as?

He started as a Knight.

I started as a temple knight thinking I could get miracles but so far there’s just 1 vendor who sells 2 spells. No lightning bolts for me :(

I’m bumming out on heavy armor too it feels way worse than it did in dark souls. Like I’m a snail.

Mix and match your armour but keep your encumbrance under 50% so you don’t fat roll.

Mix and match your armour but keep your encumbrance under 50% so you don’t fat roll.

That’s the other thing, I’m not finding a ton of armor. I have another suit of plate, and some on off drops from these fat bastards. The ones that throw fire and can apparently poise through every attack so I need to exploit pillars to kill them. Maybe I’m spoiled from Dark Souls and that Gold Hemmed Black Robe set which was decent defense and no weight.

I am overall loving this game. It feels more D&D than any of the other Souls games. I just really dislike world tendencies. It adds a level of stress that discourages experimenting, learning bosses, and of course PvP.

you can forget world tendencies if you always go through levels in undead form. Kill yourself at the Nexus. It means you lose a ring slot as you would generally always want the cling ring to be equipped.