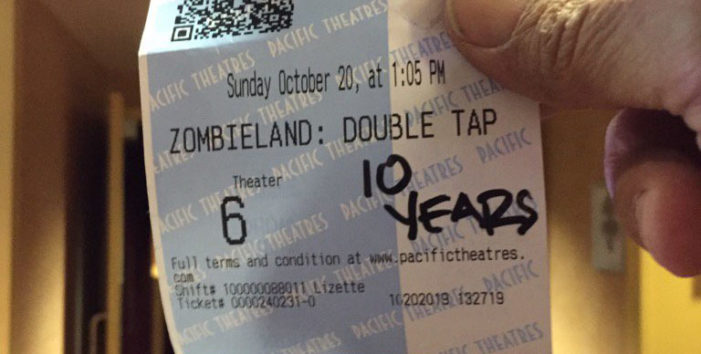 And ten years later, we're not sure if this is a good-bye or the next step. It feels odd either way. But we figured it was better than just leaving everything hanging..

So glad to hear from you guys!

Tom I really don’t get your tastes sometimes. I found Underwater to be so boring; I nodded off for about 15 min in the middle despite its pounding score. Also the fact that you were talking Doom while talking about this film and never drew the similarities between the two? In one of the final scenes of Underwater we have a screen with a corporate A.I. voice giving off demon warnings! And all the monsters looked hella Doom (2016) to me - like litigiously so.

And of course I want to hear the Black Chistmopsis. I haven’t seen it but I’ll give it a peek for you guys…and for Poots.

Kelly you should watch The House that Jack Built. I saw it a few months ago and it was the most rated R shit I’ve seen in a while, and a lot of people missed it when it came out at the end of 2018.

Great to hear the movie podcast again. It’s the only movie podcast I listen to, didn’t realize how much I missed movie discussions. And I’ll have one Black Chrompsis please thank you.

It won’t be the same without that Dingus, but don’t sell yourselves short; despite being bittersweet this was still very entertaining and informative. Aside from all that, though, and this is honestly the most important thing by far - it sounded like the pair of you still really enjoyed doing it!

You made me laugh, ponder and, uh, wipe some grit outta my eye. I also added a few movies you both mentioned to my ‘to watch’ list, as I always do. Including, yes, Black Christmas - if it’s as bad as you threaten then it’s kinda like us poor afflicted listeners are owed an opsis just to be even, right? ;)

Fantastic tribute to Christian. Almost had me crying in public so thanks for that.
And yes, Black Christmopsis please.

That was nice. So good to hear you guys again.
I know Dingus can’t be replaced but I’d happily keep having you guys (plus guests?) in my earholes if you felt up to it.

This is making me so happy this morning. Also, Kelly came so close to accidentally quoting Wrath of Khan and Dingus would totally have not let that slide.

It’s really nice to have you guys back with the podcast. Kelly’s nonsense games that Tom always loses, Tom’s surprise at not hating a movie he was expecting to hate… I do miss Christien a lot, but it seems so happy and cathartic for y’all, talking about movies again. Selfishly, I hope that there are more where this one comes from, in some form.

That sounds like a foreign language title for Firefly.

I watched Black Christmas in a theatre. I need an opsis for that movie.

Teared up at the ending music.

l just finished listening to the podcast. It felt great to hear your voices again! Personally, l’d be very happy if you guys decide to continue the adventure. Obviously, that’s your call. Maybe you could sometimes have some guests, friends of yours, people you got to know through the podcast and the forum etc.

Also, since KellyWand was asking, the term “Giallo” comes from the yellow (giallo in Italian) covers of a very famous collection of Italian detective/mystery novels. This collection happened to be a -very- loose source of inspiration for directors like Mario Bava and Dario Argento.

God its good to have this back. Please do more. It’s not the same, but it can be just as good. And I want more!

And the Dwight Twilley opening song. Man. For whatever reason I associate “You’re Next” with this podcast in a major way…and I missed hearing Dingus laughing in the background.

Oof, that sign-off was a gutpunch.

Also, Tom didn’t understand Parasite? What’s not to understand? It wears its heart on its sleeve more than any film I can think of in recent history.

Oof, that sign-off was a gutpunch.

Also, Tom didn’t understand Parasite? What’s not to understand? It wears its heart on its sleeve more than any film I can think of in recent history.

I understood it. I just don’t think I “got” it. I wasn’t really standing in the right place to catch the pitch Bong Joon Ho was throwing. It’s my diplomatic way of saying it didn’t work for me.

Besides, Burning casts a tall shadow over Korean social commentary for me. I might not be ready for a farce that feint towards horror halfway through.

Besides, Burning casts a tall shadow over Korean social commentary for me.

Agree with you there. I think it makes a pretty awesome companion piece to Parasite, though. They’re largely attacking the same issues, but with very different approaches.

I really like abrupt tonal shifts in movies. As I’m sure I’ve said here before, my favourite horror movie is Audition.

Tom I really don’t get your tastes sometimes.

Okay, I defy you to watch Sphere and not conclude that Underwater is a masterpiece in comparison. :) I liked the monster design in the finale. I liked the hardware in the movie, especially those mech/diving suits. I liked having TJ Miller, John Gallagher Jr., and Vincent Cassal (two out of three from this season of Westworld!) along for the adventure. I liked the pacing. And as a fan of underwater horror, the closer a movie gets to depicting the rise of Rl’yeh, the more likely I am to stand up in my seat, pump my fist, and go “Nice!”

But I freely concede that Underwater is dumb and derivative. Neither of those elements bothers me much in horror movies.

Kelly you should watch The House that Jack Built.

Yeah, he probably should. I think my reserve of patience for Lars von Trier has been exhausted, though. But I will concede that House that Jack Built is the thinking man’s Bloodline. Did you see that? I don’t think anyone did. Sean William Scott is a mild-mannered high school counselor and family man by day. By night he’s a ruthless serial killer. He is soooo bad in the movie, but he’s trying soooo hard. It’s really endearing. Dumb movie overall, but a must-see for fans of Sean William Scott’s attempts to de-Stiffler-ize his career.

Whatever the movie podcast is or will be, is not what it was.

But please… do more movie podcasts! Do more of these! Love you guys! Honestly, I don’t care about a Black Xma-sopsis. It can be the lost -opsis, although it’d be nice to release if only for @marquac to get closure. :)

However more synopses in the future, more movie podcasts.

Heck, there’s now a Chrome Netflix Party extension. You can share your ‘party’ URL and everyone on the forum can watch a stream simultaneously. Well, that might not actually be a good thing, but options are good.

Be well, and podcast more.

Maybe since the new movies are all getting pushed back, you and Kelly can make something new of the podcast. Go through a set of favorites, or challenge each other to find certain movies - like the 3x3, but you watch the movies on your list. And you should call the list Chick Flicks, because that would be funny.