Tom Chick and Kelly Wand finally see Nomadland and they both agree that it's no Monster Hunter..

The animated GIF thread of 2020 in which posts without animated GIFs will be terminated with extreme prejudice
tomchick March 27, 2021, 5:32pm #2

Just a heads up that someone pointed out Paul Raci is NOT a non-actor. Dude has, like, 30 credits on IMDB. I stand corrected, but I’m not less impressed by his performance in Sound of Metal.

I guess what I must have read and misremembered is that he’s deaf in real life, which I’m pretty sure is true of all the deaf characters in Sound of Metal, include the non-actors. Sorry, Mr. Raci!

I liked the movie less after listening to the podcast. I can’t get Ed Norton’s voice out of my head calling Frances McDormand a tourist, which I know is unfair.

Almost to the very end I kept expecting something horrible to happen and so I watched most of the movie with a feeling of dread.

Was that an honest to goodness paid sponsorship at the beginning of the Movie podcast @tomchick?

Was that an honest to goodness paid sponsorship at the beginning of the Movie podcast @tomchick?

I’m afraid it was not! Our “sponsorships” are me making fun of dumb movies.

I just want to say, thank you @tomchick and Kelly. I’m so happy you two are keeping this going.

Seconded. Also, I basically felt the same way about Nomadland: It had some pretty images, but ultimately I feel like it wasn’t saying anything. Barring some revelation about why Fern chose that life, the viewer just has to project their own explanation on the movie.

I think a movie says what it wants to say with how it ends. The main character has an epiphany and then does something at the climax. Usually the epiphany in a film unlocks the characters flaw or broken bit. Here, I think it’s that Fern needs to keep moving, like a shark.

Right before she goes back to Empire, Bob Wells tells Fern, “Out here, there’s a lot of people our age. Inevitably, there’s grief and loss. And a lot of 'em don’t get over it either. And that’s okay… That’s okay.”

Fern takes that in, then heads back to Empire to sell her belongings, pass through her dead hometown, her dead job, and her dead home. I think the climax is the moment she walks through her back door, out into the place she described to Dave’s daughter-in-law Emily as “There was nothing in our way.”

So it’s almost like Fern’s epiphany in this film is accepting that it’s okay not to have an epiphany. To stay broken is a true human experience.

Man, you guys are terrible with your Marvel characters, the girl with the hair isn’t an Eternal, she’s an Inhuman. Totally different, as everyone knows.

Almost nobody knows, the Eternals was a truly left field choice, Marvel has made a bunch of second tier characters into well known territory, Eternals is like, 3 people on Earth care about them. Hell of a cast though.

Too beautiful. I had to commemorate it. 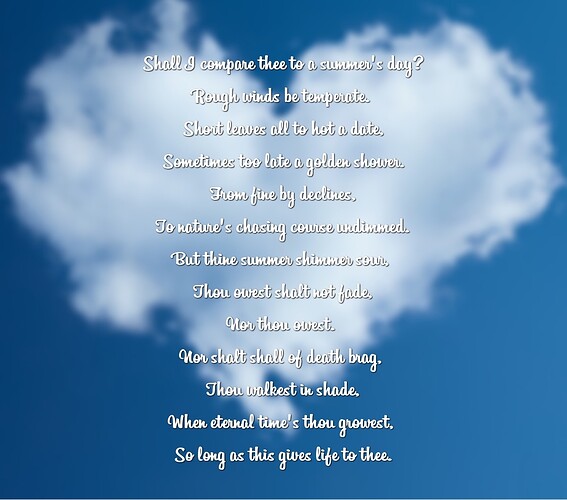 I don’t know, Tom. Frances McDormand was twenty-three when the seventies ended. Assuming that she’s supposed to be roughly the same age in the movie, you’re saying that she never went out again in the intervening thirty-odd years, the overwhelming majority of her adult life? Nah. Also, I agree with Kelly: no disco ball, no disco.

Too beautiful. I had to commemorate it.

I did like how they establish that she taught Shakespeare when she meets her friend in the sporting goods store. That makes the sonnet rollout a lot less awkward. And it’s where you can see that McDormand is an accomplished actor! It’s, like, whoa, she can do Shakespeare!

I don’t know, Tom. Frances McDormand was twenty-three when the seventies ended. Assuming that she’s supposed to be roughly the same age in the movie, you’re saying that she never went out again in the intervening thirty-odd years, the overwhelming majority of her adult life?

But the whole time she lived in a North Dakota town that existed only as a support structure for a drywall plant. She probably went to a disco or two when she was younger, but after that, her only frame of reference was whatever bar was in that North Dakota town. I stand by the Good Writing, Bad Writing ruling!

False! She is from Nevada, home of the nightclub.

I’m about 60 episodes away from listening to every qt3 movie cast ever, and I’m pretty sure Meek’s Cutoff takes it for most-frequently-mentioned movie on the show. Anyway, I didn’t think it was that good. Lesser Michelle Williams.