Qt3 Movie Podcast: Once Upon a Time in Hollywood 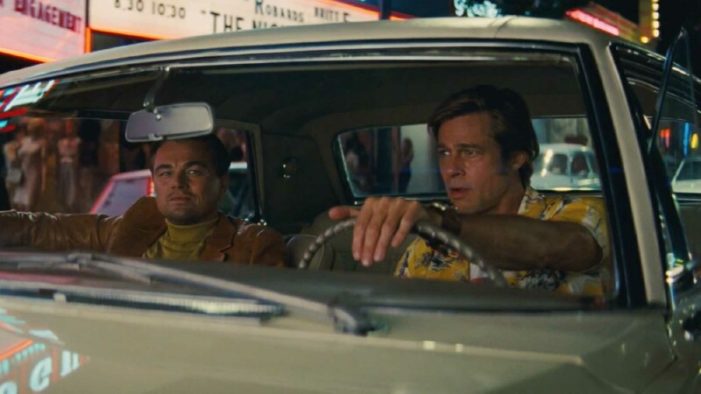 A Tarantino movie about Hollywood, starring two of Hollywood's biggest celebrities, and with a running time of two-and-a-half hours? Hmm..

I was going to write in for this one, but I just saw it last night, and couldn’t sort out my feelings about the historical liberties in time, other than being happy I didn’t have to see Sharon Tate getting murdered. I like Tom’s take on it as a wistful fairy tale about what should have been, and the whole discussion for that matter.

(I’m not down with the comparison of Leo’s performance here with The Revenant though. C’mon. He’s leagues better here. But then again the material is leagues better too.)

Margaret Qualley should also be familiar from The Nice Guys - she was Amelia, the runaway mob target. It’s actually be a pretty neat double feature with Once Upon A time In Hollywood - you wouldn’t have to tweak Leo and Brad’s relationship much to slide them into a Shane Black movie.

This opens here Friday, but it could be the dubbed print, the subtitled print, or both. Will definitely catch it if it’s subtitled.

My wife, who is currently quite pregnant, went to this with me. I hadn’t really given much thought to the real world events when I suggested this film, so as soon as I saw the very pregnant Sharon Tate on screen I was like “oh yeah. Well, this night is going to suck.”

The best movie dog might be in I am Legend, but the best dog is Bear from Person of Interest and Cliff’s dog made me feel the same way. He made me almost miss my horrible escape-artist screen-destroying old boxer-lab.

Yeah, that dog was pretty cool. I can’t remember the name, but I liked him.

I love that you brought up Day of the Locust, Tom. The ending of that film, featuring a young and unbelievably obnoxious Jackie Earle Haley and a broken Donald Sutherland, remains genuinely horrific nearly forty-five years later.

Yeah, Day of the Locust really is an underappreciated movie. It’s just so uncomfortable and weird and disturbing in vague ways that fester until that horrific ending. I wonder if it’s underappreciated because it’s missing the star power that Duston Hoffman eventually lent to Midnight Cowboy. Maybe if William Atherton’s career had played out as the leading man parts he got in Day of the Locust and Sugarland Express instead of the character actor parts that made him famous in Ghostbusters and Die Hard…

Ah, right, I forgot that was Jackie Earl Haley! And since I knew Nathaniel West long before there was ever a Simpsons cartoon, the name Homer Simpson has always had a different kind of weight for me.

I actually think both Dingus and Tom are kind of half-right about the film style. What I noticed is that the film really wasn’t 1970s cinema…but it wasn’t a throwback to Eisenhower so much, either. It was more of an homage to the pre-MPAA code late '60s when films like Blow Up made it over to America as unrated before the code, and then we got that vivid color use like you see in The Graduate and Bonnie & Clyde and Easy Rider, etc. It was a really transitional era that wasn’t quite pre-Beatlemania 1960s or post-Manson/Altamont 1970s cinema.

And I also love the ending and Rick’s “ascension”, and the film’s title card comes down as “Once Upon A Time…” and yeah, wistful is the right word: The fairytales that begin “Once Upon A Time” have a happy ending.

Oh! And here’s how I knew there weren’t going to be any car crashes: the music choices. Quentin Tarantino knows he’s got Deep Purple doing “Hush” or Neil Diamond doing “Brother Love’s Traveling Salvation Show” or Los Bravos amazing “Bring A Little Lovin’”: you just know that Tarantino loves those songs so much he’s not gonna interrupt them with something like a dumb car crash.

BTW, a great, easily missed throwaway scene that feels like a Tarantino wink and nod:

Sharon Tate then asks the bookseller in the rare bookstore for a book she’s ordered: a first edition of Tess of the D’Urbervilles, which she says is her husband’s favorite book.

And in real life, Roman Polanski ended up making a movie version of that book, “Tess”, with his reputed (both deny it, but it was pretty much considered a poorly kep secret at the time) 16-year-old (at the time) girlfriend Nastassja Kinski in the lead role–in other words, someone he’d turned to for love after Sharon had died.

Oh! One other thing about the podcast: is there a better song for “Menacing 1960s evil chaos is about to happen” than Vanilla Fudge’s crazy psychedelic version of “You Keep Me Hangin’ On” with that long feedback-y intro and menacing organ?

I was listening to the podcast earlier tonight and it sounds like some of the details from the beating that Brad Pitt lays on the Manson gang at the end is what actually happened to Sharon Tate and the others that were murdered? Is that right, or did I misunderstand? I don’t know all the details about the historical crime, but if that true about the movie, that’s a pretty disturbing level of detail. I might be reading too much into what was said. I feel certain there was no flame thrower at the actual murders.

Good podcast Tom. I haven’t actually finished it yet, but I agree about the wistful stuff. It was weirdly satisfying and disturbing all at the same time.

Great catch on Tess! I was trying to figure out the Thomas Hardy connection, but I didn’t realize Polanski did the movie version. In the alternate reality of Once Upon a Time in Hollywood, Polanski’s Tess will star Sharon Tate.

Oh! One other thing about the podcast: is there a better song for “Menacing 1960s evil chaos is about to happen” than Vanilla Fudge’s crazy psychedelic version of “You Keep Me Hangin’ On” with that long feedback-y intro and menacing organ?

Right? Vanilla Fudge is already freaky enough. But after Once Upon a Time in Hollywood, I think even the Supremes version would sound ominous. It’s kind of like what happened to “The Air That I Breathe” from Lynn Ramsey’s You Were Never Really Here. It’s used during a very, uh, memorable and weird scene. Oh, and another song that feeds into the sense of dread in Once Upon a Time is The Rolling Stone’s Out of Time. “Baby, baby, baby, you’re out of time.” Really, Quentin? That on the nose? Yikes!

By the way, my introduction to You Keep Me Hanging On was a cover version on some punk compilation I had when I was a teenager. At the time, I had no idea it was a cover. Here it is on Youtube:

Oh man, that takes me back. Young dumb angry Tom Chick driving around Little Rock being all disaffected and stuff.

I might be reading too much into what was said.

Ah, I can see how I might have given that impression. My bad. I meant the level of violence and not the specifics. Thankfully, I don’t know many of the details of what happened, because what little I ever did know has stuck with me and it’s disturbing enough.

I was never sad watching this thing. The best part was expecting to be sad about Sharon/Margot, and then even that got whisked away.

I get Tom’s Trump-poisons-everything-even-period-pieces malaise, but I’ve learned to compartmentalize and eat around that. Life’s too short and the movie’s too good.

it sounds like some of the details from the beating that Brad Pitt lays on the Manson gang at the end is what actually happened to Sharon Tate and the others that were murdered?

In the movie, the Manson family’s attempted murder starts similarly with the pointed gun, gathering the house occupants into the main room and Tex’s “devil’s business” line. Once the dog leaps, everything that happens is nothing like history. Starting with the dog was a good idea. For those who know the details, the violence needed to be absurd or else it would have come off like some sort of reverse murder ritual as the actors dutifully followed the steps described on Wikipedia.

Thank you, Tom, for articulating the wistful sadness that the ending evoked. I didn’t write in because I couldn’t find the words.

Oh, hey, thanks for this @cornchip. I took my twenty-something son to see it and he had never heard of Sharon Tate. At one point, he leaned over and asked it was real. He knew Manson, but I think he was asking about Leo and Brad. I told him it’s a little of both but sometimes it hasn’t always been clear to me where the line is drawn.

Oh, and another song that feeds into the sense of dread in Once Upon a Time is The Rolling Stone’s Out of Time. “Baby, baby, baby, you’re out of time.” Really, Quentin? That on the nose? Yikes!

One thing that I want to echo loudly from the podcast is that one of the joys of seeing this movie again – especially if, the first time you saw it, you were basically curled up in your theater seat in a fetal position of utter dread – is that being able to relax and enjoy all the little cool things that QT does in the film is just a joy, and one you can really luxuriate in the second time you see it. Little stuff like this musical cue, for instance.

After listening to the podcast, I’m considering seeing if I can fit in a third viewing before it’s out of theaters.

Haven’t listened to the pod yet, but against all my expectations I really liked this movie. I’m no QT fan, really – like Pulp Fiction and Jackie Brown a lot, Inglorious Basterds well enough, but the rest of his recent ones I either haven’t seen or actively disliked.

Turned out I liked this one all around. I was thinking while I watched it “what’s the point of all of this?”, but there doesn’t need to be a point. QT never has much to say, it’s always just popcorn stuff, this one is no different. I thought Decaprio and Pitt were both really good, and even the writing, usually something I find spotty at best with QT, was good. Of course, the movie looks great.

Look forward to listening to you guys tomorrow – I have to drive a ways.