Rise of the Tomb Raider is not coming to PlayStation 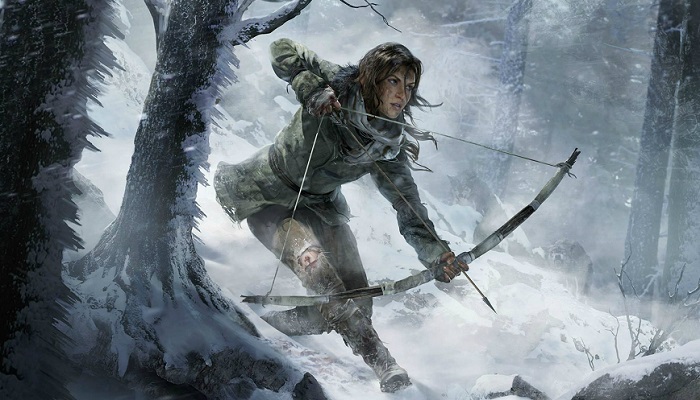 The first big news out of Gamescom is from Microsoft, and it's not good for PlayStation owners. Square Enix has partnered with Microsoft and is making Rise of the Tomb Raider an exclusive to Xbox One and Xbox 360..

"Dear game players- we think you are a bunch of fucking morons that buy into this bullshit corporate tribalism. We are hoping that you feel like you have rush out to buy a $400 system so you won't miss out on a $60, eight hour long game that you will play once and then let it sit on your shelf for years until you dump it at Goodwill along with the Xbox One and all of the new entertainment experiences it offers. Thank you for your loyalty, suckers. Your pals, Microsoft & Square Enix"

Yeah this is pretty weak. Tomb Raider was my favorite game of 2013, but there's no chance I'm shelling out for an Xbone to play this one. I'm just holding out hope that it's "exclusive" in the same way that Ryse and Dead Rising 3 were.

I often replay my favorite games a few years down the line, particularly if they're only a dozen hours long and carry the allure of heightened difficulty levels, diverging paths, or new DLC content. The first Tomb Raider fits those criteria nicely, so going on the belief that I'd get my money's worth out of the purchase, I was planning to buy Rise of the Tomb Raider right at release. On the PC.

Now, as Barnes says, my only options are to earn the right to play this game by spending $400 on a new console...or to simply spend my money on less hostile products. It's remarkable that either Microsoft or Square would think that's a hard decision.

Right on man. This stuff used to be leverage to get me to buy back when the industry was much smaller than it is today. These days I have more games than I have time to play and generally most of those are below AAA prices.

They are literally banking on the idioicy of the consumer to sell the game- and the console. They are banking on you, the game player, feeling like you will be missing out on something if you don't sign up for the Microsoft Tribe. Only an idiot or a child would be so despondent about missing Tomb Raider that they'd make a $460 purchase to avoid the sadness and depression of lack.
The good news is that people with SENSE and MATURITY are like you and understand that there ain;'t no video game in the world worth buying a console for. And there's PLENTY of other games. Given a choice between the consumer-hostile product and the one that respects the buyer, only those who buy into this ludicrous feudal-corporate tribal marketing will pick the masochistic route. Exclusives are one thing when ti's something like Nintendo does- offerings that are literally not possible on other platforms or that do not have directly competitive alternatives- but another when they're just another video game like Tomb Raider will be.
Shit like this is why I stopped writing about video games so much, so tired of all of the teenage crap, so tired of all of the industry shenanigans and lack of respect across the board.

Completely disregarding the "nope, exclusive", I've been seeing many refer to "2015 exclusive" as the key phrase. This seems to be presented in the same manner as so many other timed deals, including the usual contractually obligated dancing around the term exclusive. I'd be happy to give those tomb raider people another 60$ for 8 hours if it's anything like the previous game. Hopefully I can in 2016, without having to buy a second console.

Meh. Some people can afford to buy all consoles, although I can definitely see some people not wanting or being able to do so. That being said, can't you rent consoles for a weekend anymore? I'm not being rhetorical, can you still do that?

Then again, it's not impossible that Square will flinch and you'll see the game pop up on Steam one day. Never say never.

I know that you can at a local family video store near me, but I don't know how that works in the era of console user accounts and hard drives. Do they wipe it every time it comes back?

Hate to break this to you, but exclusive dealing is a fundamental part of virtually all industries, not just videogames (and not just consumer-facing industries). They aren't banking on anyone being stupid. They're trying to add value to a console through numerous exclusives, obviously. Tone it down..

If they don't want to support PC, I have no reason to support them. I won't actually care for a while, though, since I haven't even finished the first one.

I actually have a buddy with an Xbox One who never uses it. I've just borrowed his on the rare occasions there's something on the Xbox One I want to play (in other words, to play Dead Rising 3). I'll certainly do the same for an exclusive Tomb Raider game, but what a weird exclusive deal for both parties. Tomb Raider isn't a system seller, and the Xbox One has a pretty sad user base. Whatevs, guys. Now Microsoft and Square/Enix are like a pair of weirdos who show up at the prom and sit talking in the parking lot instead of joining the party.

Not to mention that Square was crying 'Poor' after selling 3.4 million copies in the first month. Listen when you make a game, and have it sell more than any other game in that series, You don't get to claim 'poor sales'. If the game didn't sell well enough at that point, your accounting departmetn is a bunch of friggin idiots. Literally incompetent. Budget better, plan sales projections better.

To top off the idiocy, when you claim a game didn't meet sales projections, the solution is NOT to make the game exclusive to any platform. Especially one that has a fraction of any other console install base. Especially one that is more than an order of magnitude smaller than your previous release supported.

To top it off it's exclusive to a platform that has a smaller install base than your previous game sold copies. Let me repeat, if every single owner of the Xbone bought Tomb raider on release, they would still be over 1 million below the lifetime sales for Tomb Raider 2013. It is literally insane. Square you are stupid. Stop it. You can't afford to leave money on the table like that (no matter how much money Microsoft put on the table). Well let me make you an epitaph now. RIP Square Enix 2015 'Was run by a bunch of morons'

I was looking forward to that game and would have paid full price at release for it. Now it's just a lost sale for them. I wonder why they don't realize that most entertainment products have near-perfect substitutes. It may not be Tomb Raider, but I think Witcher 3 [Insert your most anticipated title/back catalog of games here] will do.

It is still baffling to see that publishers actively don't want my money. It's not only platform exclusives, but region limitations on other products as well.

From the post: "As you may have seen, we’ve just announced that Rise of the Tomb Raider, coming Holiday 2015, is exclusively on Xbox." That is pretty unambiguous.

Oh yeah Nintendo offers so much value rehashing the same tired old Mario and Zelda games decade after decade. Yep! Sure! Now with Motion Controls YAY! What the hell ever.

Microsoft Tribe? What kind of childish crap is that? As a gamer I don't care what platform something is on, be it PC, PS4, Xbox or whatever. If a game is good, I'll play it eventually. No one need rush out day 1 to drop 400 dollars, in the case of Tomb Raider it'll likely eventually get a PS4 port anyway. Which is moot for me, I own both and a high end PC because I enjoy gaming, and don't buy into the whole childish console war you can choose only one bullshit.

My guess is you stopped writing about video games because most of them grew up beyond cutesy platformers and began embracing aspects of reality and in some cases maturity, or at the least mature themes and scenarios. I'm not 12 anymore, I much prefer a gritty war shooter or a tactical RTS/TBS to Mario jumping around the mushroom world like crack head needing a fix for the umpteenth time or Link saving Zelda for the 10000 time.

Well, it sounds like turning 13 has worked out pretty well for you, kid. Enjoy your adulthood of gritty war shooters!

I think you would be shocked as to how much marketing is based around banking on the stupidity of consumers.

Thing is people have different likes, you may have sworn off the industry calling it some sort of "tribe mentality" where you can only like one console or the other, or only be a PC or console gamer, but that isn't reality. Some of us just enjoy gaming regardless of platform. Nintendo is my only exception to that, the direction they've gone with motion controls and under powered hardware is only going to hurt them long term when the majority of "core gamers" don't even bother. As people age their taste generally change as well.

The industry has grown up, the technology that limited most games to all being side scrolling platformers in the 80's and very early 90's isn't limited anymore. Games have evolved beyond saving the princess and finding the Triforce, It's a shame with the brilliant minds, like a legend like Miyamoto at Nintendo they're still stuck in the past.

I'm 37 btw but nice snark there. Not that you care I'm sure.

At this point, with the YouTube Let's Play culture it's even easier to enjoy a game that is an "exclusive" somewhere else. I certainly won't buy a console for a single game, but I am more than happy to enjoy the story and cut-scenes via YouTube.