[MEN]
Then he says something mean to get her back

[WOMEN]
Then she complains that he don’t understand her

[MEN]
And then he gives her a smack

I love this part. Tells you about the era and makes a joke after without blinking an eye.

Plus the bit at the end with Betsy. I saw it coming but the delivery was spot on.

And then the two of them get playfully spanked during the choreography. The shocked look on Melissa’s face is great.

It’s not a metaphor.
Oh no, it’s something more.
It’s a literal bridge.
Sister, get that Mister.

Everyday you’re hesitating
is a day your looks are fading.

LOL, I love this show so much.

Yeah, whoever described the show as “delightful” hit the nail on the head.

Damn earworm. I’ve been singing “I’m a homosexu-aaalllll!” under my breath all day :P

So we noped out after the third episode. While the cast and music are great, we just haaaaaaate Josh (despite our love of KMK) and actually don’t want him to succeed.

We lost interest in it after three episodes. There’s certainly a lot of cleverness to it, and the music isn’t bad, but at some point it starts to feel less like a parody and more like a standard musical.

My interest has waned as well. There seems to be a clear formula here (two musical numbers per episode) and a pacing that feels incredibly padded out to make this a TV show. There have been entire episodes where I wonder how necessary the entire episode was in order to move the story forward.

So is Central Park Season 2 the superior Apple TV+ musical? Because that show is SO good this year.

I’m off of AppleTV for now. I’ll subscribe again once Ted Lasso, Schmigadoon and Mr Corman’s current seasons are finished so that I can catch up. But I don’t like what you guys are saying about my favorite new show!

I’m still enjoying it a lot. It’s pretty low-stakes, but really charming. I’m interested in seeing where it goes in the last episode. And I like musicals so don’t mind if it’s like 50% parody of a music and 50% actual musical.

Six breezy episodes seems about right, though. It’d certainly wear out its welcome if it ran longer.

Main question at this point: will Keegan-Michael Key sing?

I didn’t really like the song Kristin Chenowith got this last episode. What’s with taking your most accomplished singer and having her rhythmically talk for 80% of the song? And her character is far too one-note for the show. There needs to be something more than a severe expression and bad makeup to her.

And yeah, I’m losing interest too. I liked Jane Krakowski’s segment in this episode, but she appeared out of nowhere and the writers didn’t really have any idea how the audience is supposed to feel about her. “Of course I’m a Nazi.” What? And I don’t think I’ve laughed at the show in about 3 episodes.

I have a feeling a huge number of the jokes are really for fans of old musicals, and I’m not the intended audience.

I have a feeling a huge number of the jokes are really for fans of old musicals, and I’m not the intended audience.

Yeah, I think in context the joke about “Of course I’m a Nazi” is more of a Sound Of Music joke (one of the few musicals I know fairly well) than a circumstantial joke about her character or Melissa.

What’s weird is that I think this show would’ve maybe been one to release all episodes at once. Because my issues with the show involve how disconnected every episode feels right now. Like you said Matt, where’s Krakowski’s character been? Why do characters simply disappear for episodes at a time (I mean, I think we know – scheduling of the various high-profile stars. But still…)

My daughters have been in theater and LOVE musicals, so they are loving it except for KMK being a dick. I’m kinda cranky and hate musicals so I liked his character at first.

My youngest helps me with the references to other musicals and I pretend it is interesting. :)

I don’t dislike it. It is funny in parts, but as with so many things, if it wasn’t something I could share with my kids, I probably wouldn’t still be watching.

I didn’t really like the song Kristin Chenowith got this last episode. What’s with taking your most accomplished singer and having her rhythmically talk for 80% of the song?

Oh, I enjoyed it! It was a pretty remarkable one-take technical achievement. (Though I suppose all musicals on stage perform their songs in one take. Except for one time we went to see West Side Story and there was something wrong with the sound system so the actors stalked off stage for a half hour…) And it was a pretty good stylistic parody of that one song from The Music Man that starts with T and that rhymes with P and that stands for pool.

Yeah, see, it really helps to know the source material, which I generally don’t. I’ve seen Sound of Music, but that’s about it. 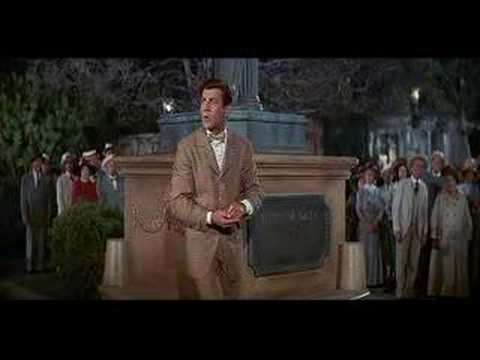 Apparently Chenowith spend the two weeks the crew had to spend in quarantine prior to production memorizing and rehearsing her part, then had to learn the choreography of the one-take sequence in just a couple of days, then film while singing live.

My daughters have been in theater and LOVE musicals, so they are loving it except for KMK being a dick. I’m kinda cranky and hate musicals so I liked his character at first.

IMO, Josh (KMK) might be a jerk, but at least he is being depicted as the type who realizes when he’s hurt someone and is willing to apologize for it. I find the Melissa character a lot more annoying because she’s both being depicted as both very shallow and with zero social intelligence. The “modern lady fighting 1940s morals” could have been fun, but the show basically plays that for laughs at her rather than at her situation.

Not as fun as it thinks it is.