On my front I will say we found our game got much better when one of the players moved from a laptop with a integrated GPU to a desktop PC with a decent graphics card. Neither are powerhouse PCs. Before there was this constant, annoying lag. Now its smooth.

we also had our first TPK. Picked a fight we thought we shouldn’t, but did.

Yeah, it is. I don’t know if I will really get into the single player game, but it really feels like playing D&D with my buds. We are just doing user-generated content for now.

Oh! I missed this, but we are getting Bard, Warlock, and Monk coming here soon.

The time to submit ideas for one of each subclass was the 19th, so I didn’t bother saving the link, but it’s great we’re getting yet more Solasta stuff.

How has the user-generated content been? Are they single dungeons or are there campaigns?

The one we are working through is a campaign levels 1-12. It’s pretty good. No major issues so far with the coding or content.

There are smaller ones like the old TSR modules that are just a few levels.

How annoying is the system for getting the user content?

It has Steam Workshop support, so it’s easy.

Yeah, for downloading dungeons, its super easy to use the workshop.

If you want a modified game, then you go to Nexus to download and follow the instructions. I recommend and use the Community Expansion mod.

I bought this on PC, but it just came out on Xbox it sounds like. Anyone play it? If so hows the font size and controller UI?

I tried it very briefly in my livingroom on the Xbox, and works pretty nicely - font is big enough, and controls are tight.

Personally, I am waiting for the controller support to come to PC version, which it will!

Had a great time this weekend with a user-made module. Came into a room and realized

Its DnD moments like these that Solasta captures so well. I was way outnumbered, but I could completely take off the gloves and let the mana fly. I think I dropped 4x fireballs, hold person, Paladin and Cleric smiting, some Witch hexes (from the CE mod, the Witch class is pretty cool), etc. Tough battle but we won.

That said looking at starting a different user-made module with a group tonight. Any suggestions? @Mark_Crump would you recommend the one you mentioned? 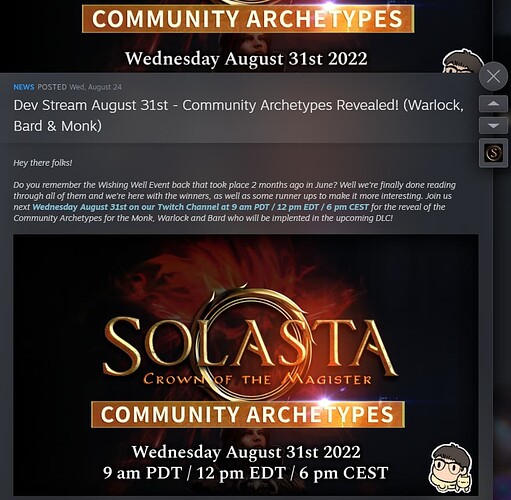 Excellent!, I’m ready for those to be official classes.

I’ve started Against the Giants. The design and battles so far are good, but the author had zero dialog and such. On the other hand also started Into the Mysts, and the author has done a great job with both design and scripting. For example the first area is a haunted mansion, and the author added lots of scripted effects to make it as spooky as possible. My son and I are playing it together multiplayer.

I have been playing Pathfinder-Kingmaker lately, but the huge amount of options is just too much for me, so I was looking into Solasta as an alternative (not in the least because it’s on sale on Steam at the moment). Should I switch and try Solasta? Also: it’s just the base game on sale. Does it need the DLC?

Edit: reading a few of the comments above, I fear this game will have me as stumped as Pathfinder… My last real experience with D&D rules was about 20 years ago, and I think I just don’t have the energy to learn the new ones and optimize my characters to accommodate those rules.

Back to Divinity I guess. Or Baldurs Gate, again.

Solasta is far simpler than Pathfinder IMO. You only have the base classes, and you cannot multiclass. There are far fewer subclasses and such. The difficulty level (assuming you have not cranked it up) is such that you can do fine with non-optimized choices anyway…

The base game has the initial campaign. Its not a grand opus, but in my opinion more like what you’d see in a tabletop game. The focus is firmly on the 3d map…exploring it and having turn-based battles in 3D. I’d say that is the games strength, and it leans into it.

One DLC adds Barbarians and Druids. You do not need them, but they are good flavor. The base classes are actually better. A 2nd DLC adds a 2nd campaign. Most people feel its a bit better than the first, but again its not a grand opus. Its fine.

5e does have some things that are different, like short rests and such. But given you do not need to min-max to play, its fine. I’m still learning.

Also even in the battles Solasta is less complex that Kingmaker.

As the PCs only have a single class, they do not have near as many option in a battle (but they do have meaningful options). The casters have of course more options than the fighters/rogues due to spells, but through experience you’ll learn what works for you.

Solasta also does not have as many bad guys with gotchas…without giving spoilers I’m thinking of some of the infamous Kingmaker battles where if you know what is coming the encounter is easy, but otherwise its pretty much impossible.

Thanks for the info, I’ll give it some thought!

I’m thinking of some of the infamous Kingmaker battles where if you know what is coming the encounter is easy, but otherwise its pretty much impossible.

Yeah, one of the first battles in the open world involved some spider swarms, which simply killed my whole party. Wasn’t happy about that. No idea what is yet to come…

You can customize the shit out of the difficulty/game mechanics in Solasta. There is NO way to get stuck or make bad choices really, either. Just think logically when you level up, don’t give a character with a two handed sword the Ambidextrous feat, for example. I mean, unless you are wanting to switch gears with him I suppose.

There are lots of Solasta videos out there, just watch one and get a feel for the gameplay, that should help you figure out if it’s for you. I even made one, if you want I can go fetch a link for you.

Yeah, as i said infamous. I think I died a couple of times in that one myself.

I’ve not seen that in Solasta. The only sorta gotcha is Solasta enforces rules strictly. Examples

This works on the Steam Deck - though it’s entirely mouse driven, but since you can map keystrokes to buttons, I set up the shoulder buttons to rotate the camera (for example) and I could probably do more, like set up the A button to simulate a left click. Once this game gets official controller support it will probably feel a lot better, but thanks to the customization options in the Steam Deck itself, it’s very playable. 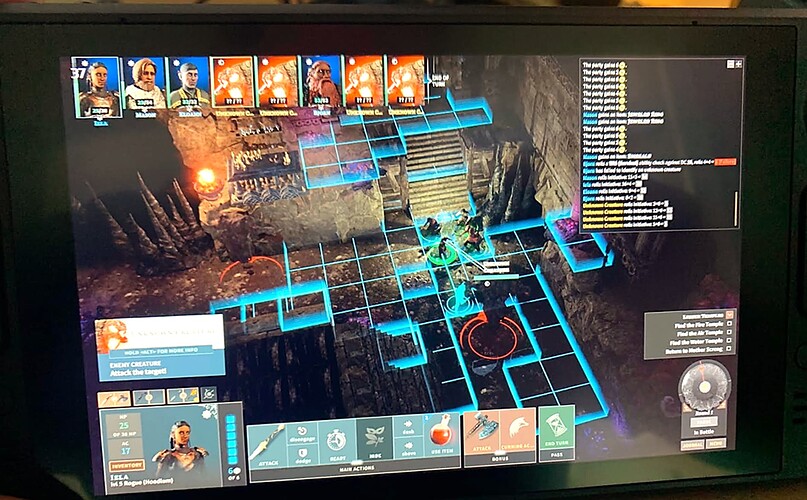