When I see someone misspell Derek Smart’s name twice in the thumbnail, I wonder how good their research could possibly be?

He didn’t even spell correctly the name of the thing you erect over an oil well! 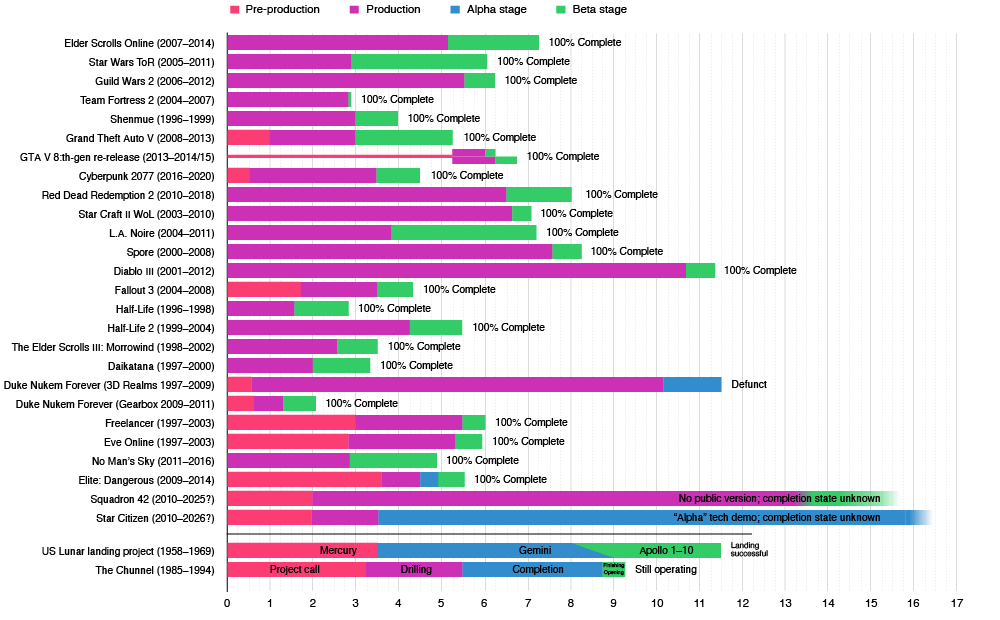 …and I had nothing to do with that.

However, I am pleased Derpspace is not.

Yeah, but I think they were going for more famous games there, not infamous disasters.

ps. BC3K took 8 yrs to make, and with a skeleton crew of indie misfits led by yours truly.

While that video hasn’t changed my lack of inclination to fund kickstarters, I do now want one of those astronaut hats.

And it was a fucking glorious mess of ambitious bugs and dreams and let nobody ever tell you different sir!

Yeah, but I think they were going for more famous games there, not infamous disasters.

ps. BC3K took 8 yrs to make, and with a skeleton crew of indie misfits led by yours truly.

So I took a little trip down the Star Citizen rabbit hole this weekend. I’m not interested in contributing to the madness financially, but I watched a bunch of livestreams, and I have to say that what is there now is pretty damned impressive.

Now it shouldn’t have taken as much time and money as it has to get here, but what I saw is a pretty cool little space-sim sandbox, though obviously still early and with lots of bugs.

I watched a group of seven or eight people land three big, very cool-looking ships on a random planet and offload various types of vehicles. It was daytime when they landed, and it took some doing to make sure everyone was where they needed to be and all the vehicles got out of the ships safely. In the mean time, one of the ships hilariously exploded for no apparent reason, which caused another delay.

But once they started going, it was really cool to watch. Like I said, they laded during day time, but by the time they started exploring this planet it was night. And they started in a bit of a lowland area in a field of flowers, but as they progressed higher in elevation, snow appeared and then they found themselves enveloped in a pretty serious snowstorm. Visibility was very limited, and their visors in first-person kept fogging up. One guy had voice commands on so you could hear him say “wipe visor” every 10 seconds or so.

This group rode around in four vehicles - one six-wheeled, two hover-bike type things, and one very small aerial vehicle just exploring and having fun. One big problem is there doesn’t appear to be a way to flip ground vehicles back right-side up if they tip, and they tipped over a LOT, so there was a fair amount of time spent ramming other vehicles into the tipped-over vehicle to get it righted. That wasn’t fun to watch, but they seemed to enjoy it.

Then they headed back to their ships and meanwhile another friend had landed a big fancy ship called a Carrack (I think that’s how it’s spelled) so they spent some time exploring it. I will give the devs some credit: their ship designs are absolutely amazing. There is an insane level of detail going on there, and I found myself watching a bunch of YouTube ship tours afterwards.

There is something here. It may take another 10 years and $400 million to get there, but I understand the people who play the game a little bit more now.

One thing I think could take the game to the next level is base building, ala Subnautica. Not sure if the idea is that there will be a viable gameplay path in setting up a big mining operation on a specific planet, but as this crew was driving around on this random planet it felt like having an HQ to return to would help fulfil the fantasy even more.

Anyway, I’m not interested in paying for any of this, and I have a feeling my 5-year-old PC wouldn’t play it well anyway, but I’ve got my eyes on you now, Star Citizen.

As someone who’s played it lightly with a friend, sure, this looks impressive at first. but it’s hollow. those players had nothing to do on that planet and nowhere to go. There were no interesting missions or decisions to make. All you can do on a planet is land and grab materials, or go into a cave to do really boring mining. It’s a sandbox in the truest sense of the word. It’s visually impressive (when it works and doesn’t glitch out, and only on very high end machine). To buy any of these ships, you have to grind extremely repetitive, simple, and boring missions that are extremely unengaging, or spend hundreds of dollars. The carrack, for example, costs over 700 dollars, and there is little to no actual crew interaction or multiplayer involvement. the pilot steers the ship and thats about it. the rest of it is “planned” for the future

you should try it out during a free fleet week. the only thing it has going for it is that the ships are kinda fun to control and feel interesting. but I think you’ll see what I mean, that the actual game itself is empty. it feels like a empty shell

One of the big and obvious dangers of really long game development, especially with games that heavily rely on graphics, is that by the time you get done, your engine is outdated. After watching the new Unreal 5 thing, we’ve already reached that point with SC. They are at best years away from this thing, and it’s already obsolete, I can only imagine how bad it’s going to appear if/when they ever do “finish” it.

one of the ships hilariously exploded for no apparent reason

This made me laugh a lot more than you probably intended. I blame the lack of coffee.

I’m remember feeling bad about liking comic books and D&D back in the day, when geek interests were not exactly supported. I would hate to think that I have become the enemy.

C’mon. Nerds have always been a balkanized, cannibalistic lot. Its the natural way of things, the cascade of wedgies.

Serious wargamers shit on silly fantasy role players, who in turn look down on magic and other card gamers, while everyone chuckles at Larpers.

PC Gamers look down on XBOX/PS console plebs, XBOX/PS look down on Nintendo-kids, while everyone chuckles at Larpers.

But don’t feel sorry for Larpers, because they get to at least look down on furries, who can in turn feel superior to Otherkin.

while everyone chuckles at Larpers.

One guy had voice commands on so you could hear him say “wipe visor” every 10 seconds or so.

Imagine if you had to do this with your car.

HEMA look down on HMB

It’s true, I have done Italian longsword and I hate β-Hydroxy β-methylbutyric acid.

Imagine if you had to do this with your car.

At this point most mid-to-high-end cars have voice control as an option, just like this is in Star Citizen.

Do you have to tell them to wipe the windshield every ten seconds, or can you just turn it on and let it go like every single car I’ve ever driven?

This seems like a weird thing to nitpick about the game. I don’t really want to defend it because they don’t need it and as I noted I’m not going to pay money to play it, but the voice command causes your actual avatar’s hand to wipe the visor you’re physically wearing in the game. It’s not a windshield wiper.

Think someone riding a motorcycle.