Anybody catch this on TNT Sunday night?

Neat premise, even if global pandemic is one of the storytelling “flavors of the week.” For obvious reasons, the show feels a lot like a low-tech Star Trek, particularly Enterprise and Voyager.

Great action sequences. I especially liked the confrontation with the Russians in the Arctic Circle. I also thought that they had a lot of neat combat and readiness montages, especially when the ship “buttoned up” in preparation for the nuclear detonation in France.

I did count several minor plot holes, in particular the ship’s appearance in the Mediterranean after a mission in the Arctic Ocean. The pilot also failed to clearly identify the cast. Only the captain, the XO, the virologist, and the CMC really stood out.

I will watch again. I hope that they take on Marines at Gitmo.

Is this based on the book? Although I think in that it was a nuclear war, not a pandemic.

I like the massive pandemic setting. I like that the US government becomes the Speaker of the House in a bunker, and then probably nothing. I liked the Cruise Ship of Death, though I was wondering for a while where all the people were. That a crew member would lose his helmet and get exposed was completely predictable, but not so bad.

I liked them witnessing a nuclear attack, though we don’t know the motivation behind that one yet.

It’s good to see Adam Baldwin again. He’ll always be Jayne to me, but he’s fun to watch.

However, it is a Michael Bay production, so The Last Ship had lots of stupid in it.

For example, if you’re a rogue Russian military squad out to capture The Cure, maybe, just maybe, shooting at the people who know how to make the cure is a wee bit counterproductive. By which I mean the scientists collecting the vital data, not the crew of the destroyer in general. And since we’ve established that it was a 24-grade mole who tipped them off, they should have known full well that they’re still working on The Cure, weren’t remotely close, and that interrupting them was not a good idea.

It was a bit much that 3-4 Navy types on snowmobiles could defeat a much larger force with attack helicopters. The Russian troops clearly went to Stormtrooper marksmanship school.

“Radio Silence” does not mean “we cannot receive anything.” It means you don’t transmit. Keeping the DD’s crew in the dark that way served no purpose, but more significantly, there’s no way they could have sold “don’t listen to any broadcasts” to the captain in any plausible way.

Holding a fuse in by brute force does not prevent the fuse from blowing. It doesn’t help a damned thing, actually. If the fuse is blowing, there’s a reason it’s blowing. Fuses are sacrificial parts meant to prevent more serious damage. If you defeat the fuse, you’re probably causing an electrical fire instead. The circuit doesn’t “get better” once things start again.

“We needed the primordial virus” is of course bullshit. Not the dumbest science-related thing you see in most TV SF, but dumb.

The unnecessary conflict between the captain and the XO was predictable, but also annoying because the XO’s position is too obviously idiocy. That part reminded me uncomfortably of Last Resort, that show about the SSBN going rogue that was much dumber than it needed to be. Though in that case, it was generally the captain with the dumb position, not the XO.

I agree that most of those points were pretty… questionable, especially the fuse scene, but i still liked it a lot.

I remember thinking they really lucked out by seemingly making the russians (one of) the bad guys in this with current real world events.

I personally got a kick out of the Russians operating American helicopters. Putting a star on the side of a Pave Low isn’t quite good enough, guys. 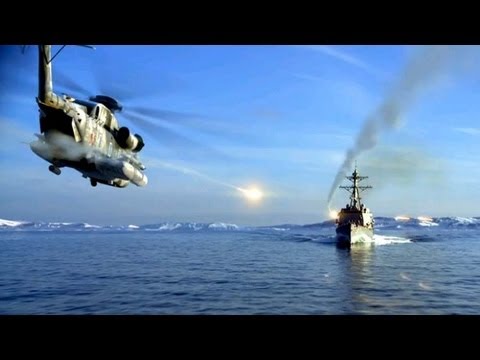 I’m just terribly allergic to stupid, particularly unnecessary stupid. I think they could have easily covered the same major plot points without resorting to stupid.

Global pandemic is fine. I’m not quite sure how they could sell the “we must go to the arctic for the cure” angle, I admit. I thought at first they’d be looking for samples of the 1918 Spanish Flu for some reason - I think I read a pandemic novel at some point which used that as a premise.

Aside from that, though, cut the unneeded secrecy. It’s not required for plot tension. The Captain could be in on it from the start, no reason to keep him in the dark. Lots and lots of room for conflict just from the global death scenario. The Russian helicopters can attack the ship without shooting at the doctors they know are vital to keep alive. Come in, drop some troops who intend to capture the doctors, not kill them. Firefight against the Marines can then ensue.

We have some very intelligent shows on TV these days. OK, cable TV, but TV.

I tried to watch this, I thought it was terrible. Just…bad all around, nothing redeeming about it except the premise which they fail to execute on at any level. I won’t be watching it again.

I personally got a kick out of the Russians operating American helicopters. Putting a star on the side of a Pave Low isn’t quite good enough, guys.

I don’t even know why they bothered with the Pave Low? It’s obvious they’re using CG for those scenes. Would it kill their artists to crack open “Jane’s Russian Helicopters”???

In the book I think the ship was a nuclear cruiser, so they never needed to refuel. How do they explain the DD never needing a resupply?

In the book I think the ship was a nuclear cruiser, so they never needed to refuel. How do they explain the DD never needing a resupply?

The show prompted me to check out the book on Amazon. There, it’s a nuclear war, not a pandemic, which simplifies some of the problems. Being in the arctic in the book is just happenstance, not some dopey “primordial virus” bafflegab. However, the user reviews of the book are pretty scathing. Badly written, and weird depictions of women.

The show prompted me to check out the book on Amazon. There, it’s a nuclear war, not a pandemic, which simplifies some of the problems. Being in the arctic in the book is just happenstance, not some dopey “primordial virus” bafflegab. However, the user reviews of the book are pretty scathing. Badly written, and weird depictions of women.

The book was written back around the Cold War; I read it back then.

In regards to the female characters

As there is a severe inbalance of male to female sailors, each female sailor takes on something like a dozen “husbands” who she basically services with sex. In order to keep order and prevent fighting over them. Yeah.

Global pandemic is fine. I’m not quite sure how they could sell the “we must go to the arctic for the cure” angle, I admit. I thought at first they’d be looking for samples of the 1918 Spanish Flu for some reason - I think I read a pandemic novel at some point which used that as a premise.

May be The Culling which this show made me think of that book as well.

This was brilliant. The laughs didn’t stop coming.

Scientist is doing some digging at a random spot on the ice which is the right piece of ice for some unknown reason.
Russian helicopters are chasing dudes on ski bike things and missing every shot.
American helicopters and soldiers eventually get their shit into gear and take the russians out in no time flat.

Picture of someone over video chat.
“Communication is spotty”
Picture suddenly gets tearing as spotty communication effect is cued.

It just hits the right notes at the right times for it to feel contrived.

Don’t people have any shame? I think this series has promise despite the sloppy writing and direction.

I got the impression that the Russians were trying to keep the Americans’ heads-down or else corral them. From the start, it didn’t seem that they were shooting to kill. My impression may not have been accurate, but it probably spared me a degree of frustration.

The ship does not have Marines abroad. It does have a SEAL time. I do wish that they’d outfitted the mission more appropriately. At least on Enterprise, there was intentional preparation to enter the Delphic Expanse.

This was really good, can’t wait for episode 2. I almost wish there was a whole episode just on the cruise ship, there had to be more than 1 person alive there.

Well…good? The writing was alternately bad, sloppy, or predictable. Maybe not full Under the Dome dumb, but it’s worrisome. Lots of effort put into the action scenes, maybe it will find its sea legs…but I suspect this one will torpedo itself pretty much like that sub one did.

Well it is summer tv, and I’d rather watch this than a reality show. :)

I really liked the sub show last year too.

In all fairness, Last Resort had a really untenable premise. Refuse a nuclear missile fire order because it’s hinkey? Sure. Other US ships shoot at our SSBN? NO. Sub commander takes over an island, and resorts to nuclear blackmail against the US? OH HELL NO. Any reasonable treatment of the basic idea would have resolved itself much more reasonably in the first hour or two.

The Last Ship does remind me of Last Resort, and I think it’s pretty clear it’s going to go from bad to worse. The problem this time, though, isn’t the basic premise, but just bad writing by unimaginative writers.

You guys should read the book. It’s really good.