The East India Company rose from an obscure trading post to become the most powerful force in India over the course of a century and a half. As one of the leading families holding shares in the Company, you will strive to a̶d̶v̶a̶n̶c̶e̶ ̶t̶h̶e̶ ̶g̶r̶e̶a̶t̶e̶r̶ ̶g̶o̶o̶d̶ ̶o̶f̶ ̶t̶h̶e̶ ̶C̶o̶m̶p̶a̶n̶y̶ ̶a̶n̶d̶ ̶t̶h̶e̶ ̶E̶m̶p̶i̶r̶e̶ get jobs for your worthless nephews so they can buy fancy hats. Your pieces represent members of your family, and they can be put in various Company offices. They don’t score, however, until they retire, and then you can buy them various status symbols from your precious precious family treasury. Only one family can win! Also, there’s a chance that India could revolt and collapse, in which case the people in charge lose most of their stuff.

We’ll be playing the 6 turn Campaign Scenario.
The player colors, the turn order/table seating, and the families they will be playing:

@Diddums - Green - the Sykes Family-At the start of the Trade phase, if you have at least 2 cubes in the Writers Box, gain $1

@Kolbex -Orange-the Paxton Family-At the start of the Trade Phase, for every two ships that have captains, gain $1

@rho21 -Purple-the Hastings Family-when taking any blue Company Action, roll one additional die for free. (Must have at least one die to get the bonus die) 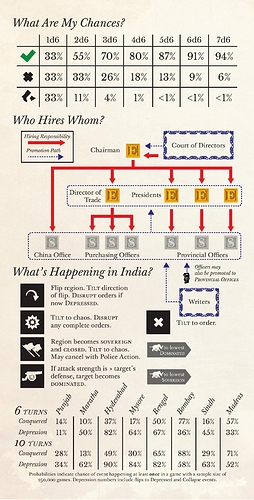 My only qualification is having read all the Allan Mallinson books. I am in if you will have me.

(Ooh, and also all the Flashman books, although the Company is far less prominent in those)

Let’s take a look at the rules, shall we? Full rules here: https://tesera.ru/images/items/1283895/John_Company_FINAL_Rules_(with_bleed).pdf

Here’s the board. See the pretty red path, starting from the bottom left and working counter-clockwise? That’s the order each Company Office operates in. At the beginning of each turn, the Chairman allocates money to the different offices-ship purchasing, goods purchasing, and military spending. The purchasing officers must spend all the money allocated, but they get to decide whose shipyards and whose factories get the contracts each turn.
Offices:
A. Chairman. Elected by the shareholders. Allocates the Company’s money each turn, and appoints and promotes Executive officers. Being the Chairman is good!

The above are all Senior Offices. The Executive positions are promoted from there. Below are all the Executive Offices. There’s several differences, but mainly in what kind of victory point rewards the holder is entitled to on retirement.

Each turn has four phases. The Family Phase is first. Each family can take one family action. There are 7 options.

3 and 4, collectively, give their owners more votes in Parliament if a Parliamentary Issue comes up during the Event Phase. We’ll cross that London Bridge when we come to it.

Note that 6 and 7 have a one-turn delay between placing the cubes and them being activated, due to Rules Complications.

(This seems like a LOT, but at any given moment, you only have to be thinking about a little bit of it-what is your office going to do, mainly)

@Cuthbert, you are my hero for doing this. I thought about it last year but couldn’t work up the energy to maintain the board state after Founding Fathers.

I am very excited to play!

I would like more hats for my nephews. I’m in.

Also, there is a Vassal module posted at the bottom of this thread:
https://boardgamegeek.com/thread/1810418/vassal-module#

There’s also a tabletop simulator module if you want a way of generating pretty screenshots. Not convinced it’ll be better than photography though.

Now, I’ve read the rules (skipped over Phil’s essay on how taxation is theft), watched a pretty terrible rules overview video, and then watched the pretty good first hour of the Heavy Cardboard playthrough with special guest Cole Wehrle. I feel like I’ve got a handle on the rules at least, if not strategy.

The player colors, the turn order/table seating, and the families they will be playing:

@Diddums - Green - the Sykes Family-At the start of the Trade phase, if you have at least 2 cubes in the Writers Box, gain $1

@Kolbex -Orange-the Paxton Family-At the start of the Trade Phase, for every two ships that have captains, gain $1

@rho21 -Purple-the Hastings Family-when taking any blue Company Action, roll one additional die for free. (Must have at least one die to get the bonus die)

Each of you starts with 5 starting cubes and 12 in reserve, as well as five dollars.

I’ll be trying to do this through Vassal now, so you’re all spared my beautiful photography

The Company Phase:
A $5 loan, which will cost $1 in interest per turn for the rest of the game, may be taken by the Chairman once at any point in the Company Phase.

Vacancies are filled, either by the Chairman or by the Director of Trade, respectively. This implicates a very important rule, THE NEPOTISM RULE

Nepotism. When filling any office, except the Chairman, players are penalized for Nepotism. If a player promotes their own cube over another player’s
cube, the promoting player must give one of their cubes from their stock as
a promise to every player with at least one eligible candidate.

Giving another player a cube is basically an IOU. It can be redeemed at any time by paying the player holding the promise $2, promoting them over another player, or by mutual agreement. Each cube held by another player is -2 VP at the end of the game, so try and get them back.

The Purchasing Offices each act, spending the money allocated by the Chairman. Then the Directors of Trade and Military Affairs allocate boats, guns, and officers to the various Presidencies. Then, following the red path counterclockwise, the Presidencies take actions. Each President can do multiple actions, as long as there’s money in their treasury, but they must be done in the following order.

Blue actions require a Check
to see if the action is successful. To perform this
Check, a player rolls as many dice as the “strength” of the action minus any
penalty (penalties are described in each individual action). Of the dice that
are rolled, only the lowest die counts. A roll of 1 or 2 is a success. A roll of 3 or
4 has no effect. A roll of 5 or 6 is a failure, and the officeholder is immediately returned to that player’s stock of unused pieces. A vacated office has
no further opportunities to act this game turn. Any blue action may be taken
more than once as long as the Check has not failed.

At this point I suggest we get started, and we can deal with the Events phase as we come to it. Is that agreeable to everyone? I suggest everyone read the rules and ask me any questions they may have-there’s no hidden information in this game so feel free to think out loud.

How are you planning to do this evenly? The rules suggest simulating the snake draft for a first play by handing out offices down the ribbon as if picked that way. If you’re doing something along those lines, I’m fine with it.

Yes, that was the plan.

Let’s get started! Look upon my (cheaper) Manors, ye mighty, and despair.

Now, I’ve read the rules (skipped over Phil’s essay on how taxation is theft)

Hahaha, I did the same. Guy is a pretty brilliant game designer but man those rules essays…

The Sykes are ready! I like that they are (what would appear to be) clerks with delusions of grandeur; this will be very easy to simulate.

The Larkin family members are born ready to rise in this venture. 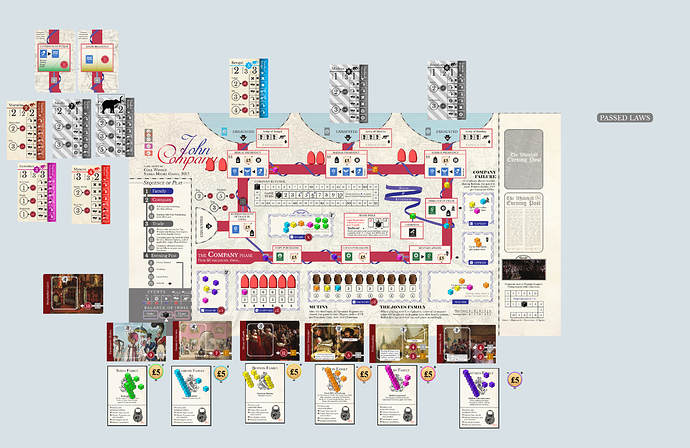 @Diddums managed to roll all stock shares for his starting assets. Sykes will be controlling the Chairmanship for quite a while, unless people buy in to stop them. On the other hand, they have no opportunities to gain any other positions at the moment.

@Lantz is President of Bengal, which is the main way the Company makes money in the early game. Try not to screw it up too badly! He’s also the only one with a shipyard, for now. Someone else might want to either open a competing one or buy into his Remember, the purchasing officers have to buy the cheapest ship or ships, and shipyards owned by players are cheaper!

@rho21 is the most gifted administrator of the bunch, and the only one who won’t get to roll dice this turn. You may want to remedy that when a position comes open. Rho also starts with six victory points due to Manors, so a quick company collapse, ending the game, might give him the win.

Give the prize cards a good look. Some can only be purchased by retiring Executives, others by only Senior Officers, and some by both. The Investment Bank might be a good early game target, and the House of Lords is a juicy reward for a family that has saved up some money.

As there were five additional cubes randomly placed in the Court of Directors, chairman @Diddums has 20 pounds to allocate among the office treasuries. @Diddums gets to act first in the Family phase also, so feel free to do both. If you would rather wait for the no-doubt useful and selfless advice of the Company’s officers, please do so as well!

Worth noting that Punjab is dominant over Sindh and Maratha. Hyderabad and Mysore are sovereign.

Can I suggest to the chairman that the key to the Company’s fortunes lies in trade with the subcontinent. To that end, we will need ships and goods. As the Director of Trade, I suggest allocating hefty sums to both.