Yeah, just posted elsewhere, I try to play every open world game, wanted to love Watch Dogs 2, played a lot of it, but I got frustrated at what came across to me as contrived timed puzzles that didn’t feel really like they advanced the story as much as they just threw them in. It’s the only open world game I’ve played in a long time that I never finished.

Hey y’all! I just remembered I had this in my library, so I began playing it, and it’s so different from other open world games that want you to shoot/kill everything. So far I love listening in on people’s conversations, and taking money from that pharmaceutical guy for that rap song was hilarious. Nice version of San Fran too, also love one of the apps is called Driver, as I loved Driver: San Francisco.

Question though, is there a place that explains what some of the hacking icons do? The tutorial went by so fast I forget which, say, sets something to be an explosive and so on.

Next game leaked as Watch Dogs: Legion. Set in London, with some ability to play as the London NPCs, maybe a bit like Nomad Soul.

Bought it last week on a steam discount. Fun game! Quite punk too, i like that. Also can be played pretty nicely, i only use a taser, never guns.

On the other hand my phone is a weapon of motherfucking mass destruction man! Horrible traffic accidents, three-way gang wars that also involve the cops, all kinds of chaos. Such fun.

I’m playing this on PC. Can someone enlighten me on how to use the Song Sneak phone app in the game? All the instructions talk about hitting the touch pad of the PS4 controller but I’m playing on PC so that doesn’t help me.

EDIT: D’oh, never mind, I figured it out. You hit the back button on the controller (the one to the left of the X on the Xbox One controller).

Be sure to get the freeLC high res pack. Its sweet!

Be sure to get the freeLC high res pack. Its sweet!

Yup, looks like I got it. I don’t recall specifically downloading it or installing it, though.

Was talking with McMaster the other night during one of his twitch streams, asking what open world game I should give a go next. My last was AC Odyssey, so I checked the backlog and the big three I had waiting for me was Watch Dogs 2, Mafia 3 and Middle-earth: Shadow of War. He said this was probably the best of the three games.

So far things I reallllly like:
Personality of everyone is dialed up like 1000% from WD1.
Is he using a yo-yo as a melee weapon? If so its awesome!
Taser!
Fast travel unlocked from the start!
Better driving and general player movement from WD1.

Not far in the game yet, currently doing a mission with a talking car.

I absolutely loved Mafia III. Bought all the DLC right up front. The mood, the story telling, just loved it. I never played Mafia I or II, FWIW.

I liked WD2 for a while, but I got tired of some of the required puzzles that made me go online to find solutions. And I gave up when I was in a big room where I had to solve the puzzles before it exploded, and I ran from place to place trying to hit switches, etc. and got blown up, over and over and over. It had no purpose other than providing a hard puzzle. I eventually gave up and deleted the game off my PS4 HD.

I loved both WD2 and Maffia III

WD2 is fun but I enjoyed atmosphere/story and gameplay of Mafia 3 vastly more. But it needed to be patched to get that stage. If you play it, get the DLCs too, thy are great.

How does the scout x thing work? I am trying to take a selfie for more followers at Alcatraz but it doesn’t seem to register and I am near the front door with the government seal above it.

It’s been a while. You’re sure you’re taking the picture of the landmark the game intends? Also, sometimes a particular person has to be in the shot, and it’ll tell you so.

Did you try taking the picture from far enough away to capture more of it, maybe?

I eventually figured it out, its all about getting enough of the subject into the photo.

Finished up the church missions, and am about half way through the street art and atm missions, what a fun game!

Really enjoying the climbing puzzles, reminds me of the ubi games of old .

Finished up the street art/spray paint mission. Also just went to a weird party at the beach at night. Scout X needs to be in every game goin forward, gain xp, see the cool sights in game, snag easy screenshots. Story spoilers: Saved The Fox tonight and also met up with T-Bone! :D

This made me chuckle as I was in the middle of a mission. 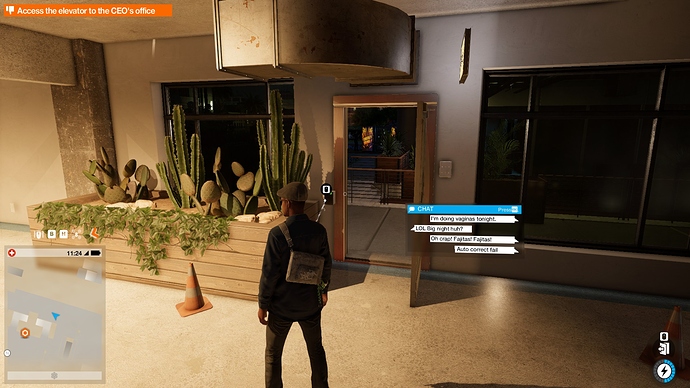 This game really is a huge improvement over Watch Dogs 1.
Also is it just how I am playing or does money seem pretty useless?

I found money a useless number about halfway through too yeah.

Oh hey, I was doing a ScoutX location and someone nearby in the shot made comments and photo bombed me!

54% so far , around 25 hrs in. The game really upped the difficulty with FBI missions.

Overall this little guy is the mvp of the game. 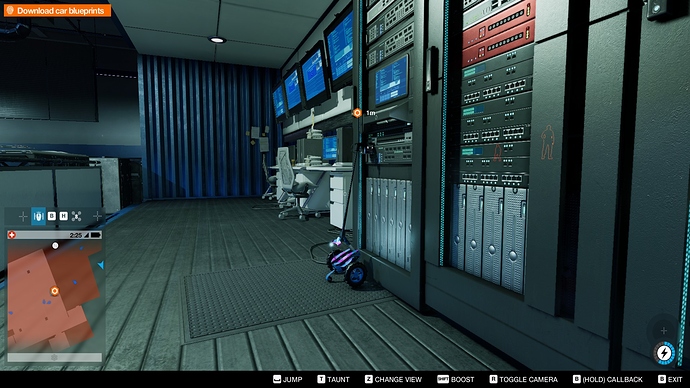 The default control mapping on PC is atrocious. Drone and RC car are used so often it should be mapped somewhere close to wasd. In the end I map to c and z respectively.

I finished it a few months ago. Unless they improve dramatically with Watch Dog Legion I have to give it a pass. The story is interesting but the gameplay is just meh, very repetitive by the end.

The default control mapping is not to use a keyboard.