On another note, I think all the time acceleration grinding in FSEconomy has broken some aspects of the sim for me. I had to do 80 miles in the C172 at normal speed the other day and it nearly killed me.

Do you fly with autopilot? Try turning it off and hand-flying if so. That helps keep you occupied on longer flights :) Also VOR to VOR rather than GPS direct.

Absolutely, this. I just flew in the official community fly-in; 112nm in a Cessna 152, hand flying all the way. It was lots of fun. :)

I was hand-flying because I wanted to time it for a potential bush trip leg to see if it was too long (it was too long, but the very boring scenery also contributed to that).

Not to worry guys, it’s just a matter of recalibrating. More vfr flying and less FSE will help.

I finished, I think it was the 6th leg of the Breckenridge Bush Trip last night. I was approaching the runway on the first try and the screen suddenly went black and it said I overstressed the aircraft which was really weird. I wasn’t doing anything stress worthy as far as I know. Maybe I was trying to drop my altitude too fast? My speedometer wasn’t stressing out or anything.

Anyway, on the second run I stayed lower to the ground the whole way, and then I landed put my nose into the ground. D’oh! I guess I was coming in with too much speed. On the third try, I made sure to bleed all my speed in the air first, so by the time I landed, I could pull back on the stick and I came to stop pretty quickly.

Oh by the way @Pedro, your trick of changing the left and right triggers to Rudder Axis instead of Rudder works wonderfully. It’s easy to turn left and right now using the rudder while on the runway.

By the way, I’ve seen part of this trip in real life, I’m now realizing. I think it’s the third leg on which you fly over the town of Lone Pine. In 2011, I went to Yosemite, and the plan was to spend a day there, and then on the second day, drive through Yosemite and exit from the East side of the park, and then go to Mono Lake, and then drive South to Lone Pine and spend a night there while looking at Mt. Whitney, which is just West of Lone Pine. And then go through Death Valley the new morning and get to Vegas.

Anyway, plans changed slightly, and we spent two days at Yosemite, and cancelled the stay at Lone Pine. I still went to Mono Lake on the third day and then drove South through Lone Pine and went through Death Valley and made it to Vegas without stopping at Lone Pine. Nevertheless, I still remember that, driving through that huge desert Valley, and looking upon Mt. Whitney at Lone Pine before turning East toward Death Valley.

It’s just that I didn’t connect that with this Bush Trip in my head until I realized how close I was flying to Mono Lake on Leg 4.

Has anyone here been to Mono Lake? I still get creeped out just thinking about it. I’ve never seen that kind of life and those creatures on this Earth before or since.

Has anyone here been to Mono Lake? I still get creeped out just thinking about it. I’ve never seen that kind of life and those creatures on this Earth before or since.

I was just there a couple of months ago 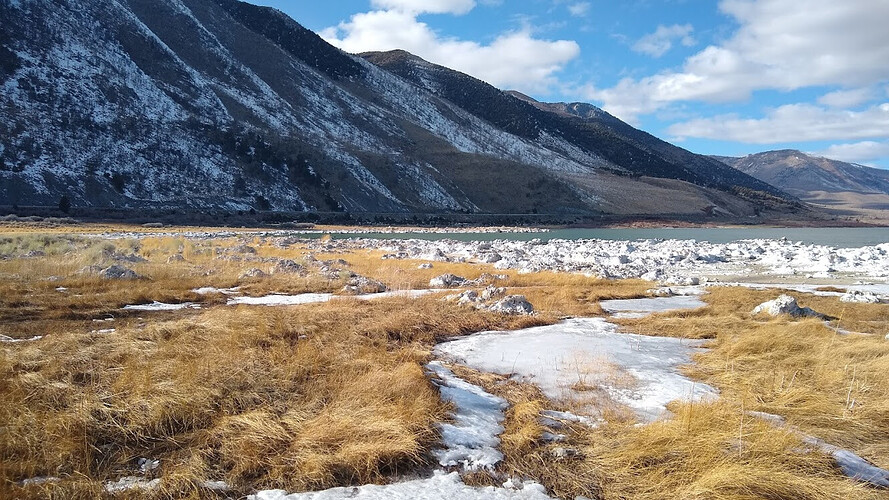 That’s not snow on the beach; it’s “stufas”… salt sculptures created by the lake’s unique chemsitry 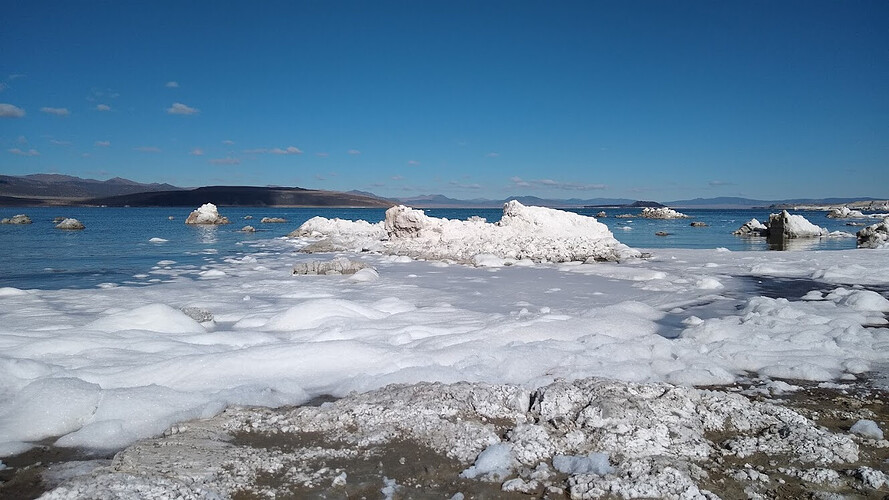 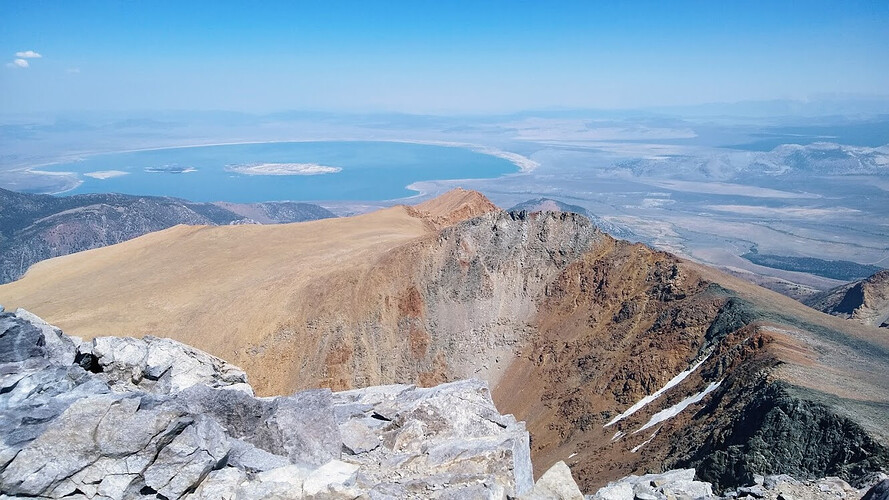 That east side of Yosemite is so amazing. I had no idea when I was planning my trip. You always hear about Yosemite valley and El Capitan, but hardly anyone talks about the East side and the amazing descent there.

I made it as far as Tuolumne Meadows coming from the west; I’m kicking myself having done this bush trip that I didn’t press on further, but I had to be somewhere the next day, I think.

Did a nice extended flight over Argentina today in the Corsair, ended up at SANU. It’s tricky to get trimmed out, but once I did I settled into a nice sedate cruise at 23000 doing about 320 over the ground and only burning 80ish gph. 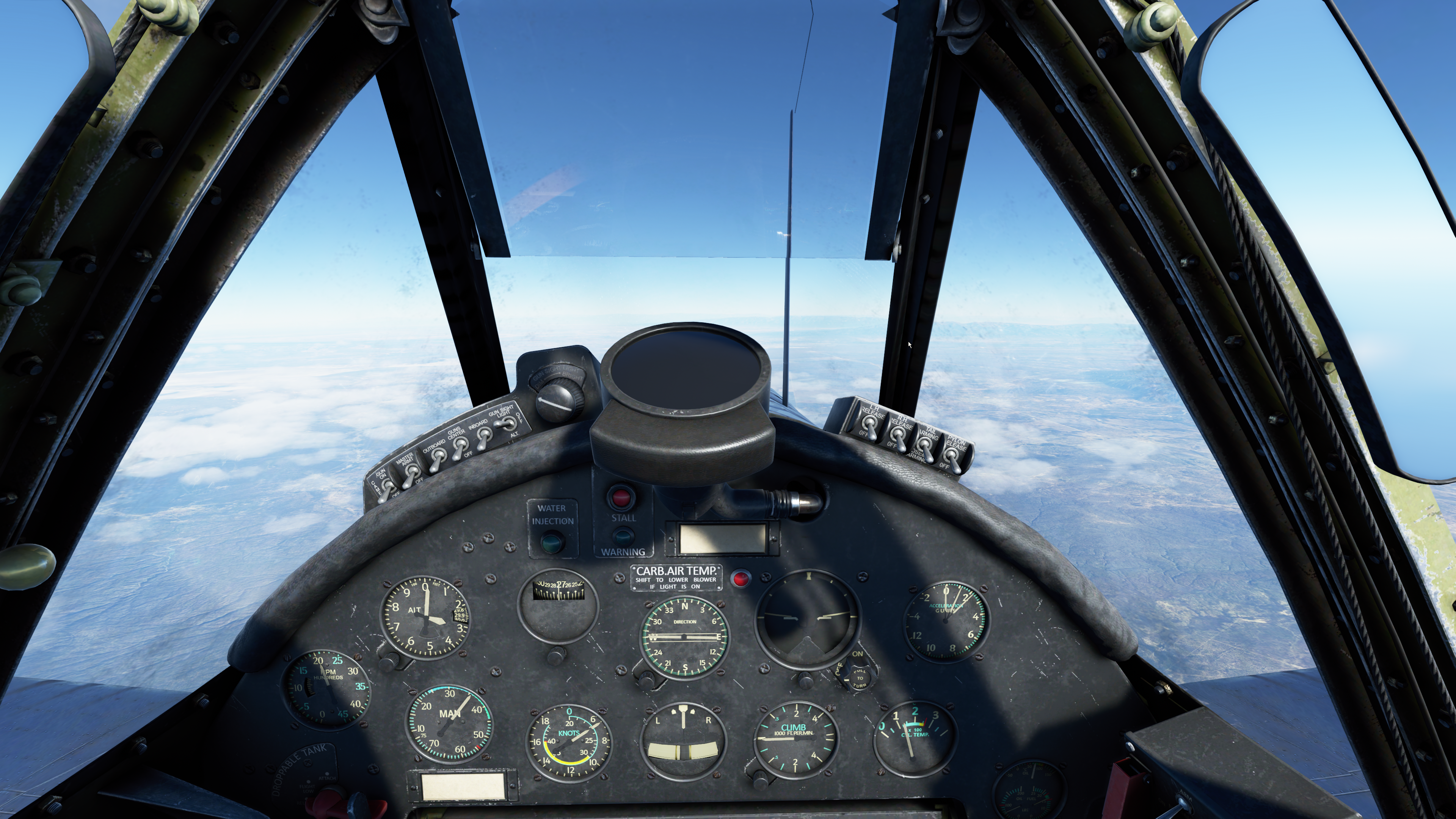 I think this is the Pampas? Not sure, but it looks kinda neat. 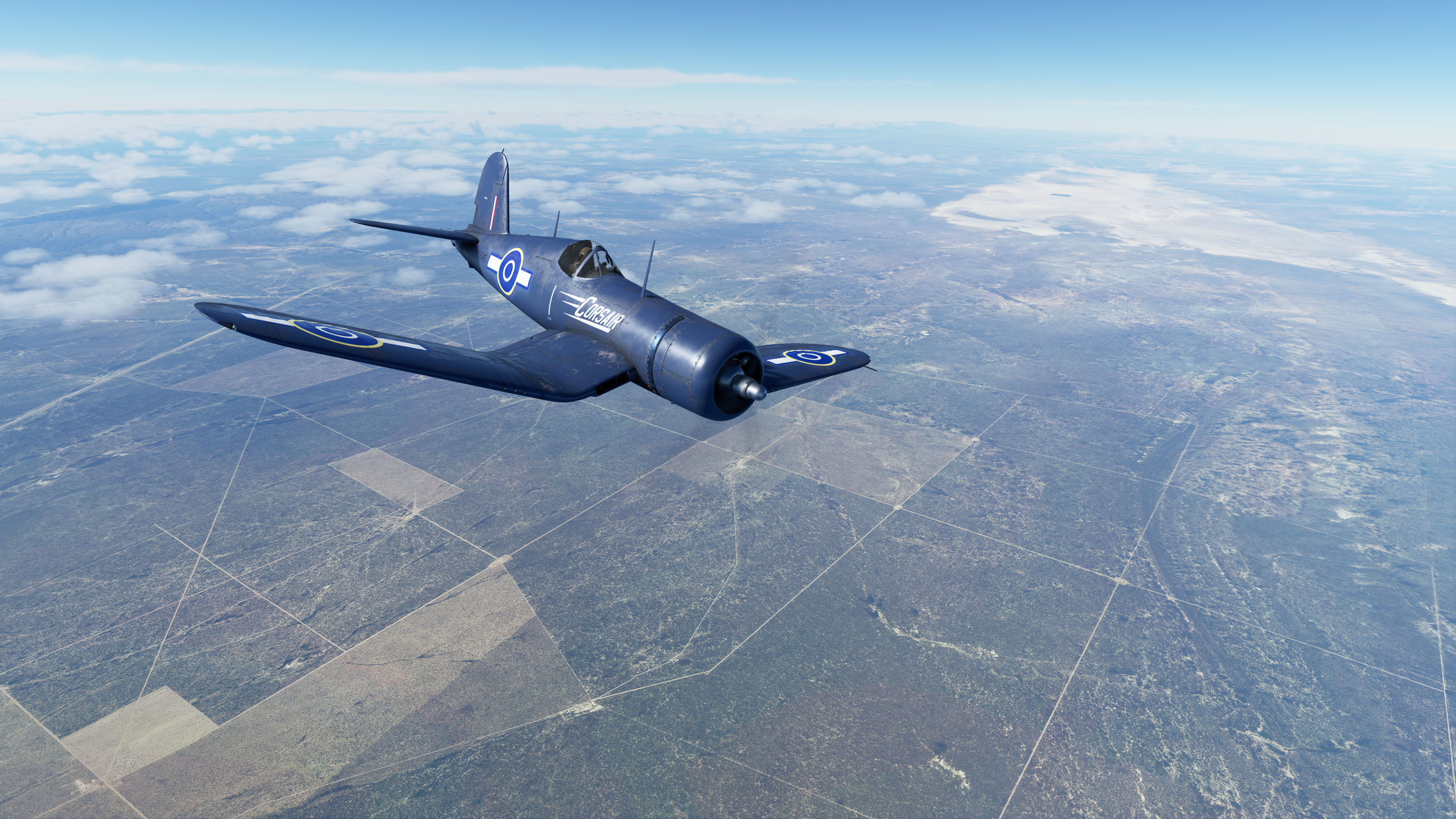 On the way to an almost perfect 3-point landing. After one small bounce, but who’s counting? This is a fabulous bird.

Argentina is fantastic to fly in; it’s got such a wide range of topographies from mountain, desert, tundra, pampas. You need a fast plane though, but I see you’ve got that sorted ;)

Guy at work challenged me to fly through the arch at Arches National Park.

He didn’t mention 500 knots, but I threw that part in to make it more exciting. Got it on the first try! 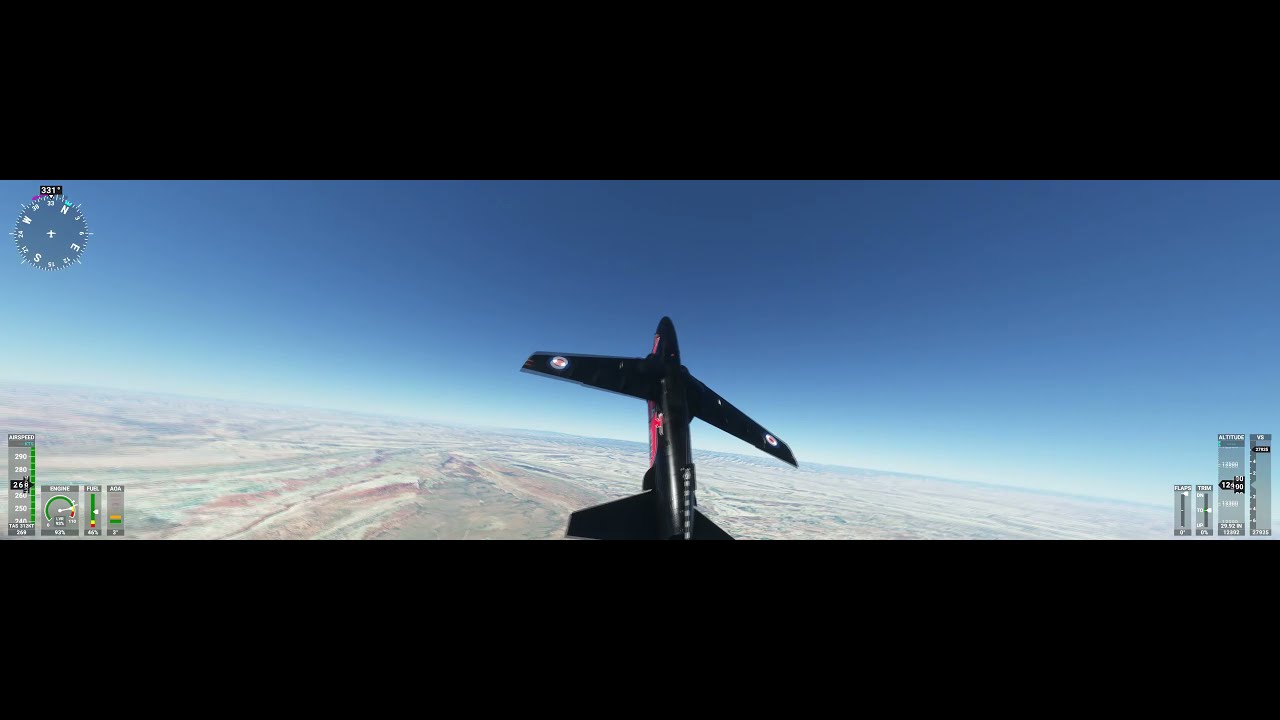 I’m 12 successful legs into the Breckenridge Bush trip now, as of last night. Some of these are very tricky.

I have to admit, when I first saw that there were only 4 bush trips, including the new one that got added in the last update, I was thinking there wasn’t much content there, but just this first Bush trip is pretty epic. 12 legs already, all at least 20 minutes, sometimes more. In terms of substituting for a campaign in this game, if the other 3 Bush trips are this epic too, then this is a lot of hours of content just in these bush trips.

Once I do get done with these, I found a website online where people have made many, many more:

@Pedro, IIRC, you made a bush trip upthread as well right? Maybe after I get done with the official ones, I’ll do yours next.

Yeah, I’ve been meaning to dive back into the official content, but I’ve been so focused on FSE/Neofly that I haven’t had time. I still need to do Alaska, and I’m probably just about competent enough by now for the landing challenges to be worth having a crack at. Tried the Courchevel one about two dozen times at launch and never nailed it, let alone got a decent score.

That reminds me that I haven’t done the Alaska trip either.

@Rock8man Yeah, they are quite the epic trips; by the time you’re finished with them you’ll probably want to do something else, though the other bush trips are a bit shorter.

I created a couple of trips; my first one was around my home area and it was the third user-created trip released, I believe. I spent a lot of time figuring out how to actually create it, and I can’t remember the quality, so I’ll not link that one.

However, my pride and joy :P

✓ Southwest U.S. Bush Trip is a Microsoft Flight Simulator 2020 mod created by Chopper. Download for free to enhance your experience in MSFS 2020.

Unfortunately it also weighs in at a gargantuan 27 legs, so much respect if you ever get to it ;)

It’s also interesting that this Breckenridge Bush trip really highlights both the game’s strengths and weaknesses.

I haven’t played FS in a while but have they fixed the endless lights on rural roads issue?

I haven’t done too much night time flying yet. So the issue was that they put lights throughout rural roads?

I’m not sure if that’s a bad thing.

I saw a beautiful photograph on Windows the other day, in that log-in screen for Windows 10, you know? It was a beautiful picture of rolling hills and water and rocks and snow and green grass and bushes. Apparently it was a picture of “the land of fire and ice” in Kamchatka peninsula in Russia. So I looked up the location of that photo and went there in Flight Simulator. And it happened to be night time and I could see absolutely nothing. It was just blackness. Complete darkness.

I then changed the time to daytime and plopped myself in the same spot again and discovered it highlights a lot of the game’s weaknesses that I talked about above. Everything was just a flat texture, no vegetation, no real snow, just white texture on hills or green texture, it looked pretty ugly.

Anyway, my point was that I’m not opposed to seeing lights on rural roads at night so that I can make out something at night instead of flying in total darkness.

It’s …pretty over the top. I’ve disassembled my gaming PC but I’ll try to show some examples.

I just finished the Balkans bush trip myself. Lovely flight, pretty scenic. I was amused to be awarded an achievement on completion for not using nav aids, or something. I mean…they give you a complete flight plan pre-loaded into your Garmin. I’m not sure what else you could possibly want!

Someone on flightsim.to has uploaded a Chernobyl bush trip with links to some scenery to amplify it. I’m definitely going to give that a try.

It seems like very few people are doing the bush trips. That Steam achievement has a 0.7% completion rate, and the other two bush trips are similar. And from flightsim.to, it looks like the bushtrip ‘community’ is probably a core of only about 2,000 people. Last year a new trip might get 800-1000 downloads; now it is more like 400-600.

Understandable, there’s a lot of alternate activities, from simming various planes to activities like Air Hauler and FSE. I can’t really talk either; despite making a couple of bush trips, I’ve completed very few of other peoples’.

I haven’t played FS in a while but have they fixed the endless lights on rural roads issue?

They’ve improved it greatly. The main road in an area still tends to be lit, though a little more sparsely than before, but in general it’s much better.

The town on the right doesn’t have a lit road going to it for example: 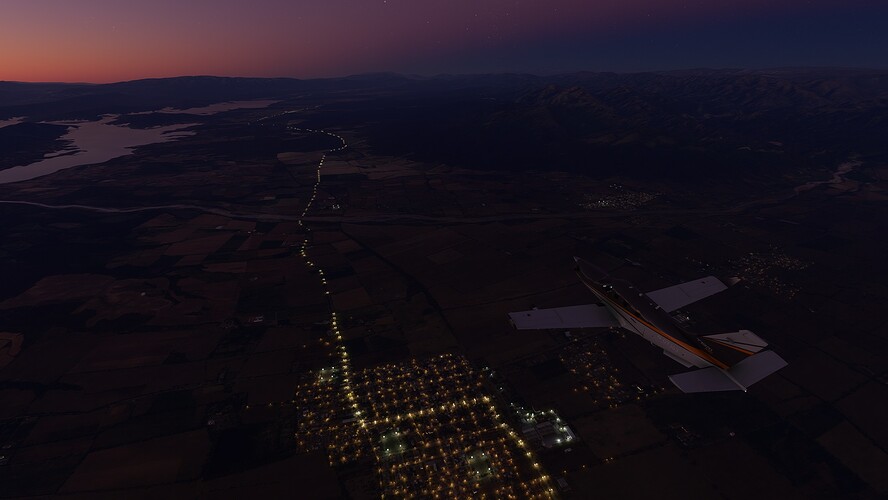 While the general area (reasonably populated) is more believeable: 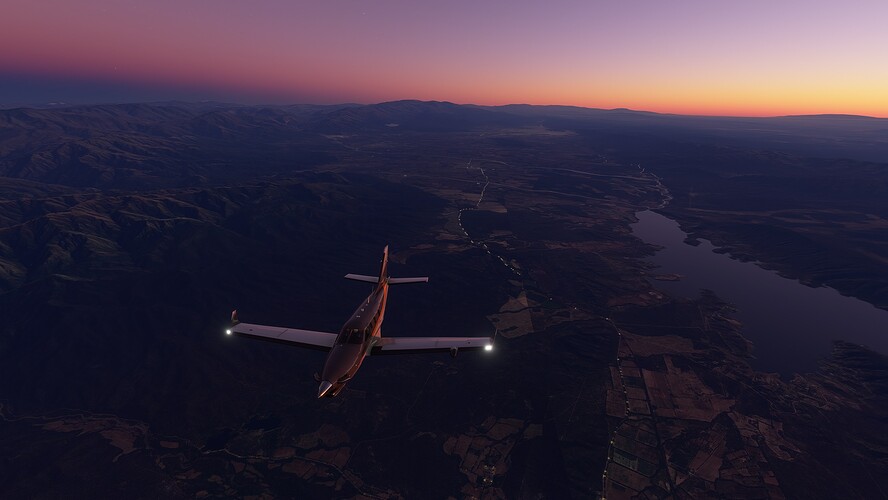