Is this the part where I say I’m somewhat happy I don’t have a daughter? I’ve heard having a daughter could be complicated but I never imagined it could be like that.

You can google it if you want. It’s not something that you will take any joy from.

Oh come on, somebody recount the horrible way she was written out of the Avengers. 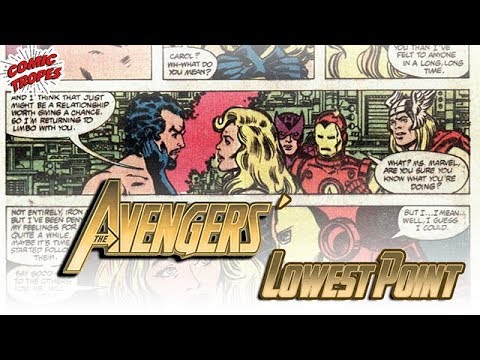 If you don’t want to watch a 15-minute video, the VERY brief summary from Screenrant:

The story opens with Carol Danvers about to give birth to a child. She has absolutely no idea who the father is, but the entire pregnancy has taken place over just a few days. When the baby is born, it grows to adulthood at an insane speed, and reveals that it is really a cosmic entity called Marcus. Feeling lonely, Marcus decided to woo Carol, and so summoned her into his “Limbo” dimension. There, he did everything within his power to earn her affection; to aid his purposes, he summoned others from Earth’s history to help. Shakespeare wrote Carol a sonnet, Beethoven an original prelude in her honor, and Marie Antoinette clothed her in the finest satins and silks. After weeks of effort - with a boost from mind-altering machines left behind by Marcus’ father Immortus - Carol consented, and Marcus had sex with her. He then sent her back to her own time, erasing all memory of what had happened, and planted his own consciousness within the fetus.

So… Marcus is his own father, and Carol Danver’s own son raped her to cause his own birth.

But was weird as this whole story is, the truly terrible thing is how it ended: After Marcus’s plans to rescue his father (Immortus) from some other dimension is foiled, it becomes clear that he (Marcus) cannot remain in our reality and has to return to “Limbo”. Carol Danvers says that she has fallen in love with him (her rapist/son) and wants to go with him. The Avengers, despite having just defeated him, think that it’s just FINE to send Ms. Marvel with this guy that they just met and is definitely their enemy to live in another dimension forever… and in fact they help to make that happen.

Great, now I’m imagining that the main reason Captain Marvel was AWOL in all the recent MCU movies is because she’s busy getting it on in a booty call.

That does indeed feel like a terrible story-line. Written by Claremont, perchance?

Jim Shooter, David Michelinie, Bob Layton, and George Pérez are credited as the authors. I think three of the four have come forward to apologize or disown the story.

Clairmont was actually involved in a follow-on story (about a year later in Avengers Annual #10) where Carol Danvers comes back and dresses down the Avengers for abetting her abuse. According to Clairmont, this was done at least partially due to fan-outrage fallout from Avenger #200.

Clairmont was actually involved in a follow-on story (about a year later in Avengers Annual #10) where Carol Danvers comes back and dresses down the Avengers for abetting her abuse. According to Clairmont, this was done at least partially due to fan-outrage fallout from Avenger #200.

Yes, Claremont definitely made sure that Carol Danvers yelled at them for letting her go. And really, what a horrible, idiotic way to get rid of a character in the first place! “Disrespectful” doesn’t even begin to cover it.

Weird is a very generous description of that storyline!

Wow comics can be really fucked up.

The weird thing is, you can get rid of characters in so many ways, including just having them…not show up anymore. Carol Danvers was already depowered, so she could just go “Oh hey maybe I shouldn’t be in the Avengers anymore. Byeeeeeee!” You don’t have to send her off to Limbo where she will spend eternity alone with her husband/son. Ick.

Yeah that is just so gross. Wtf.

This is why I was a DC fan as a kid. Marvel’s writing was absolutely terrible up through the 80’s. Cool characters and some fun Kirby stuff, but overall, bad enough that my 10-year-old self couldn’t stomach it.

I guess I should be glad the MCU hasn’t really dipped in that well.

Not to impugn the tastes of your ten-year-old self, but this specific terrible storyline was in no way emblematic of typical Marvel plotlines during or before the ’80s.

And DC has had its own…questionable methods for getting rid of female characters.

Ms. Marvel’s Powers Are ‘Not An Exact Translation’ From The Comics, Says...

Kamala Khan is getting a slightly different origin and power-set in the MCU's Ms. Marvel series, the Marvel boss tells Empire.

Most notably, as fans may have spotted in the trailers, Khan’s power-set looks to be a little different here – rather than stretching and morphing her body (“Embiggen!”), Kamala seems to have purple cosmic powers in the show. And while on page she was an Inhuman, her powers activated by the Terrigen Mist, there’s a different plan afoot here. “We adapt the comics; it’s not an exact translation,” Kevin Feige tells Empire . “[Kamala] came about in a very specific time within the comic-book continuity. She is now coming into a very specific time within the MCU continuity. And those two things didn’t match.” The new origins for Khan’s powers looks set to be part of the journey of the show. “What we will learn about where those powers come from, and how they come about, is specific to the MCU,” Feige teases. “You will see great comic splash panels in some of our action sequences. If you want big, giant hands and arms, well they’re here in spirit, if not in stretchy, plastic-type ways.”

That’s probably pretty OK. I tend to think that her “Embiggen!” powers would have looked terrible in live-action.