What’s a good arcade racer (with wheel support) for a 7 year old? Major bonus if it has automatic throttle, although he can kind of reach the pedals in my normal layout.

Don’t know about ‘racer’, but my nephews love the Forza Horizon games because they can go off the track and smash through stuff without getting reset. And they like collecting many of their favourite cars, especially on the wheel spins. ;)

Actually these days the big one is BeamNG, which is more about smashing that driving/racing!

I just started playing this one and I could see it being pretty kid friendly.

When my boys were that age I actually started them with sims, but with difficulty turned down and aids on. This was a fair few years ago so the games they played are all gone now, but I’ll give modern examples. They really liked driving a big rig so Euro truck or American truck simulator, both should be cheap. Then a cheap racing sim you could download lots of cars/tracks for, like maybe AC.

They liked the emergent play more than the missions or races, like can I drive my 18 wheeler through this back alley or how far can I jump this car off track.

Another good modern suggestion is wreckfest.

Honest question: What does Raceroom bring to the table to someone who AC, ACC, and subbed to iRacing?

Sorry, I forgot to come back to this.

The reason we went to Raceroom was because of the generous DLC policy they have.

My league had run three seasons on the original Project Cars before we got tired of this sort of nonsense and we went to look for a new game.

Assetto Corsa was the early favourite, but the way their DLC worked was rigid and expensive - if I want to race the Porsche 911 GT3 Cup 2017 and you want to race the McLaren 650 GT3 then everyone in the league has to own both the appropriate Porsche pack and Dream Pack 3.

Meanwhile, in Raceroom all you had to own was the car you want to drive. When we raced WTCR last year I bought the Seat with one livery for $2 and I was set for the season. (I already own all the tracks courtesy of various track packs.)

The DLC thing is less of a problem now for Assetto Corsa, because the complete version with all add-ons is frequently available for less than $10 and we did look at moving games for this season.

However, when we looked at how easy it would be to mirror our current league setup in AC it looked challenging at best, even with the AC Content Manager app.

Our league runs two races at most events that are different lengths and the second one is a complete reverse grid. We also use competition ballast.

Some of that was possible to get to with AC, although making the two races different lengths stumped me.

R3E’s dedicated server software makes all of this tremendously easy - it takes literally a few clicks and you can save the rule setup so that for each event you only have to change the track and time of day settings.

On top of this, the netcode is really excellent. We’re mostly US and Canada based, but we have had racers from the UK and South Africa join in without problem. We frequently race touring car seasons and we can race wheel-to-wheel and bang doors like proper Tourers without worrying about being fired off into the scenery.

On top of that, all of the stuff @spec10 says about the growing online racing system is true. I haven’t used it too much, but the safety and skill ratings are rounding out nicely and once you’ve built your own rep scores it’s possible to drop in to a split full of randoms who you can expect to race competitively but (mostly!) fairly.

For me ACC is still my favourite of the current sims, but the wider car choice means that Raceroom does challenge it. Raceroom’s AI is much better than AC and joining online races is easier than AC’s weird browser, so R3E beats AC for both off and online racing.

If Reiza can continue to improve AMS2 then that’ll nudge into second place, (because holy shit do I love Reiza), but Raceroom is such low effort to have so much fun that it’ll be sure to be in my rotation for a while to come.

I agree, the ACC and AC race setup utilities are severely lacking. Our league admins spend way too much time mucking with it as is, much less with reversed grids and such. ACC however pulls in alot of racers for us, more than iRacing currently does.

We use AC for our historics series and it gets decent numbers. They rotate cars, but basically anything 80s and older but often 60-70s cars/tracks. Huge amount of content available for folks who like driving the classic cars and tracks in AC. 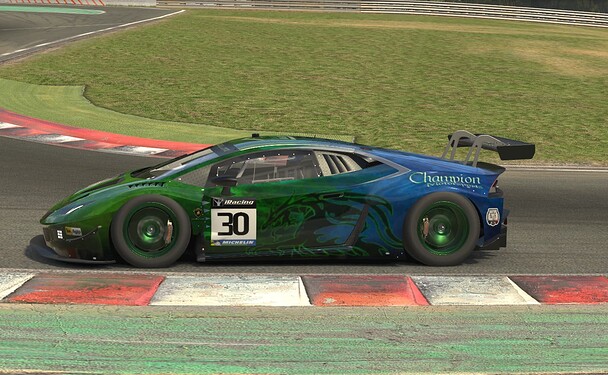 My league had run three seasons on the original Project Cars before we got tired of this sort of nonsense and we went to look for a new game.

That was one hell of a recovery!

Anyone playing F1 2021? I’m curious how My Team plays, whether the liveries are tolerable (from screenshots they look very much lame compared with actual F1 car designs), and whether career mode has more than a couple of seasons of depth.

Damn Drive to Survive on Netflix got me thinking about this

I was very amused by the description of the new RIMS motorcycle racing game.

I've never played a racing game quite like Rims

I was excited for Rims before I saw it was $45 with a bunch of added for-money DLC on top. The demo was solid, so I’ll give it a shot once the inevitable sale lands.

For now, if you want to frighten yourself on road bikes, Milestone’s Ride 4 will do that for you for $25 and doesn’t require you to bust out some Car Mechanic Simulator-style triage when you dump the bike.

Shit, if you lose Bismarck on your racing game you done fucked up.

Haha! They only “lost” me because I think the whole pack of everything comes to about $80 and I have so many games, racing and otherwise, that I don’t really need to buy full price anything these days.

Is Ride welcoming to more novice/arcade players, by the way?

The bikes have less built-in electronic help than the MotoGP racing versions, but there are are a lot of game assists that can be switched on, for stability, braking assistance etc.

Also the huge range of available bikes means you can find something pretty “cruisy” to learn on and develop the riding skills required.

Edit : Also also, I like to post videos of Ride from first-person mainly because from that angle the speed and the tracks look bananas, but third-person is available and used by most people who play the game.

Answering my own question a bit: there are daily car designs available for purchase and even getting one or two is enough to turn the livery into something resembling real life.

I couldn’t resist and bought the game. My Team is pretty in depth for a career mode in a hands-on sim. It’s about on par with Motorsport Manager. I haven’t tried the single player story mode yet (Braking Point). While it’s early, I would say fears of this not being multiple seasons worth of depth are probably unfounded (having last played in 2018, it’s clearly come a long way).

I still think they need to add driver moves and retirements into it, though. Having the same guys stick around the same teams season after season is fantasy-4th-wall-breaking.

EDIT, for those checking the historical accuracy of my posts! ;) : They totally have driver moves and retirements. I just didn’t see that at first, but now I do.

After talking about it for over a decade, I finally signed up for iRacing and completed my first race. 4th place at Oran Park in a Mazda MX-5. A big crash ahead of me took out half the field, then the remaining 5 of us finished it off. Completely clean for a +0.15 safety rating, which is what really matters!

Grats! I think everyone’s first iRace includes the line “a big crash took out half the field.”

Yes, I had heard the best way to get out of Rookie is to stay at the back of the field and don’t make contact. I decided to drive at my own pace, but I wasn’t really upset when I qualified more poorly than usual and started down in 7th, with only 5 cars behind me. I saw the incident up ahead, calmly drove through it, and said to myself, “there but for the grace of God go I.”

I’ll be driving the hell out of the MX-5 and the Vee. Honestly not sure I’ll bother with the dirt and oval stuff. I’m sure it’s fun but I want to use my limited time wisely. We’ll see, not like I’m going to do that in any other sims.

I was going to win my first Formula V race. 11 seconds clear with three laps to go when this happened.