SARS: It Gets Worse (or Fuckin' Fuckity Fuck)

Richard Fisher, a senior fellow at the Jamestown Foundation, a Washington-based think tank, said the theory shouldn’t be ruled out.

Other China-watchers are more sceptical however, pointing to a lack of any hard evidence.

If this does bear out, and those initial stories of the first patients being squirrelled away in a military hospital in China had me suspicious, I really hope it’s a Chinese bioweapon that got out of hand and not something somebody else was testing out.

They said, on South park, the cure for SARS is Nyquil, and chicken soup. :)

They said, on South park, the cure for SARS is Nyquil, and chicken soup. :)

Good luck getting Sprite around here though, they got that shitty Sierra Mist on tap. Thanks a hell of a lot Sierra.

If this does bear out, and those initial stories of the first patients being squirrelled away in a military hospital in China had me suspicious, I really hope it’s a Chinese bioweapon that got out of hand and not something somebody else was testing out.

I have no idea what this statement means. Who is the “somebody else”?

If SARs is a bioweapon, it is the most laughably inefficient one ever created. A 3-5% worldwide mortality rate? I wish more countries had weapons that ineffectual.

Are you nuts? First of all, do the math. If SARS spreads to the general population – not exactly impossible, considering the way that it seems to live for hours on any and all surfaces – and hits, say, 100 million people in North America, that 3-5% would become 3-5 million people. Young people are dying of the disease as well. A 39-year-old died of SARS in Toronto today. Also, there are concerns about mutations, and lingering questions about what SARS actually is. Some researchers have found SARS patients with no trace of the coronavirus said to be the root cause, and perfectly healthy people that do have traces of coronavirus in their systems. A great deal is unknown about the nature of SARS, including how it is spread. There were and are very good reasons for the quarantines.

And then there’s the massive economic damage. The healh system in Toronto was overloaded by SARS and the threat of SARS. Businesses were drastically affected. It is even worse in China, where cities are being completely shut down. Imagine that sort of thing in every major city in North America and Europe. The results would be catastrophic for the global economy.

There’s good reason to predict that SARS will turn out to be a natural phenomenon, not a biological weapon: it has originated in the breeding ground for the flu. Southeast Asia is where many, maybe most, flu epidemics get started, probably due to agricultural practices.

Listen to these quotes from a Nature magazine article from Jan. 2002 predicting a “killer flu”:

[i]Such killer strains strike every 30-40 years: “It’s now 34 years since the last pandemic; that’s why everyone is quite twitchy,” says Brown.

The danger was highlighted in 1997, when six of 18 people infected were killed by a ‘bird flu’ that crossed into humans in the poultry markets of Hong Kong. Unable to spread from person to person, this flu died with its victims - but another killer flu is expected to follow. “It could spread across the globe before a vaccine could be prepared,” says Brown.

Most predict that the next pandemic will emerge in Southeast Asia, like the previous two. There, wild birds, poultry, pigs and people mix in the market-places. “Live poultry markets are the breeding ground of these viruses,” says Robert Webster.[/i]

If SARS spreads to the general population – not exactly impossible, considering the way that it seems to live for hours on any and all surfaces – and hits, say, 100 million people in North America, that 3-5% would become 3-5 million people.

Meanwhile, at the Whitehouse…

The supervillain behind it all:

Hey Ari, I think I figured out how to lower the unemployment rate.

Are you nuts? First of all, do the math. If SARS spreads to the general population – not exactly impossible, considering the way that it seems to live for hours on any and all surfaces – and hits, say, 100 million people in North America, that 3-5% would become 3-5 million people. Young people are dying of the disease as well. A 39-year-old died of SARS in Toronto today.

Please don’t take what I’m about to say as being an endorsement of the idea that 3-5 million deaths out of a hundred million infected is anything to sneeze at. However, from a biological weapons perspective, a 3-5% casualty rate is very low. Botulinun Toxin, for example, has about a 65% mortality rate. Small pox has about a 35% mortality rate. Although my source (http://www.stimson.org/cbw/?sn=cb2001112953) doesn’t list the percentages for ricin or anthrax, I think both of those are up above 80% if weaponized properly. Incidentally, one press source listed smallpox, anthrax, the Plague, tularemia, botulism and viral hemorrhagic fever as the “bioweapons of choice” for terrorists, because they’re highly contagious and have high mortality rates.

The idea of SARS as a bioweapon is possible, but if it’s a bioweapon, it’s a pretty poor one. Again, that’s not to minimize the suffering it has caused, or the economic damage it has done, but imagine if SARS had killed millions of people already. That’s what we’d be looking at if a major bioweapons attack hit a major city (NY, Beijing, etc.)

The problem with SARS is the same problem there was with West Nile last year; it’s hard to know exactly how fatal it is.

The symptoms of SARS are the same as a cold or flu. So it’s hard to know exactly how fatal it is because most cases probably aren’t being reported. Combine the lightness of symptoms with a threat of quarentine, and I’m willing to bet dollars to donuts that there are many more people in Toronto who are infected (and many who have recovered) who aren’t reporting it.

If you go by the official Ontario government numbers, there have been 264 total cases (counting suspected but unconfirmed cases) that have resulted in 21 deaths with 6 more people in critical or failing condition. That’s creeping up to a 10% mortality rate based on reported cases, but it’s hard to report that as a hard number.

As for it being a bio weapon… as others have mentioned, it would make a horrible bioweapon. 9 day incubation period, low communicability rate, and a low mortality rate. If you’re going to use a bio weapon, you want a low incubation, highly infectious, and to kill fast enough that it won’t have a chance to spread back into your own country.

For spreading terror, that’s the presses doing. You give it a name like SARS and suddenly you have something to fear. Call it a new cold strain that causes more severe symptoms than usual and you just have people who stay home for a week, bring their Day-Quil and Sprite, and show up back to work as good as new. But right now there is all this panic because the press is making sure you panic. They want you glued to that TV set, sweating, waiting for another update to know if tomorrow is the day you catch “The SARS”. 264 suspected cases, less than 150 listed as probable, and we have a world wide epidemic.

btw can anyone tell me the function of WHO since the outbreak? cause it seems to me that they are just a bunch of talking heads who tour around different countries and then reiterate things that even the general public knows.

for all the information that they demanded, theres still a “not available” on the WHO Cumulative Number of Reported Probable Cases of Severe Acute Respiratory Syndrome (SARS) page…

According to CNN, there have been approximately 5600 cases reported so far, 3647 of which are from China.

According to the article, there are also 52 recorded cases in the U.S. (0 deaths). It doesn’t state numbers from other countries.

My 264 cases in Ontario number came from the Ontario Ministry of Health website:

Looks like a new report was released today stating that the official count (including suspected but unconfirmed cases) is 262 cases. 2 of the suspected cases were determined not to be SARS.

Below is a list of the deaths in Ontario so far, including the victim’s ages:

There was also a 46 year old woman who died in the Phillipines that contracted the virus while in Toronto and is considered an Ontario Death.

I’m not trying to say that the press should ignore it, or that we shouldn’t report on SARS because there have been no U.S. deaths, if that is what you were implying.

I’m just saying that right now, if the only information you had came from CNN and local news (here in Omaha at least), you’d think SARS was the end of the world with a 90% mortality rate. Reports like “Will your surgical mask protect you from SARS?” serve no purpose but to scare people and keep them watching.

You need look no further than the WHO quarantine of Toronto to realize that everything is being blown way out of proportion. And here in the U.S. we have people cancelling vacation trips to Denver, L.A., Vegas, or whereever, because of the SARS reports. No cases reported, but people are in a panic because every news report tells how dangerous and deadly this virus is.

If cities start shutting down, it won’t be because of SARS. It will be because of the scare tactics of our own press system. Toronto hasn’t shut down, but its SARS cases are on the decline. No masks or city emergencies required.

WHO are acting as a clearing house for information, and dispensing information to doctors and scientists around the world. it’s easier for them to go into countries like china and find out what’s really happening as they’re seen as fairly impartial, just there to help.

they’re on the news cos their paychecks come from geneva and they all have long titles. and they actually are the ones who know the most on what is happening with regards to the virus.

Such killer strains strike every 30-40 years: “It’s now 34 years since the last pandemic; that’s why everyone is quite twitchy,” says Brown.

Well, absolutely. I mean, if I could count on viruses to have the good manners to wait precisely 30-40 years between serious attacks I’d be “twitchy” now too.

Ah ha! Japan is making it’s bid to take over China again! It’s time for China to make a pre-emptive strike in the name of national security!

Arise, thread! We have a new coronavirus outbreak!

How Does Wuhan Coronavirus Compare With MERS, SARS And The Common Cold?

The virus that has emerged in China is part of a family known as coronaviruses. Here's how some of the best-known coronaviruses compare with this newly identified member of the viral family. 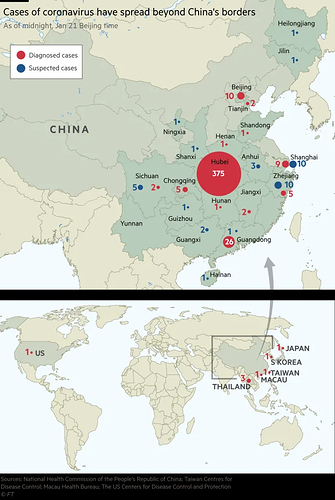 One confirmed US case so far, probably won’t be the last.

Time for me to watch Contagion again.

This is just like my last game of Pandemic!